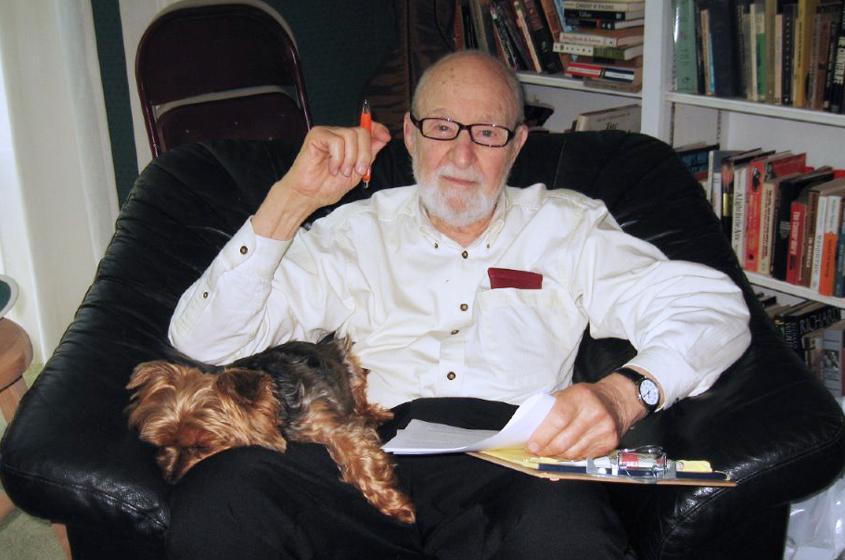 Dr. Robert R. Marshak, a 1945 DVM graduate of the Cornell University College of Veterinary Medicine (CVM), has been named winner of the 2016 Salmon Award for Distinguished Alumni Service. Dr. Marshak will formally receive the award at the annual fall conference of the New York State Veterinary Medical Society.

The Salmon Award recognizes and honors Cornell DVM graduates who have distinguished themselves in service to the profession, their communities, or the College. Daniel Elmer Salmon, a Cornell alumnus, earned the first DVM degree awarded in the United States. Dr. Salmon spent much of his career studying the nature and control of diseases of domestic animals for the U.S. Department of Agriculture. He established the federal meat inspection program and emphasized the public health significance of diseases transmissible from animals to man. Another Cornellian, Theobald Smith, named the genus Salmonella in Salmon’s honor.

Dr. Marshak said he is “deeply honored” to receive the Salmon Award. “Salmon was James Law’s first veterinary student at Cornell. Both Law and Salmon are in my pantheon of heroes. Their tremendous impact on veterinary medical education and research are still strongly felt.”

The same might be said of Dr. Marshak. When he was a DVM student, instruction in clinical veterinary medicine was rarely science- and evidenced-based and clinical research was virtually non-existent. Today is “vastly different,” he said. “Elite schools like Cornell, with excellent basic science and clinical departments and large research programs, create an intellectual environment that fosters the integration of teaching, research and patient care.”

Alfred Merritt, who nominated Dr. Marshak for the award, said the turnaround is in no small part due to the efforts of the honoree. “Bob inspired a generation of veterinary students through his passionate commitment to the highest levels of professional integrity and scientific excellence for the veterinary profession. These ideas, which were cutting-edge at the time, are now an integral part of our profession's academic mission and clinical offerings.”

The first eleven years of Dr. Marshak’s career were conventional enough: He owned a veterinary practice in Vermont that focused on dairy cattle. But he also published case studies and spent days off at Harvard’s Massachusetts General Hospital, studying calcium metabolism with special reference to milk fever in cows. In 1956, Dr. Marshak became professor and chair of the Department of Medicine at the University of Pennsylvania’s School of Veterinary Medicine.

Dr. Marshak soon developed strong and enduring relationships with Penn’s Medical School faculty. “Human medicine and animal medicine have so much in common,” he said, “and veterinary medicine has a lot to contribute, especially through comparative research, to our biomedical knowledge.”

Those relationships made it possible for Dr. Marshak to begin developing a broad spectrum of clinical specialties in veterinary medicine: “I would carefully select good students and try to interest them in training in anesthesiology, internal medicine, dermatology, orthopedic surgery, cardiology, and so forth—almost all the specialties we have today. I would pair interested students with the University Hospital’s medical disciplines and arrange with medical faculty for their training.”

Students returned from the medical school as specialists, but Dr. Marshak wasn’t finished with them yet. A lifelong advocate for the basic sciences as the essential underpinning for clinical practice, he also had them train in an appropriate basic science discipline to further their development as veterinarian-scientists.

“This was the post-World War II era, and there was all kinds of federal money for training and research,” said Dr. Marshak. “I could get any number of fellowships. I could pay students stipends while they trained at the medical school; I could bring them back to the veterinary school, have them get grants, develop a research unit with a lot of good science, then train other veterinarians in that discipline.”

Dr. Marshak served as Dean of the Penn Veterinary School from 1973 to 1987, and continued to emphasize scientific excellence and professional integrity. He encouraged his faculty in both basic and applied sciences to incorporate the latest findings into their classes. He was at the forefront of encouraging female student applicants to the School and hiring women as faculty. In 1990, Dr. Marshak was inducted into the prestigious National Academy of Medicine, one of very few veterinarians selected for that honor.

"Bob Marshak was constantly on the lookout for students who he thought had promise to be the next generation of veterinary scientists, who could influence the profession," said Dr. Kotlikoff. "Many, many outstanding faculty were tapped on the shoulder by Bob and inspired to think big. For some reason I was one of those people, and it had an extraordinary impact on me. I cannot adequately express the debt that I owe him for his confidence, direction, and mentorship over the past 35 years.”

Dean Lorin Warnick said Dr. Marshak has had a “profound impact” on veterinary medicine and education.

“His emphasis on scientific training has influenced generations of veterinary students for the better,” Warnick said. “We are proud to have him as an alumnus of Cornell’s College of Veterinary Medicine.”