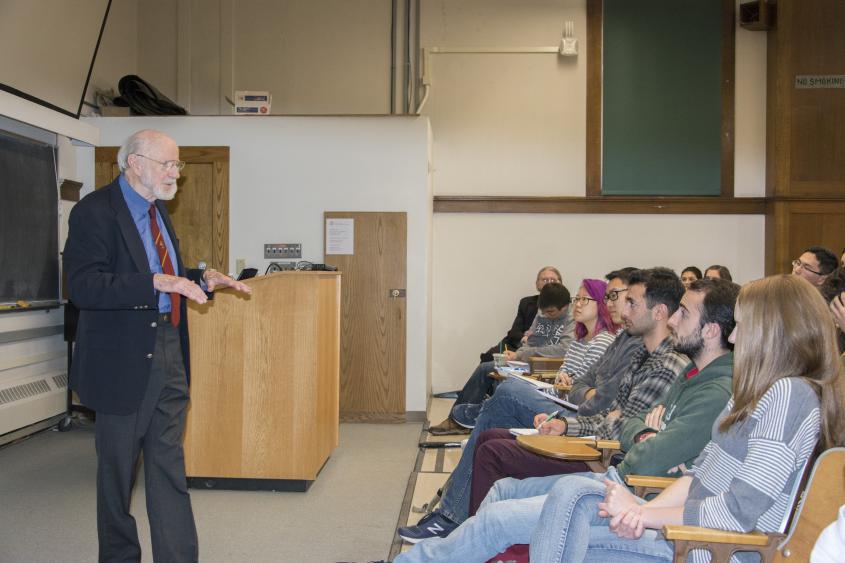 Dr. Campbell also met with students in two courses, including this presentation to a parasitology class.

William Campbell, PhD, first encountered parasites on his family’s farm in Ireland. Instead of being repelled, he was fascinated. In 1978, Dr. Campbell was working for Merck Institute for Therapeutic Research when a call went out for a radically new way to rid animals of parasitic infections. His collaboration with Japanese researcher Satoshi Omura of the Kitasato Institute led to the development of the antiparasitic drug ivermectin, for which they shared the Nobel Prize in Physiology or Medicine in 2015. On Oct. 13, 2016, Dr. Campbell described the process that resulted in the discovery of the drug for a standing room-only crowd on the Cornell campus.

Ivermectin was first shown to be effective against parasitic roundworms. As their name suggests, roundworms have round bodies and range in length from millimeters up to two meters. There are more than 15,000 species, some of which primarily infect humans and others that more commonly infect different animals: Think hookworms (people), heartworm (dogs) and encysted small strongyles (horses). Infection can lead to unwanted weight loss and other clinical signs ranging in severity from shortness of breath to blindness and, occasionally, death.

In approaching the challenge, Dr. Campbell decided against pursuing a solution via chemistry. “We wanted a sensationally novel anthelminthic,” he said, after his speech. “You can make novel chemicals, but because they are made by humans they are restricted by the limits of human knowledge.” Instead, he acquired thousands of microbial cultures from laboratories around the world. “Microbe metabolites are novel molecules,” Dr. Campbell said. “They aren’t limited to what we already know.”

In the end it came down to one mouse with a heavy parasite load that disappeared when it was treated with a substance called avermectin. “There was no ‘Eureka!’ moment,” Dr. Campbell told his Cornell audience. “There was subdued excitement, because the chances were good that it would all fall apart the next week.” But it didn’t.

Dr. Campbell turned avermectin over to Merck chemists, who hydrogenated it to produce an improved drug they dubbed ivermectin. They decided to test its efficacy against parasitic arthropods when one of the research rabbits at Merck presented with a heavily mite-infested ear. “We said, ‘Why not treat it with ivermectin?’” They did, and it worked. “This is how science progresses,” he said.

Humans also suffer from diseases related to roundworms. A sadly common example is onchocerciasis, also known as river blindness because it occurs near waterways where black flies are prevalent. The flies carry larvae of the roundworm Onchocerca volvulus and transmit them to people through their bite. The worms cause large nodules under the skin and unbearable itching. Adult female worms produce baby worms (microfilariae) that may enter the eye, and the infected person’s immune reaction against the microfilariae can severely damage the cornea and retina, causing permanent blindness. In Africa, onchocerciasis has caused whole communities to abandon their riverside villages and fertile farmland.

Ivermectin proved a powerful and blessedly simple preventive. “It is so easy to give,” said Dr. Campbell. One dose, given in pill form once or twice a year, made it possible to call together all village residents and treat them as a community. “It changed the face of public health drug delivery,” he said.

All through his talk Dr. Campbell stressed the importance of empirical screening in novel drug development, as opposed to relying solely on theoretical design. “We don’t know how to devise drug predictability,” he said, “but we have been able to devise drug unpredictability.”