The gift of hope: vets and donor team up to save pup 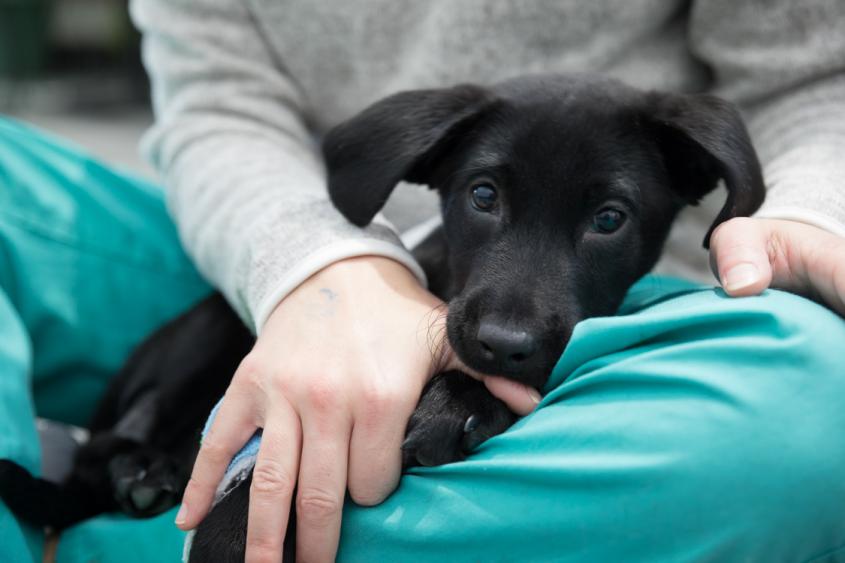 Jim is your classic black Labrador puppy--adorable and wriggly, with “Adopt Me!” written all over him. Yet he began life with a congenital heart defect that prevented him from getting adopted and threatened his life. However, thanks to a veterinary practice that wouldn’t give up on him; a gift from a donor’s charitable foundation; and a world-class clinical team at the Cornell University Hospital for Animals (CUHA), Jim is growing and thriving with his new family.

Jim was first brought as a six-week-old pup to Hoosick Veterinary Clinic in Hoosick, N.Y., by his owners—saying that the pup was vomiting after eating. The Hoosick veterinarians ran a barium study, which revealed an enlarged area of Jim’s esophagus—indicating that his food was being blocked from reaching his stomach. Hoosick veterinarian Dr. Caitlin Rooney and her team suspected the cause was a congenital heart issue in which a remnant blood vessel at the base of the heart lassos and traps the esophagus. Unfortunately, fixing that congenital issue required an expensive surgery at a higher-level hospital—and until then, Jim would require constant feeding with a liquid diet, making his daily care quite burdensome. As a result, Jim’s owners surrendered him to the Hoosick Veterinary Clinic. “This doesn’t happen often,” explains Rooney, “but he had a condition that could be fixed, and we knew he’d have no problem finding a home after that.”

In the meantime, Rooney and her colleagues called different veterinary hospitals to see if they would consider doing the heart surgery for a marked-down fee, as their practice could only cover a fraction of the cost. CUHA’s Dr. Galina Hayes, assistant professor of small animal surgery, heard Jim’s story and wanted to help. She reached out to Alison Smith, major gift officer at the College, hoping she might have an idea of how to cover the funds for the procedure. Luckily, Smith knew of just the person to help Jim.

Heart of the mission

Richard Lichter loves dogs. His charitable foundation, Richard Lichter Charity for Dogs, supports multiple causes for canines, including an extensive program for shelter dogs.  “Shelter dogs generally have hope for a better life, for love and for a family,” says Lichter. “However, some animals don’t even have hope because shelters, due to lack of resources, need to euthanize many dogs with treatable conditions. My foundation was set up to be the ultimate safety net for dogs.” The foundation has funded care for over 100 shelter dogs through Penn Vet’s Ryan Hospital and the Pennsylvania SPCA. This past October, the foundation was over budget and Lichter had decided not to initiate any new programs in 2016--until he got Smith’s call. “When I heard Jim’s story and I saw an innocent life that was about to be ended due to an unfortunate but treatable birth defect, I thought—this really gets to the heart of what our mission is. So an exception was made for Jim—he was a perfect recipient of a second chance for life.” With funding in place from Lichter, Rooney took Jim to CUHA, where he had a full CT angiogram to get a 3D image of his heart. “This is a very specialized CT scan,” says Hayes. “It’s so comprehensive a roadmap that I barely have to do any dissection during the surgery—I already know what’s there from viewing the angiogram.” As the Hoosick Veterinary Clinic team had suspected, Jim suffered from a condition known as a persistent right aortic arch, in which a malformed heart ligament loops over the base of the heart, pinching the esophagus.

To fix the issue, Hayes and her team performed a 45-minute thoracic surgery to snip the offending ligament and free the esophagus. Rooney came in to observe the procedure. “That was probably the coolest surgery I’ve ever seen,” she says.

The procedure is a culmination of many kinds of expertise: “This was not a routine case—it really requires multiple specialties to work together,” says Hayes. “We needed anesthesiology to do a specialized block on his chest; we needed radiology to do the CT angiogram; we needed our surgical techs who have scrubbed in to thousands of surgeries and know exactly what kind of tool to hand you at exactly the right time. The co-ordination of all of these components is what ultimately results in good surgical outcomes.”

Jim recovered well from the surgery. After taking him back to Hoosick Falls, Rooney and rest of the team slowly grad uated him from a liquid diet onto solid food. “He’s doing wonderfully,” she says. Best of all, Jim found his forever home just in time for Thanksgiving, where he’s been living life as a normal healthy puppy.

For Rooney, it’s been a heartwarming journey. The best part about Jim’s story for me is that it proves how devoted everyone is in the veterinary field,” she says. “Without everyone’s help it wouldn’t have been possible.”

Lichter loves that his charity has made Jim’s journey possible, noting how the lifesaving care is just as much a gift to the clinicians as it is to the dogs. “It can be a terrible thing when you’ve been trained to save an animal’s life, but you can’t do it simply because the financing isn’t there. My goal is to create partnerships to save these dogs lives,” he says. “We provide financing, but we also need our veterinarian partners to make it all happen.”