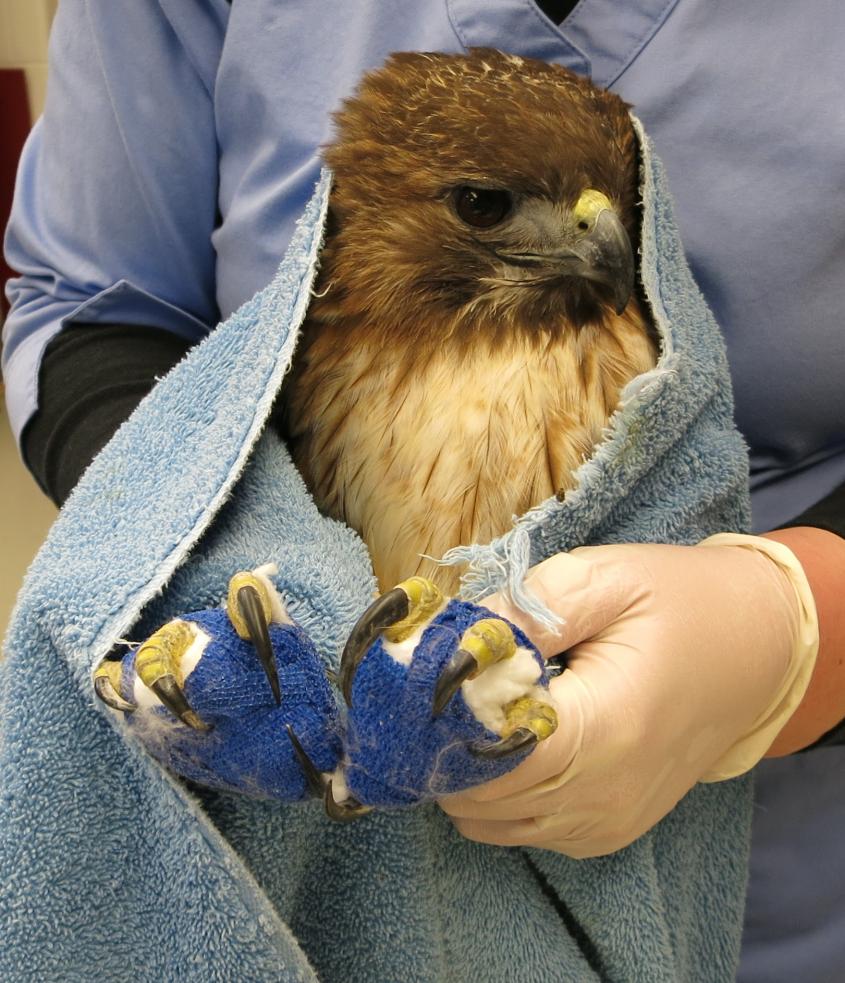 Lead is toxic to both humans and animals, and is present in our environment. On a regular basis, the staff at the Janet L. Swanson Wildlife Hospital at Cornell University work to save animals that are severely ill due to ingestion of environmental lead. On February 19th, 2017, an adult red-tailed hawk was brought to the Wildlife Health Center after being found in Lansing, NY—weak and unable to fly or move its legs. The Wildlife Health Center team found no fractures on the hawk’s radiographs, however, they did see a small metal object in the intestinal tract.

A blood test confirmed an extremely high lead level—so high that the bird was given a very grave prognosis for survival. After six weeks of intensive medical care and physical therapy at the wildlife hospital, it had regained some nerve function to the legs and was able to stand for short periods of time. The hawk was then transferred to a local licensed wildlife rehabilitator and raptor expert Morgan Hapeman at the Finger Lakes Raptor Center, who provided further care and physical therapy for eight more weeks until had regained normal strength and function. Finally, on June 1, 2017, the team of diligent clinicians and care-takers released the hawk back into the wild near its original territory in Lansing.

“Lead toxicity is a common in wild animals brought to the wildlife hospital, and many of those affected do not survive,” says Dr. Sara Childs-Sanford, chief of service at the Janet L. Swanson Wildlife Hospital. “This hawk was most likely exposed by accidentally swallowing a lead pellet while feeding on an animal that was shot. Humans contaminate the environment with lead through the use of bullets and fishing tackle made from lead.” Childs-Sanford explains that public awareness about the devastating impact of lead poisoning on wildlife populations will help to reduce the use of lead in sport hunting and fishing, improving the health of our ecosystems and saving the lives of wild animals.

The Janet L. Swanson Wildlife Hospital is a non-profit, donation-funded service of the Cornell University Hospital for Animals, providing state-of-the-art medical and surgical care for ill and injured native wildlife.