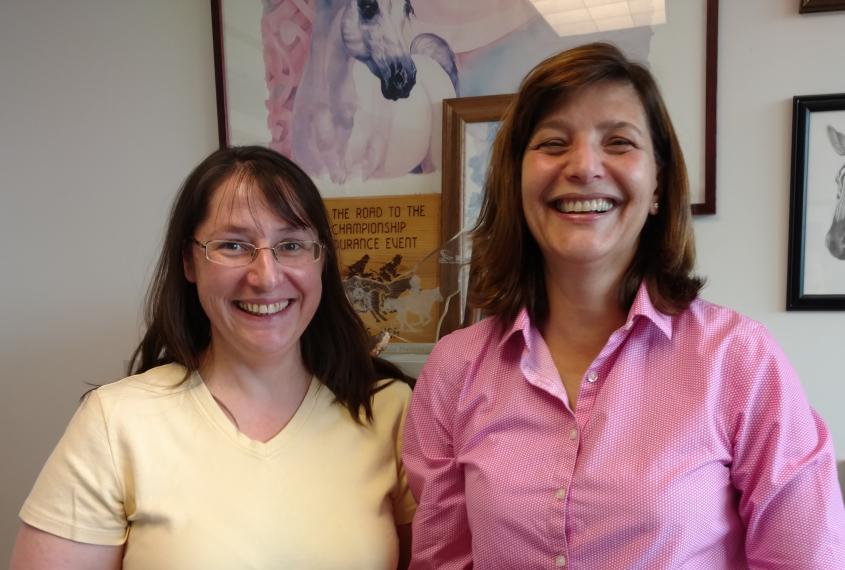 Dr. Julia Felippe, associate professor of large animal medicine, and Research Associate Dr. Rebecca Tallmadge have used a new method to measure tiny amounts of antibodies in foals, a finding described in the May 16 issue of PLOS ONE, and sponsored by the USDA-NIFA. The new methodology will help understand how fast a foal starts producing its own antibodies, which in turn will help optimize recommendations for young horse vaccination schedules.

Newborn horses are initially protected against diseases by an army of antibodies that they receive after birth through the colostrum produced by their dam. Vaccination is an important strategy to protect neonates against diseases. However,

administrating vaccines too early in life may have negative effects. Vaccines work by presenting the immune system with a killed pathogen (or a protein from it) that will “train” the body to recognize it as an intruder. If the immune system of the young animal is not ready, instead of recognizing the pathogen’s protein in the vaccine as foreign, it may identify it as ‘self’ and impair the production of an immune response against this particular pathogen. Additionally, the mother’s antibodies may interfere with the neonate’s antibody production, making the vaccine ineffective. To develop a protective vaccination strategy, it is therefore crucial to understand how young animals become immunocompetent.

The downside of a caring mother

Monitoring the development of the neonatal immune system using traditional methods, such as an antibody count in the foal’s blood, is hampered by the fact that maternal antibodies are abundant relative to the young’s own. The maternal antibodies wear off progressively as the young animal ages, but this may take a few months depending on the half-life of the different antibodies. Current guidelines recommend vaccination of foals to start at three months, or at six months of age if the dam was vaccinated in late gestation. “We presume that if the mother is vaccinated in her last month of pregnancy, her antibodies will transfer to the foal, but in reality we don’t measure the efficiency of this process,” says Felippe. Previous work had led Felippe and Tallmadge to believe that the foal immune system could respond to vaccines very early in life, and the team decided to test this hypothesis. They vaccinated three-day-old foals, gave them boosters at age 21 and 35 days, and followed the foals’ immune response up to 42 days after birth.

Inside the antibody factory

To overcome the challenge of counting antibodies in such young foals, Felippe and Tallmadge examined the foals’ B cells, the cells that create antibodies. This allowed them to examine the foal's immune response alone, independently of the maternal circulating antibodies in the early age. Additionally, B cells take up to ten days before releasing the antibodies they created. “After they find a match for the antibody, B cells adjust and tweak their antibody to make a perfect fit for the pathogen,” says Felippe. “They are amazing, they are like little factories.” The DNA changes that occur in the B cells’ maturation process can thus be tracked through time by sequencing their DNA.

As the researchers gave boosters to the foals, they observed an increase in the diversity of mutations in the B cell DNA as those immune cells kept looking for a better fit to the antigen. “Testing antigen-specific B cells gave us beautiful responses,” says Tallmadge. This suggests that foals start producing antibodies in the first days of age when vaccinated. Yet results were different depending on the type of vaccine. "Our results suggested that some vaccines may induce higher production of antibodies than others," says Felippe. “However, our experiment was not designed to measure efficacy of certain vaccines." Rather, its aims was to explore the neonate’s immune response almost in real time, and with more sensitivity, without confounding circulating maternal antibodies.

“Our approach can be applied to any vaccine or pathogen in any host species,” says Tallmadge. After showing that neonates are capable of an immune response, the researchers now want to see if there are neonate-specific mechanisms designed to prevent this response. “The reason why such a mechanism would exist is, imagine you live in the womb, very protected, and now you are out in the environment with billions of pathogens poking you for an immune response. If you respond to every stimulus with the same intensity at the same time, something might happen with you,” says Felippe. “So, there may be something out there that prevents you from damaging yourself in this process, and prioritizes a response to a stimulus that is relevant.”