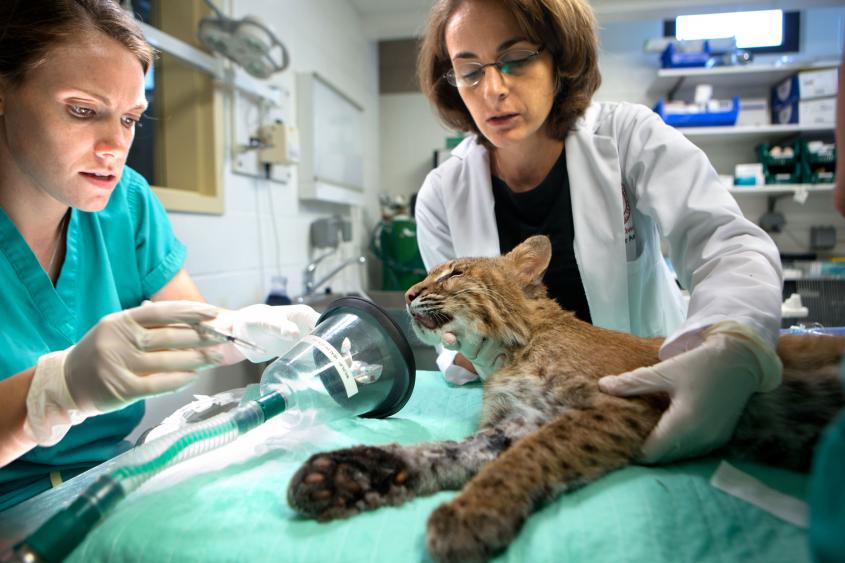 In April, Cornell University’s Janet L. Swanson Wildlife Health Center (WHC) admitted a young male bobcat after he was hit by a car in Lansing, N.Y.

After receiving a call from a witness to the accident, WHC wildlife veterinarians worked with officers from the New York State Department of Environmental Conservation and a nuisance wildlife control operator to capture and transport the bobcat to the WHC.

When he arrived, the bobcat was in critical condition and required several days of care to stabilize his

condition and allow bleeding in his lungs to resolve. He was also diagnosed with a severely fractured humerus (a bone in the forelimb) and a hip that had been moved far out of the joint.

Dr. Ursula Krotscheck, chief of small animal surgery at the Cornell University Hospital for Animals evaluated the bobcat and radiographs of his forelimb fracture. The bone was fragmented into numerous pieces, and she determined that a metal plate was necessary to bring together the pieces and give the bobcat the best chance of healing.

Donating her time, equipment, and expertise to the WHC, Krotcheck spent several hours performing the grueling procedure, challenged by anatomy that was different from her normal domestic patients, and by a fracture that was extremely difficulty to repair. After a few more days of recuperation, the bobcat underwent another surgical procedure by Krotscheck, in which his severely dislocated hip was addressed. WHC veterinarians continued to provide the bobcat with supportive care and aggressive pain control for the next several days, until the rehabilitation phase of his care could begin.

The bobcat was transferred to licensed wildlife rehabilitator Cindy Page, who owns the Page Wildlife Center in Manlius, N.Y. Page, who has decades of experience rehabilitating wildlife, housed the bobcat in a small area at first to restrict his activity and allow the bones to heal. He was given privacy but remained secretive, wary of humans and aggressive when approached. After approximately 10 weeks of rest and healing, he was returned to WHC for a checkup.

The results of the recheck radiographs were stunning: a beautifully healed fracture with perfect alignment. An exam showed good range of motion of the injured hip as well. He had grown, gained weight and was in excellent condition. As he recovered from anesthesia in a large dog crate, his release plans were solidified for the following day.

With assistance from Todd Bittner, director of natural areas for Cornell Botanic Gardens, a large nature area near his original home range was chosen. At noon on Friday, July 28, the door of his crate was opened, facing out onto a beautiful sunny meadow, while all of those involved in the bobcat’s care silently looked on.

Among the onlookers were many of the people that had been involved with the various stages of his recovery – a representation of the multitude of steps and stages that native wildlife such as this bobcat must go through when ill or injured between when they are found and when they are released. Despite the open door, the bobcat hunkered down toward the back of the carrier, apprehensive and unsure.

With some coaxing and gentle tipping of the carrier forward, he finally made a break for it – shooting out of the carrier like a bolt of lightning, across the meadow towards a large area of dense forest.

The Janet L. Swanson Wildlife Health Center is a nonprofit organization that provides state-of-the-art medical and surgical care for wildlife native to New York state with the goal of releasing them back to the wild. For additional information and to donate funds to support the Center’s work, please visit https://www2.vet.cornell.edu/hospitals/janet-l-swanson-wildlife-health-center/.