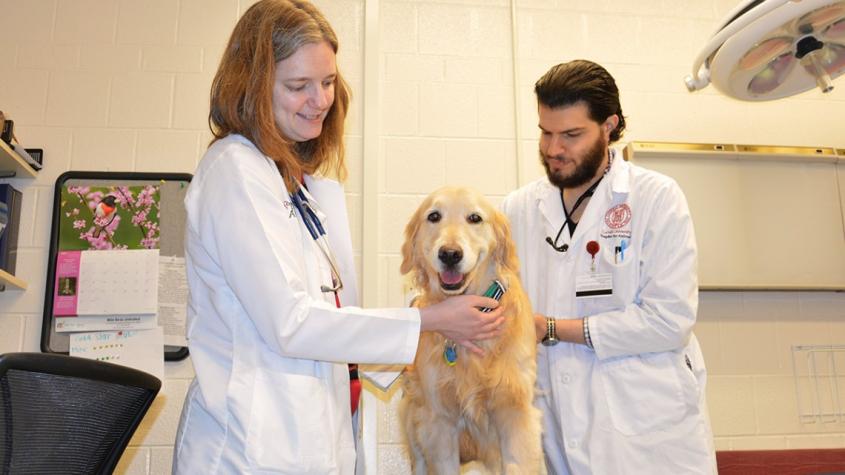 Dr. Kelly Hume, left, and Dr. Vincent Baldanza examine lymphoma patient Sophie in 2015. Data from samples taken from Sophie for the Cornell Veterinary Biobank will serve as historical controls for the current research.

New research to improve the effectiveness of promising new treatments using immunotherapies – a class of therapies that use the body’s immune system to fight cancer without nasty side effects – could prove mutually beneficial to both dogs and people.

Cornell and Tufts University scientists have received a five-year, $2.5 million grant from the National Institutes of Health to use dogs as a model for studying cancer immunotherapies. The grant also will more generally highlight the use of pet dogs as a model for studying human medicine, as they get many of the same diseases humans do. The dogs used in the study are treated with similar care as human patients, with the potential of being cured of lymphoma.

“I’m actually one of the few researchers who can say I help the model organism that I study, because the dogs will benefit from our research just like people will,” said Kristy Richards, associate professor of Biomedical Sciences at the College of Veterinary Medicine with a joint appointment at the Division of Hematology/Medical Oncology at Weill Cornell Medicine. Richards is co-principal investigator on the grant, along with Cheryl London, a research professor at Tufts University’s Cummings School of Veterinary Medicine.

Studying dogs for this type of research is somewhat unusual, but the practice has great potential for accelerating our ability to make important new treatments more effective in a wider variety of patients, Richards said.

Researchers have known that our immune system normally recognizes and clears out cancerous cells before they take hold. Recently, cancer researchers have found that tumors sometimes escape this surveillance by deploying natural brakes on the immune system, which they manipulate to shut down the body’s defenses. Researchers have since developed new therapies which could block this escape mechanism.

In 2015, an immunotherapy called a PD1 inhibitor was given to former President Jimmy Carter for metastatic melanoma that had spread to his brain, and he remains cancer-free today. PD1 inhibitors work by releasing the immune system’s brakes and blocking a tumor’s ability to hide from the body’s immune system, but they are only effective in about 20 percent of patients for most tumor types.

The grant will investigate whether combinations of PD1 inhibitors and other targeted therapies may increase effectiveness of cancer treatment in dogs, thereby setting up the possibility for human trials.

Immunotherapy combination clinical trials in humans will take decades to develop, because new drugs must be tested one at a time, and they first must be proven in people who are not cured with chemotherapy, before they can be tried with newly diagnosed patients. Dogs are rarely cured by chemotherapies used for people, “so trying new immunotherapies in newly diagnosed patients is a win-win situation,” potentially curing those dogs of their lymphomas while rapidly advancing research, Richards said.

For years mice have been the main animal model used for research on human diseases. Mice are easily manipulated, are grown cheaply in the lab, and their genetics can be engineered for investigating particular conditions. But they are also raised in germ-free environments and lack immune systems that have been exposed to a range of pathogens. Pet dogs, on the other hand, acquire the same diseases as humans and have intact, educated immune systems, making them ideal candidates for immunotherapy research.

“When we study how cancer therapies and treatments work in naturally occurring models like pet dogs, in addition to observing their effectiveness in targeting cancerous cells or shrinking tumors, we can also identify patient side effects that would likely not occur in a mouse model,” said London. “Over 50 percent of cancer drug trials fail in humans, so the ability to evaluate both the effectiveness and side effects in pet dogs prior to human trials can go a long way in preventing failure of human cancer trials.”

Clinical trials in dogs should begin in the next six months, at which time, the researchers will get word out to referring veterinarians for candidate canine patients with lymphoma.

Veterinary oncologists at the Cornell College of Veterinary Medicine and at Cornell University Veterinary Specialists in Stamford, Connecticut – including Angela McCleary-Wheeler, Kelly Hume, Cheryl Balkman, Lindsay Thalheim, and Margaret McEntee – will enroll and treat patients during the trials. Patients will also be enrolled at the Henry and Lois Foster Hospital for Small Animals located at Cummings Veterinary Medical Center at Tufts University in North Grafton, Massachusetts.

by Krishna Ramanujan
This article originally appeared on the Cornell Chronicle website.