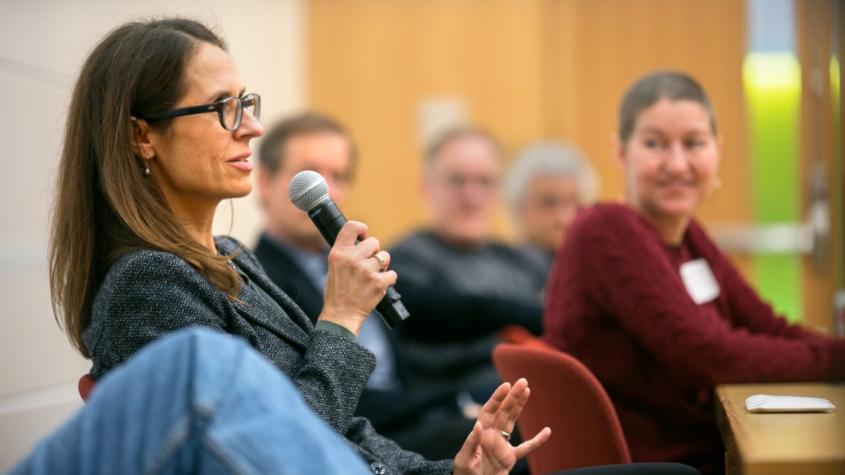 Nobel laureate Harold Varmus, the Lewis Thomas University Professor of Medicine and a member of the Sandra and Edward Meyer Cancer Center at Weill Cornell Medicine, moderated a town hall-style panel discussion on how cancer researchers at the two campuses could further collaborate, given the roughly 235 miles that separates the campuses.

Varmus noted that more cross-campus partnerships could create opportunities for novel science; increase productivity if faculty teamed up; and further increase the university’s reputation by aggregating strengths of each campus.

“We have to think about what kinds of things we can do to make the richness of the intellectual community … something we can interact with in a useful way, despite the distance that separates us,” Varmus said.

Panelist John Schimenti, professor of genetics and director of the Center for Vertebrate Genomics, proposed establishing a mechanism for faculty members at Weill Cornell Medicine to teach at the Ithaca campus, and vice versa.

Panelist Barry Sleckman, professor of pathology and laboratory medicine at Weill Cornell Medicine, commented on the “incredible breadth of research going on [in Ithaca]” in areas including evolutionary biology, nutrition, food science and communications, upon which Weill Cornell Medicine researchers could draw. A first step to strengthening research collaborations between the two campuses, he said, may be for each to take stock of its “intellectual assets” and to create a working group to connect researchers from different disciplines.

Lewis Cantley, Ph.D. ’75, the Meyer Director of the Meyer Cancer Center, said “technology that is being invented” at the Ithaca campus – such as Cornell dots, nanoparticles developed for cancer detection – are a strength of the upstate campus. Applying such technology at Weill Cornell Medicine is “where I see a lot of potential interactions,” Cantley said.

“I can see both worlds because I live in both worlds,” said panelist Kristy Richards, associate professor in the Department of Biomedical Sciences at the College of Veterinary Medicine and the Division of Hematology/Medical Oncology at Weill Cornell Medicine.

Cancer researchers in Ithaca are especially focused on integrating with Weill Cornell Medicine because that’s where clinical research on cancer patients is done, she said. “There’s an obvious need, if your research is going to be translated to the clinic, to collaborate [in New York],” Richards said.

Claudia Fischbach, associate professor of biomedical engineering and director of the Cornell Center on the Physics of Cancer Metabolism in partnership with Cantley, said she didn’t see the distance between Ithaca and New York as the major issue. At Harvard, as a postdoctoral researcher, she found there was little collaboration with Harvard Medical School located just across the river from the main campus in Cambridge. Donors helped create bridges between scientists at the two campuses by funding broad, interdisciplinary research efforts, she said.

“I think it is a combination of institutional commitment and personal relationships … and there needs to be some level of financial commitment from the institution that helps foster that,” Fischbach said.

“There is a lot of fundamental basic research [at Ithaca] that would be very complementary to the basic cancer research that’s going on at [Weill Cornell Medicine], and where [the Ithaca faculty] would benefit is having access to the clinical problems,” said Richard Cerione, the Goldwin Smith Professor of Pharmacology and Chemical Biology. “We need more of these meetings, they really do catalyze interactions that wouldn’t have happened otherwise.”

Discussions also covered how to facilitate graduate student interactions among labs in Ithaca and New York, and the possibility of expanding free bus service for students to make frequent campus-to-campus travel.

Fischbach and Cerione were symposium organizers, along with Robert Weiss, professor of molecular genetics.