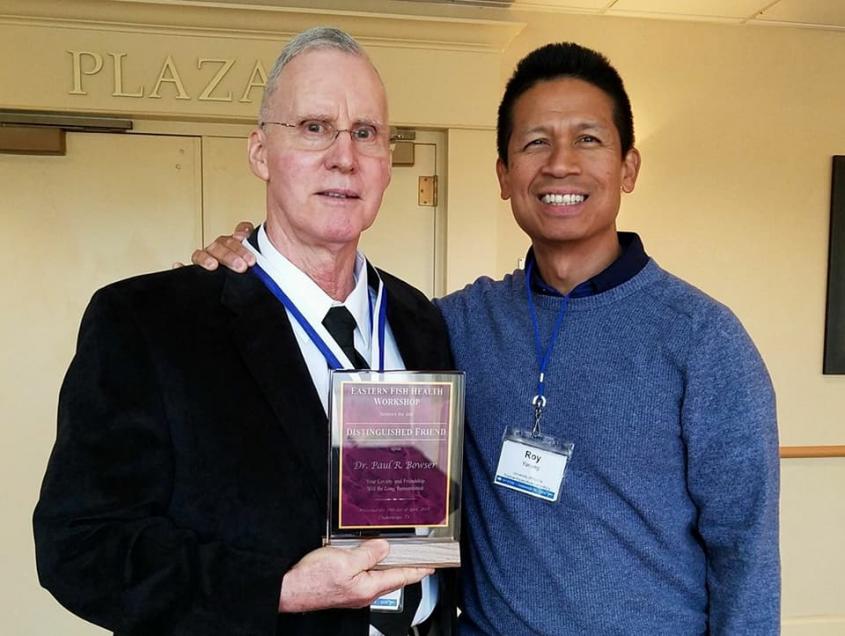 The Distinguished Friend awards are reserved for individuals with established careers of excellence in the fish health profession and who have been dedicated to serving the Eastern fish Health Workshop.

Because of the high standards that are expected of any honoree, the recognition is not necessarily an annual event and only one individual will be honored in any given year.  Bowser was the ninth individual to earn this distinction.

Bowser completed a bachelor’s degree in fisheries science at Cornell University in 1970, an M.S. in fisheries biology at Iowa State University biology, and a Ph.D. in fish health from Auburn University where he worked on the Channel Catfish Herpesvirus.  In 1985, Bowser joined the faculty of the College of Veterinary Medicine, where he served until his retirement in 2014 as a Professor Emeritus of Aquatic Animal Medicine. He taught courses in fish anatomy, histology and health management, and also taught in the AQUAVET Program for 30 years and served as associate director of that program for 25 years.

Bowser’s primary research interests include infectious and non-infectious diseases of fish, viral-induced tumors in fish and evaluation of new therapeutic compounds for treating diseases of fish. His laboratory was heavily involved in studies of the emergence of Viral Hemorrhagic Septicemia in a wide variety of fish species found in the Great Lakes Basin. His laboratory group also provided fish disease diagnostic services to aquaculturists and researchers.

Bowser wrote or co-authored over 210 peer-reviewed publications and was the principal investigator or co-PI on over $8 million in extramural grant funds. He also trained numerous graduate students, veterinary students, summer AQUAVET research students, and undergraduates in his laboratory.