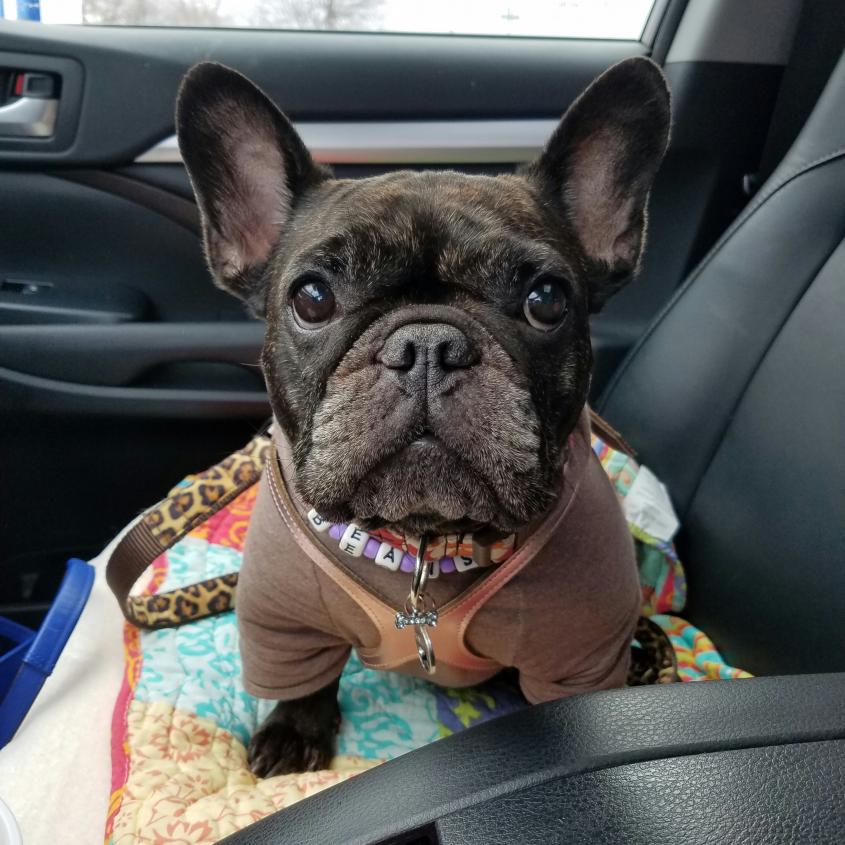 In March, Cindy Cousins brought her nine-year-old French bulldog, Beans, to her veterinarian for a routine dental cleaning. Concerned a growth on her lip could be malignant, her doctor excised it and sent it for biopsy. The results determined the lump to be melanoma, not uncommon in dogs but more often found in those who were light colored and more susceptible to sun exposure (Beans is brindle). Within weeks, Cousins noticed little, black lesions on Beans’ skin that were multiplying almost daily. Her veterinarian referred her to the oncology department at Cornell University’s Companion Animal Hospital. By the time they arrived at Cornell on April 4, there were 17 lesions total.

“It was scary thinking my poor girl had skin cancer,” says Cousins, noting she lost her dog Hazel to cancer a year earlier. “I was expecting the worst.”

She brought Beans to Cornell and requested she be seen by Lillie Davis DVM ’14, the third-year medical oncology resident who treated Hazel.

“The site of the original melanoma looked good, there was no scar and it appeared to be narrowly excised, and therefore not really

a cause for immediate concern,” says Davis. She explains removing the melanoma is usually curative. “It also would be very unusual for melanoma to start popping up all over her body the way she was developing lesions.”

Realizing it didn’t look like a classic melanoma and suspecting it was viral, she brought in Julia Miller DVM ’12, first-year dermatology resident, for a consultation.

“We also thought they looked more like pigmented viral plaques,” says Miller. She then biopsied three of the spots and shared the results with Jeanine Peters-Kennedy, assistant clinical professor of dermatology.

Miller explains, “Cornell is very unique and fortunate in that we have Dr. Peters-Kennedy who is double-boarded as a dermatopathologist. She’s truly one of the best people in the world to look at these cases because she knows how to put the clinical and dermatological pictures together for a diagnosis.” Peters-Kennedy confirmed papilloma virus was causing the pigmented viral plaques.

“I was surprised to find out they were all benign after finding the one on her face was melanoma,” says Cousins, noting she expected to be going through cancer treatments as she had with Hazel. “It was really good news, and we needed that.”

Canine papilloma virus is very prevalent and can manifest in many ways. Usually, younger dogs are exposed to the virus by the mother and their young immune systems are too weak to fight it off. They may then develop plaques in the mouth. Often, older dogs who develop papilloma have immune systems compromised by something such as Cushings Disease, oncology treatments, or a significant amount of steroids in their system.

“Knowing we didn’t suspect Cushings and she wasn’t being treated for cancer, I began to look for indications it was steroids. She had the classic thin muscles on top of her head and low skin collagen,” says Miller.

Looking at her records, Miller and Davis noted Beans was taking allergy medication, Temaril-P, twice daily. “People often forget that Temaril-P contains a corticosteroid as well as an antihistamine because there’s only a minimal amount of prednisolone in it. But for dogs who take high doses or are on the medication for an extended period, the steroid can begin to have an impact on the immune system,” explains Miller. Both the oncology and dermatology teams agreed the best treatment was simply to wean Beans off steroids in the hopes that the immune system counters the papilloma virus on its own.

“While surgical incision is usually the best way to remove the lesions, it wasn’t feasible in Beans’ case because there were so many,” Davis says.

After a month of weaning from the Temaril-P, Beans didn’t have any new growths and didn’t seem to be bothered by the existing papillomas.