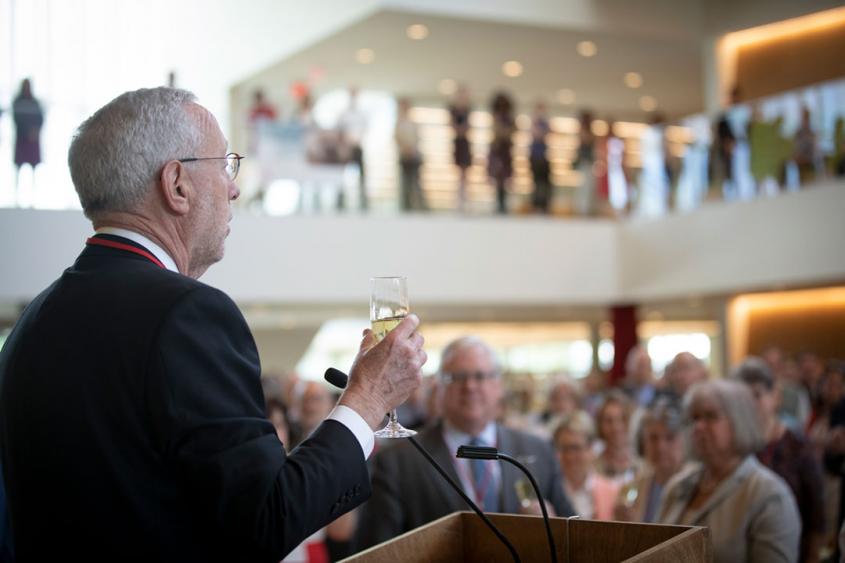 Provost Michael Kotlikoff speaking to the Board of Trustees in Takoda's Run, the new atrium in Schurman Hall. Photo by Jason Koski/University Photography.

After five years of construction, state officials and members of the university community commemorated the class expansion of the College of Veterinary Medicine with a celebratory ribbon-cutting ceremony outside of Schurman Hall June 8.

"These high-tech upgrades will transform the renowned college, improve the local economy and help strengthen New York's diverse academic opportunities," said Governor Andrew Cuomo. "The completion of this expansion project signifies a new era for the Cornell University College of Veterinary Medicine, as it continues to support the regional economy while helping the Southern Tier soar."

The class expansion complements the state of New York’s Southern Tier Soaring plan, the region’s blueprint to generate economic growth and community development. The state government has invested more than $4.6 billion in the region since 2012 to lay the groundwork for the plan. The $91.5 million Cornell project aimed to fulfill key goals for the college, including expanding its capacity to enroll more students, updating teaching spaces, improving navigation through the college’s many facilities as well as shaping a visual identity.

“This wonderful project will propel the students, faculty and staff in the College of Veterinary Medicine into the 21st century, and enable Cornell University to provide the best veterinary education in the world to even more students,” said Provost Michael Kotlikoff. Kotlikoff advocated for and planned the initial stages of the expansion during his tenure as dean of the college from 2007-15.

Working with the architectural firm Weiss/Manfredi of New York City, the college partnered with the state and private donors to fund the project. Completion of the class expansion will also support the needs of the New York State Veterinary Conference hosted by Cornell each year, which attracts nearly 1,000. The final stage of the project will finish this June with the opening of the Cornell Small Animal Community Practice, a 12,000-square-foot facility that will function as a full-service practice for cats and dogs, run primarily by Cornell DVM students. The new facilities have increased energy efficiency and are Leadership in Energy and Environmental Design certified.

“Through our outreach that ranges from rabies prevention efforts to healthy pet clinics, from invasive aquatic species tracking to shelter medicine consultations, from Buffalo to Brooklyn, our college works tirelessly to give back to the state that so generously supports our programs,” said Lorin Warnick, Ph.D. ’94, the Austin O. Hooey Dean of Veterinary Medicine.

“This project reaffirms the college’s position as a global leader as it fosters an innovative and collaborative research environment, while providing much-needed services to the local community,” said SUNY Chancellor Kristina Johnson. The College of Veterinary Medicine has been part of the state system since its founding in 1894.

“This transformative project will enable the school to advance research while offering cutting-edge curriculum for training future practitioners and researchers, leading to innovations in the fields of veterinary medicine and biomedical science,” said Howard Zemsky, Empire State Development president, CEO and commissioner.

Among the more notable renovated spaces is Takoda’s Run Atrium, a sprawling space inside Schurman Hall used for informal meetings, gatherings and open-concept study spots. The atrium is named for Takoda, a greyhound who belonged to friends of the college Janet and John Swanson. Another is Lefty’s Plaza, which expanded outdoor seating options and renovated the “front door” of the college. Named for golden retriever Lefty, the plaza was made possible by a gift from friends of the college Fred and Judy Wilpon.