College alumnae volunteer to help the next generation of Cornell women 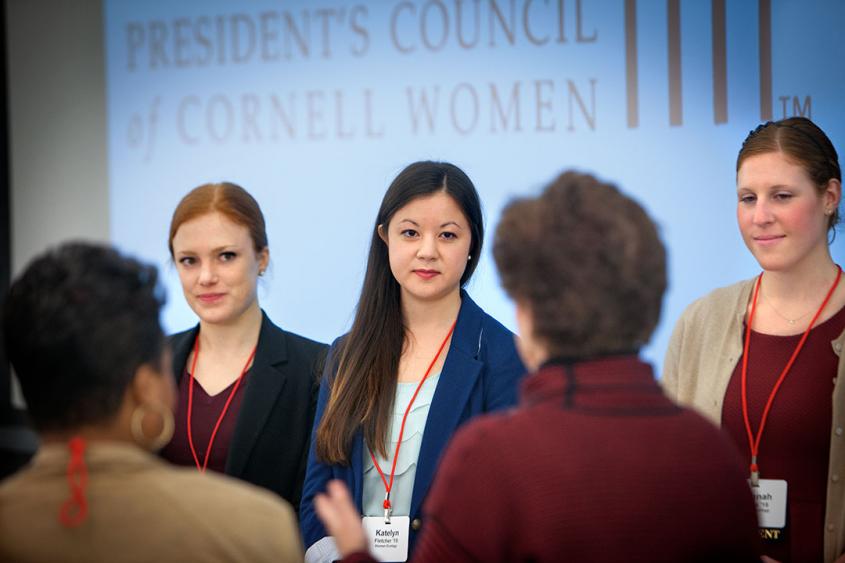 Cornell has long been a leader in the higher education of women. Fulfilling Ezra Cornell’s promise to “found an institution where any person can find instruction in any study,” in 1870 the university became one of the first among its peers to admit female students. In the same spirit, the College of Veterinary Medicine awarded a DVM degree to Florence Kimball in 1910, making her the first woman in the United States to earn such a title.

Nevertheless, the 1990 creation of the President’s Council of Cornell Women (PCCW) by then-President Frank H.T. Rhodes — at the suggestion of University trustees Lilyan Affinito ’53 and Patricia Carry Stewart ’50 — acknowledged the need and opportunity to do much more to strengthen women’s roles across the university. Since then, hundreds of Cornell alumnae have followed the call to further issues of importance to women at Cornell, engage accomplished alumnae by strengthening their ties to the university and each other, provide financial support to Cornell women and programs through grants and scholarships, develop leadership skills of Cornell women and serve as role models on numerous committees.

“The energy is contagious”

Currently, six highly accomplished alumnae of the College of Veterinary Medicine are among their ranks as members-at-large, in addition to three sustaining members. Approximately 60 alumnae per year are invited by Cornell’s president to join PCCW for a six-year term. Present members like Renee Bayha Gossett ’80, DVM ’86, an associate veterinarian at the Pound Ridge Veterinary Center near South Salem, N.Y., have helped newer members get acclimated and exposed to the breadth of opportunities to engage with alumnae, students and faculty. Among these newer members are Bayha Gossett’s classmates Lisa Freeman ’81, DVM ’86; Liz Dole ’82, DVM ’86; Mari Morimoto ’96, DVM ’01; Ellen Carlin DVM ’07; and Carol Gamez DVM ’91.

“I haven’t been a member that long but already I feel welcomed and excited to do more,” said Gamez, who owns the Georgetown Veterinary Hospital in Connecticut with partner Stanley Truffini, DVM ’78, and has a strong interest in exotic and avian medicine. “The energy is contagious. My first several meetings I was in awe at the organization and the leadership and openness of the group members. Everyone was so involved and respectful of each other.”

This community of dynamic women works throughout the year, coming together at meetings and an annual symposium. As many alumnae whose initial terms have expired remain involved as sustaining members, PCCW creates far-reaching and powerful networks within and outside the university.

For Freeman, the acting president of Northern Illinois University and a member of PCCW’s Faculty Engagement Committee, these connections have the potential to give a significant boost to women. “I believe that it is important for women to have mentors to support their success,” she said. “I understand that women may face implicit bias as they advance in their careers and that one important way to minimize the impacts is through sponsorship and through the advancement of women to leadership roles.”

Bayha Gossett has chosen to tackle this mission as a member of the Mentoring Committee, one of several on which she serves. She also sits on the Cornell University Council Administrative Board. On behalf of PCCW, she has helped to create a speaker series in conjunction with Cornell’s Graduate and Professional Women's Network (GPWomeN). Supported in part by a $10,000 PCCW Leadership Grant, the series brings five speakers to campus throughout the year to lecture on leadership topics to an audience primarily in the STEM fields.

Gamez, who calls Bayha Gossett her “PCCW buddy,” is focusing her efforts on individual mentoring, drawing on her own experience as a first-generation college student.

“Currently I have one mentee that I am excited to build a relationship with,” she explained. “As a young Mexican American woman, I wished I had someone to mentor me as I navigated my way through college and the unknown. I was very naive and could have used some good sound advice, so now I hope to motivate other young women to find their passion and go on to succeed in their fields of study.”

Inclusion and diversity are issues close to Morimoto’s heart as well. In fact, she sees her invitation to join PCCW as a reflection and continuation of her work in these areas. In addition to PCCW, Morimoto is helping to plan this year’s first ever All-Diversity Reunion at Cornell.

Liz Dole also brings a strong volunteer résumé to PCCW, having served multiple terms on the college’s Advisory Council and on the board of the Central New York Veterinary Medical Association. She continues the college’s tradition of alumnae lending their expertise to the university community through PCCW, inspiring future generations to get involved.

Perhaps it is a testament to the early accomplishments of such organizations as PCCW that Ellen Carlin, Senior Health and Policy Specialist at the non-profit EcoHealth Alliance and member of the PCCW Communications Committee, never felt disadvantaged by her gender. “I have been fortunate to have not felt for a second that there were any doors open to men that were not open to me,” she said. “But I recognize that is not true for everyone.” Through her PCCW work, for example, she learned that the all-women’s Cornell University Chorus is still seeking to achieve financial and experiential parity with the men’s Glee Club. “I’m happy to be a small part of helping them get there,” she said.

Carlin shares this desire to support the next generation of women with her fellow PCCW alumnae, all of whom are driven by a deep sense of gratitude. “Cornell changed my life,” Gamez said. “It was my building block, and I owe it to Cornell to give back.” Carlin echoed her sentiment: “Because so many people at Cornell helped create the scaffold that enabled my own career, I feel a total sense of obligation to do the same for today’s students,” she said.

In PCCW, Carlin has found an ideal avenue, one she recommends to all potential members. “It’s a great opportunity with no downsides,” she said. “You can give as much or as little time as your schedule allows for, and it’s a nice way to still feel connected to campus from far away.”

This story originally appeared in the spring issue of 'Scopes. Read the full issue here.