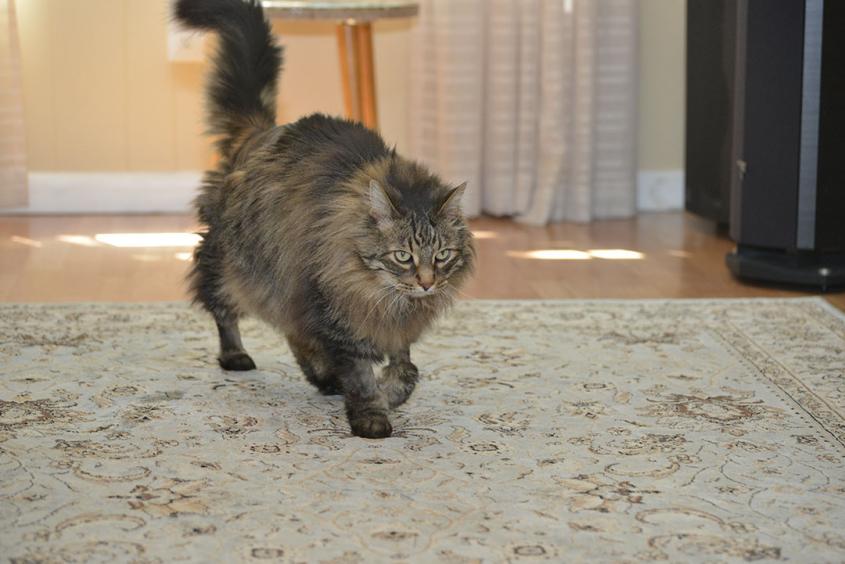 Upon examination, the orthopedics staff at the Cornell University Hospital for Animals determined there was a neurological delay on Logan's back right foot. Photo provided.

Thirteen-year-old Logan recently became the first cat in the United States to receive a surgical spinal technique developed in Europe, and most often used in medium- and large-breed dogs. The surgery was performed by Dr. Emma Davies, section chief of neurology at the Cornell University Hospital for Animals, and assisted by Dr. Baye Williamson, third-year neurosurgery resident at the hospital.

Logan’s journey to “first-ever” status all started with a limp.

His owner, Joe Long, noticed he was having trouble with stairs and made an appointment with Logan’s veterinarian. A course of anti-inflammatory medication seemed to help but upset his stomach, and he was still resisting putting weight on one hind leg. His back right side showed increasing weakness, particularly if he tried to climb or jump. When playing with a new kitten in the house proved too much for the cat, Long made an appointment with Cornell University Hospital for Animals to see if he had an orthopedic injury.

Upon examination, the orthopedics staff determined there was a neurological delay on the back right foot. They brought in the neurology team who recommended starting with spinal X-rays.

“It’s not uncommon for an animal to first see orthopedics when it won’t bear weight on a foot,” explains Williamson. “In looking at Logan’s X-rays, we saw his vertebrae didn’t line up. For this type of suspected chronic subluxation (or misalignment), where there’s no history of trauma, we first prescribe rest and restricted activity to see if it will resolve itself.”

Logan was prescribed a month of reduced activity and rest. When he returned, Williamson conducted another exam and found Logan had pain when touched in the lumbosacral (LS) area, where the left lumbar vertebrae attaches to the sacrum and pelvis. He also was unable to hold up his tail normally.

“This is a significant sign of expression for a cat so that’s unusual. Also, when we pet him on his back in front of his tail, he should arch his back or lift the tail and he didn’t,” she adds.

Given the decreased tail movement and persistent hind leg lameness, they performed an MRI of the lumbosacral region. This showed compression from two directions. The intervertebral disc at the lumbosacral space was partially bulging into the area from the bottom, and the ligaments were swollen on the top to cause compression there as well.

“In the LS area, a little compression usually is not a big deal because the nerve roots, and not the spinal cord, are housed there. There’s a little more space to begin with,” says Williamson. “In this case, though, it was obviously causing the animal discomfort.”

When a lumbosacral disease is diagnosed, the neurology team orders a flex-view MRI to help determine if the compression is dynamic – dependent on the position of the body. In flex position, the back legs are set forward, toward the head to see if the lumbosacral space opens up.

“Finding out if compression is relieved in flexion helps us decide how best to treat the animal,” says Williamson.

Logan had great decompression in flex position, so doctors recommended a procedure known as minimally invasive transilial vertebral (MTV) blocking. The procedure has a short post-op stay and a less restrictive recovery than dorsal laminectomy, a more common technique in which a portion of the vertebral bone is removed. Davies had already successfully performed the procedure on several dogs after being trained by the surgeon who innovated MTV blocking.

“Dr. Williamson explained the whole procedure, and the alternatives, very clearly," said Long. "Using a skeletal model, she showed me precisely what the bolt would look like and where it would go. Her explanation and obvious knowledge and care made me very comfortable with this option.”

Long scheduled the first available time for surgery. He explains, “I was away on business much of his life, until last June. I owe it to both of us to make the most of the time we have together. I want his remaining years to feel like he won the lottery and is a retired, do-nothing cat.”

This spring, Logan became the first cat to receive MTV blocking in the U.S.

Davies and Williamson placed Logan in the flex position and made two small incisions on either side of his pelvis. They used fluoroscopy, real-time imaging, to guide a pin through the pelvis and across the top part of the last lumbar vertebrae. The pin was fixed in place with the goal of constantly holding the LS space in the flex position. Just one stitch was used on each side of the pelvis. Positioning and surgery took roughly three hours as they made sure both Logan and the pin were in the perfect positions to hold the desired amount of decompression.

While relatively simple in concept, performing this surgery on a cat for the first time presented Davies and Williamson with some minor challenges due to his size. A surgical kit has been developed that contains everything a surgeon might need to perform this technique on a dog, including various sizes of pins. Williamson explains, “Logan was just one size too small for everything included in the kit, so we had to make our own.”

A CT was done after the surgery and radiology service created a 3D reconstruction of Logan’s pelvis. This will be a critical tool for making sure nothing has moved since the surgery, as the metal pin makes it impossible to take MRI scans in the future and the team will need to rely on X-rays and CT scans.

Logan was home the following day and Long was told he could gradually increase his activity after resting for about a week. He wore a simple baby onesie to keep him from grooming the two stitches for the first couple of weeks.

“Every day he seems to get a little bit better. He’s become a little bit mischievous, a little more excited about life,” says Long. “He’s purring all the time now and it’s just clear that he’s very happy and I’d even say grateful. He’s much more affectionate than he was before."