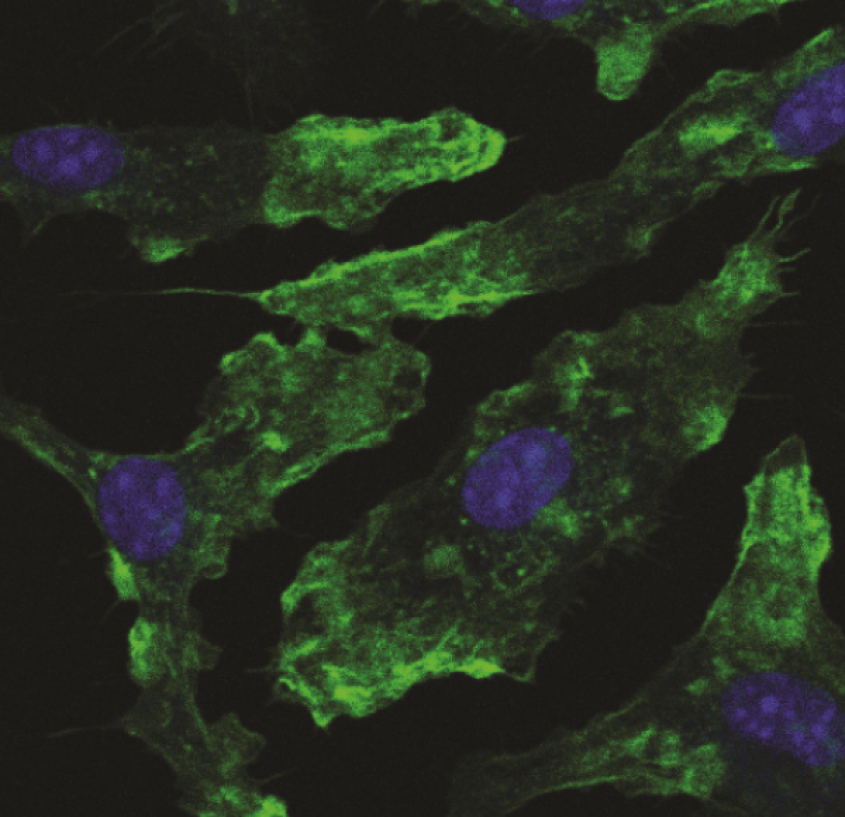 Researchers from the College of Veterinary Medicine have demonstrated that certain immune cell types are controlled by the physical mechanics of their surroundings. The study, published in the scientific journal International Immunology, outlines how scientists in the Leifer Lab used immunology and bioengineering approaches to arrive at their findings.

In a recently published study by the Leifer lab from the College of Veterinary Medicine in the scientific journal International Immunology, the group used immunology and bioengineering approaches to show that certain immune cell types are controlled by the physical mechanics of their surroundings. Much like we can detect heat and pressure, the researchers showed that macrophages also sense and adapt to their physical surroundings. Macrophages are critical for inflammation, both starting it to resist infection, and shutting it down to prevent chronic inflammatory diseases. To address this new area of biology, graduate student Erika Gruber, D.V.M. ’06 , took advantage of techniques in biomedical engineering to grow macrophages on finely tuned engineered surfaces that approximate human tissues from both normal and diseases states.

While science has long known that cells communicate via biochemical signaling, associate professor of immunology Cynthia Leifer, Ph.D. ’00, and her team were excited to explore how the physical properties of the environment or animal tissue itself can also regulate cell function. “Most of the existing work that has looked at macrophage function regulation has ignored the potential of the physical environment to affect cells of the immune system, and has focused on chemical signals,” says Gruber, who is first author on the study. “We kept those chemical signals constant and investigated the physical environment.”

Using bioengineered surfaces that model tissue stiffnesses ranging from soft to hard — such as fat and scar tissue —  Gruber and the group tested whether the stiffness of the environment that the macrophages were sensing would affect their inflammatory function. They found that those grown on the softest gels proved to be more pro-inflammatory, responding much more strongly to inflammatory stimuli, while those grown on stiffer surfaces — modeled after scar tissue — did not respond as strongly to the same stimulus.

This finding adds new layers of insight to macrophage behavior, and has implications for eventually developing new techniques to dampen inflammation when necessary, such as during an infection or in the case of autoimmunity.

“We’re starting to get a handle on some of the important molecular pathways that govern this response, which someday might offer a new area to explore for anti-inflammatory medications,” says Leifer. “It could also help us understand how we can change their function to benefit cancer therapeutics or to better treat atherosclerosis.”

When her Ph.D. program at the college concludes, Gruber will continue her research as a clinical pathologist at North Carolina State University’s College of Veterinary Medicine, where she plans to shift her focus from the human to the veterinary world. “There have been some small strides using immunotherapy in dogs,” she said, “but we don’t understand how dogs will respond, and I want to contribute to that effort.”