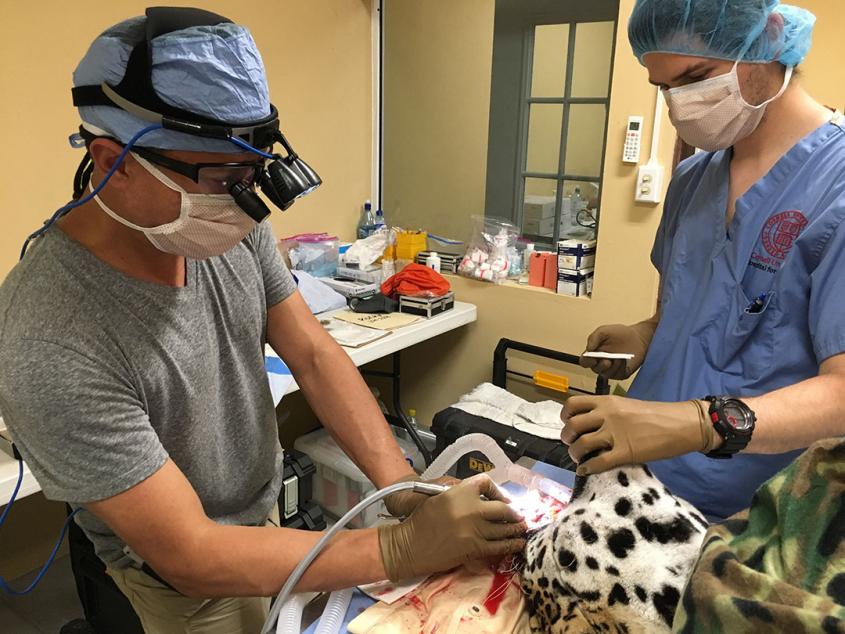 The wild residents of the Belize Zoo have a brand new veterinary clinic that will serve the medical needs of everyone from Sparks the tapir to Chiqui the jaguar. Members of the College of Veterinary Medicine celebrated this milestone with zoo staff when the clinic opened on site this summer. Since 2012, the college has made bi-annual visits to the Belize Zoo to collaborate on the clinical care of its residents.

“[We are] now poised to provide exemplary nutrition and veterinary services for our wildlife, as well as vital training and capacity building for both our zoo keeping staff, and local and international wildlife care partners,” said the zoo in a Facebook post about the opening. “We were thrilled to be able to highlight this wonderful partnership by honouring the driving force behind it: Dr. George Kollias Jr.”

Kollias, the Jay Hyman Professor of Wildlife Medicine emeritus, initiated the partnership between the college and the Belize Zoo in 2011. The zoo held the opening on the last day of their trip this summer, inviting local donors and special guests like the British ambassador. A plaque honoring Kollias was unveiled at the clinic.

Since 2012, trips led by Kollias and Drs. Santiago Peralta, Robin Gleed and Jordyn Boesch have included veterinary students as well as representatives from the sections of anesthesiology, zoological medicine and dentistry and oral surgery. In 2016, they earned a two-year grant from the John T. and Jane A. Wiederhold Foundation to support their efforts.

“This has been a very positive and productive relationship from a teaching, clinical research and personal perspective,” said Kollias. “The students and residents who have enrolled in and contributed to our course have had experiences that they would be unlikely to have anywhere else.”

“These trips to the Belize Zoo broaden the experience of Cornell veterinary students and specialists, and provide high-quality specialized medical services to the zoo animals,” said Peralta. Practitioners also collect medical and scientific information relevant to the conservation and welfare of endangered and non-endangered species that are indigenous to Central America.

The college’s latest trip to the zoo this summer coincided with the new clinic’s opening.­ The facilities available to the Belize Zoo beforehand included a more basic clinic and a zoo lodge that accommodated groups of students, researchers and visitors.

“The development of the clinic was key to the continued overall advancement of the animal health program at the zoo by virtue of improved diagnostic and treatment options for the animals there and for similar indigenous species brought in by the public or Belizean wildlife and forestry agencies,” said Kollias.

The zoo is currently home to over 175 animals, representing more than 45 native species. It opened in 1983 as part of an effort to provide a home for wild animals used in the making of documentary films about tropical forests. They now keep animals which were orphaned, rescued or born at the zoo, in addition to rehabilitated animals and those sent to the zoo as donations from other zoological institutions. Over 86,000 people visit each year.

“Everyone wins in this collaboration and it has been a wonderful partnership,” said Peralta. “Despite the challenging conditions that exist by virtue of being in the middle of the jungle, together we’re able to maintain the highest standards of veterinary care.”

“Every time our teams visit the zoo, both the zoo staff and Cornell team members learn something new that can benefit the animals,” said Kollias. “We look forward to continuing our great working and teaching relationship with the zoo, and continue to help make improvements and contributions to the great care the animals already receive.”