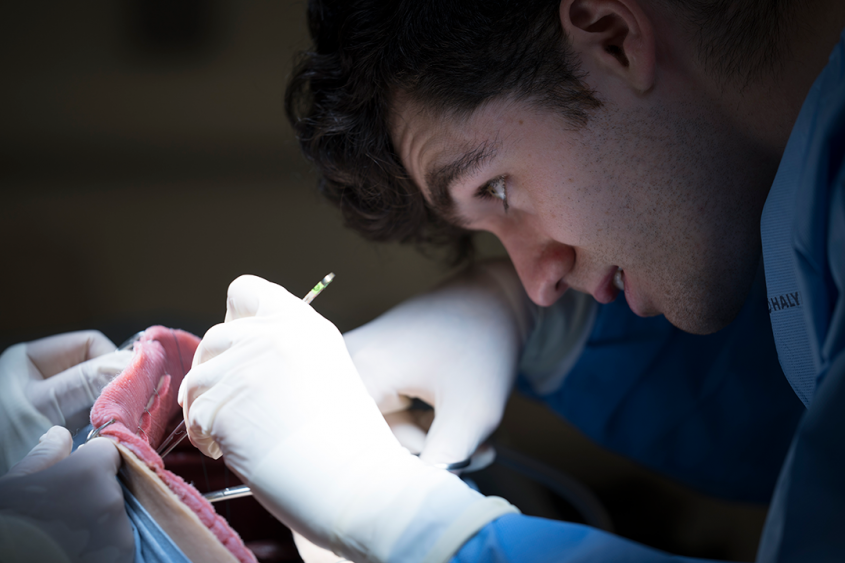 The synthetic cadavers are made of water, fiber and salt, and allow veterinary students to practice basic procedures at key points in the curriculum. Photo by the College of Veterinary Medicine.

That creature on the surgical table isn’t Frankenstein’s monster, but with its realistic tissue and organs, it comes close. The College of Veterinary Medicine has introduced state-of-the-art artificial canine cadavers on which veterinary students can practice their budding surgical skills. The synthetic cadavers mimic living tissue, with individual muscles, bones and organs. They even bleed and breathe like a living canine patient.

“Surgery is very much a hands-on skill,” said Dr. Galina Hayes, assistant professor in the Department of Clinical Sciences. “The SynDaver units create a learning environment where surgical procedures can be effectively taught and practiced while minimizing the risk of exposing live patients to the errors a novice surgeon may commit.”

The models are made from water, fiber and salt, and incisions in the outer layer can be patched. The college purchased two abdominal models and one full-sized canine unit from SynDaver Labs this summer. The internal organs must be replaced after several procedures, but have been key this fall during the small animal soft tissue surgery clinical rotation of fourth-year veterinary students. The students practice situations like intestinal obstructions and hemorrhaging vessels under the supervision of boarded specialist small animal surgeons.

“Studying from a book, you can know all the steps by heart, but it’s not actually the same as handling the tissues and performing the procedures,” said Mark Massaro, a fourth-year student at the college who recently worked with the lifelike units.

The students also get plenty of hands-on access to the models given how the rotations are structured. “We have a maximum of six students on their rotation at any one time, so there are never more than two working with a single unit,” said Hayes.

Cornell veterinary students begin training for surgery by learning anatomy in their first year on preserved cadavers. In their third year, students begin clinical rotations and learn basic procedures like spaying and neutering under the guidance of veterinarians at the Cornell University Hospital for Animals.

Since the SynDavers are made from materials that mimic the tissue and other properties of live animals, the models will help students transition from cadavers to live patients more seamlessly and with more surgeries under their belt.

“Practice on the models is incorporated into their clinical rotations to minimize the time interval between when students are taught important skill sets and when they watch expert surgeons implementing them,” said Hayes. “Several students who completed their rotations before we acquired the models are making special arrangements to return just for this lab because they see how valuable it is.”

“I’ve never used a model that was so realistic,” said Massaro. “We went through each procedure step-by-step, from handling the tissues, making the incisions, putting in sutures and mimicking what would actually be done during surgery.”

Massaro recalled performing a gastropexy on a SynDaver unit in the morning, only to find later that day there was an actual canine patient at the hospital that needed the procedure. “I could tell how applicable the practice was. I knew how to hold my hands and position the stomach – all of that is so valuable.”

While the models are expensive – ranging from $17,000 to $32,000 apiece – they are worth the investment, said Hayes, as feedback tracking student confidence in performing a surgery unassisted has risen across the board. “Students leave their rotation having mastered fundamental surgical skills that will serve them well throughout their careers.”