Medicine without borders: Cornell cardiologists travel the world to improve treatment at home and abroad 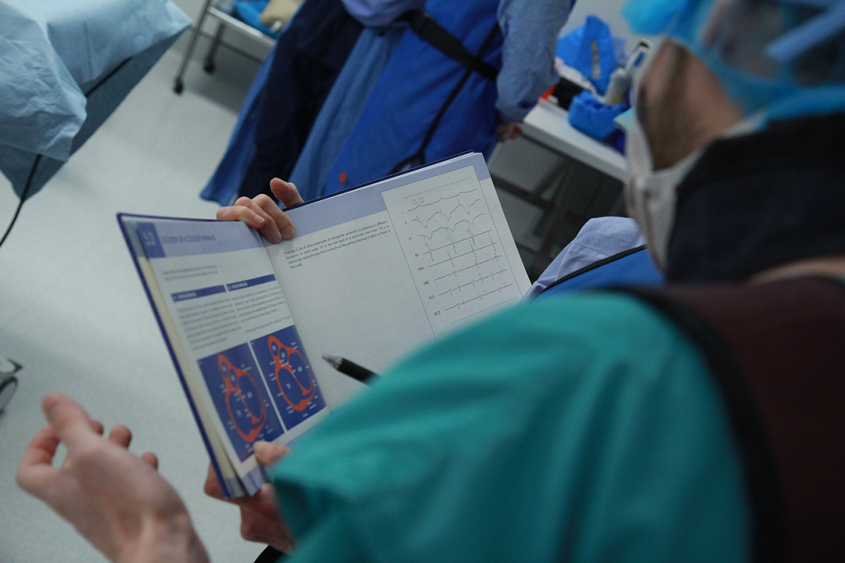 The ability to detect and understand arrhythmias, or abnormal heartbeats, is far from simple. Every disease is not the same, and some threaten animals’ lives.

During years of working together to treat conditions from heart failure to congenital heart defects and arrhythmias, a team of cardiologists at Cornell has been perfecting the art of collaboration on campus. Now they’re forming meaningful relationships around the globe — to save lives near and far.

The ability to detect and understand arrhythmias, or abnormal heartbeats, is far from simple. Every disease is not the same, explained Moïse, and some threaten animals’ lives.

“Each of us has come from a different aspect of arrhythmia study, so we’re each like a piece of a puzzle,” she said. “We bring our complementary talents to training residents, teaching and writing manuscripts. After a recent trip to Russia, however, I realized that our way of working together is not just a local phenomenon. Veterinarians understand one another across borders. No matter what the political situation, we’re all working toward a common goal and want to help each other.”

It takes a team

Moïse has expertise in long-term monitoring of arrhythmias. Santilli is a leader in the techniques of clinical electrophysiology and ablation, a procedure to scar or destroy tissue in the heart that's allowing incorrect electrical signals to cause an abnormal heart rhythm. Pariaut focuses on the diagnosis and treatment of arrhythmias. And Kornreich has a strong background in benchtop research and understands the complex electrophysiologic mechanisms at the cellular level.

Together, they developed a clinical cardiac electrophysiology lab at Cornell to treat arrhythmias medically and with a minimally invasive procedure known as ablation.

“It’s a very rewarding technique,” Pariaut said, “because it can completely correct a congenital cardiac defect in a young animal. Dogs born with an abnormal muscle bundle of the heart can experience heart rates as high as 300 beats per minute, causing weakness and poor body condition. After the ablation which in total may take several hours due to the complexity of the procedure, they can be back to normal, behaving like any healthy puppy the very next day.”

On a typical day, Moïse, Santilli, Pariaut and Kornreich not only see patients and consult with one another on cases but also network with veterinarians all over the world through receiving and sending electrocardiograms.

Clinical medicine is driven by clinical practice, yet it also relies heavily on investigations that yield sound evidence-based results, Moïse explained. Working across borders helps veterinarians get better at treating patients because the money and resources available in veterinary medicine don’t compare to those of human medicine. Therefore, veterinarians often rely on sharing information with colleagues who have conducted a series of cases.

Thanks to the long-standing reputation of the cardiology team at Cornell and a recently published textbook coauthored by Santilli, Moïse and Pariaut entitled "Electrocardiography of the Dog and Cat: Diagnosis of Arrhythmias," the cardiologists are often invited to speak all over the world.

“Each place I’ve gone, there’s always someone who is so driven that they travel to different veterinary schools to learn. Many come to Cornell and take what they learn back home,” Moïse said. “We take note of these ‘drivers’ so that we can collaborate on studies. By pooling our research, we can treat so many more animals than we could by ourselves.”

One such driver is Dr. Maria Nazarova. After hearing a lecture by Santilli at a the Italian Companion Animal Veterinary Association conference in Milan in 2014, Nazarova invited him to Russia to teach her and her colleagues. Two years later, she traveled to his cardiology department in Clinica Veterinaria Malpensa in Italy and then to Cornell to study with Moïse in 2018.

“That’s how my new life began,” said Nazarova. “I learned that we can't only use and trust our devices and forget about our clinician decisions. Now I always underline the value of the clinical exam to my students, asking, ‘Did you notice anything unusual? Murmurs or pulse abnormality, rhythm, etcetera?’ Visiting Cornell was like going back to basics while also having an eye toward future possibilities.”

From personal connections to global impact

While Nazarova visited Cornell, she was also suffering the adverse side effects of a rabies vaccine, and Moïse stepped in to take care of her. As a gesture of gratitude, Nazarova’s family invited Moïse and Santilli for dinner when they traveled to Russia for a conference.

“Getting to know veterinarians like Maria on a personal level gives me important perspectives on other cultures that I can’t get from watching the news, and I think it goes both ways,” Moïse said.

And the meaningful connection they shared has led to further collaboration. Impressed by Moïse’s expertise as well as her friendship, Nazarova interviewed her about both her approach to her work and her personal life. After learning that Moïse’s relationship with her childhood horse was what inspired her to pursue veterinary medicine, Nazarova offered Moïse a special parting gift — a drawing that she had made of a horse many years earlier, which happened to look just like the horse from Moïse’s childhood. Nazarova ultimately translated the interview into Russian and published it in Vet Pharma magazine this year.

Together with her sister Tanya, Nazarova is also translating "Electrocardiography of the Dog and Cat" into Russian. Initially published in Italian, the authors converted the book to English while expanding and updating the new version. The book gives both clinical and theoretical information to interpret simple complex electrocardiograms in dogs and cats, and is meant to be used by both veterinary students and general practitioners, as well as cardiology residents and specialists.

In addition to Russian, the book will be translated into several languages, including Italian, Portuguese, Spanish, Korean, Chinese and French, Santilli explained. And he expects it to reach 7,000 to 8,000 veterinarians in its first year. “I’m thrilled that it will reach so many vets because it has completely changed how they can read electrocardiograms—to help them both make the right diagnoses and prescribe the right treatments.”

Because a dog’s love tends to be stronger than any pain it is feeling, a sick dog will push through discomfort, even if it’s life-threatening, explained Moïse. So veterinarians cannot rely on symptoms, which are expressed, but rather on clinical signs. They have to be able to detect abnormal heart rhythms, as well as determine the type of arrhythmia and how serious it is.

“If you stay in your center doing what you think is the best, you might do very well,” Santilli said, “but people around the world can help you grow. I believe that sharing knowledge internationally is the future of veterinary medicine.”