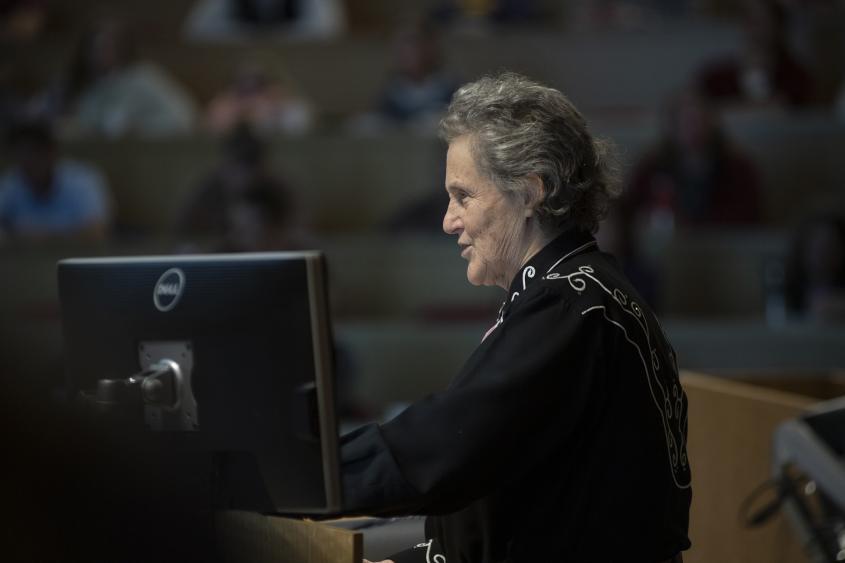 Dr. Temple Grandin, the prominent author on autism and animal behavior, visited Cornell on November 13 to share her unique perspective on animal behavior and livestock husbandry and to meet with students, faculty and other members of the Cornell community. Her visit was organized by student members of the American Association of Bovine Practitioners (AABP) club and supported by the Cornell Dairy Center of Excellence.

According to organizers and third-year students Olivia Cox and Amber Forrestal, bringing the world-renowned animal behaviorist to Cornell felt far-fetched at first. As members of the Cornell AABP club, they wanted to invite speakers that have made a real impact on the cattle industry. “After letting the idea percolate for a few days, we decided that there could be no harm in reaching out to her,” said Cox. “We were both delighted and shocked to get such an enthusiastic response from Temple.”

Grandin, a professor of animal science at Colorado State University, has made the Time 100 list of the people who most affect our world, and is the subject of an Emmy Award-winning HBO film. More than half the cattle in North America are raised and processed in systems designed by Grandin. “Temple has revolutionized animal welfare, particularly the production animal industry,” said Forrestal. “She reminds all of us that animals are highly emotional, sensitive beings and that understanding their behavior can help us better serve them as veterinarians.”

Grandin’s visit included a tour and a dinner at the Cornell Teaching Dairy Barn (TDB) where she shared her observations of the operation. “She was so impressed by the comfort level of our 'ladies' that she took her phone out mid-tour and exclaimed, ‘Now THAT'S a comfy cow!’ while snapping a photo,” Cox recounts. “She later told us that she planned to use the photo as an example of a happy cow in her work.”

Grandin was also able to help troubleshoot some areas. “We asked her to look at a few places in the barn where cows tend to get nervous, and she made some recommendations for improving footing to limit slipping thereby keeping the cows calm,” said TDB Director Blake Nguyen, D.V.M. ’12.

Grandin gave two lectures — the first, on bovine stockmanship, and the second, on animal behavior and autism — both to a packed lecture hall, where Grandin drew laughter from the crowd on many occasions with her unvarnished opinions and observations.

On cattle husbandry: “Good stockmanship requires time and a lot of people aren’t willing to spend the time. … You can go buy a fancy new milking parlor, but it’s not going to work without good management.”

On dogs and their need for human interaction: “What would I rather have, chain link fences with a great volunteer program, or a fancy dancy [facility] with no volunteers to play with the dog? I’ll take the one with the chain link fence and the volunteers.”

Grandin’s viewpoints come from experience — animals think in pictures — just as she does. This alignment in thinking allowed Grandin to revolutionize animal welfare, particularly in the cattle industry, where her insights have led to more humane and comfortable facility designs. She continues to use her image-based thinking to improve facilities – pointing out the errant hanging chain or flapping paper towel that causes cattle to balk or freeze. “I want to stress the importance of being a good observer when working with animals,” said Grandin. “It doesn’t matter if you’re working with livestock or dogs and cats.”

Grandin credits her power of observation to her autism – noting how this condition should be used and viewed as a strength as opposed to a disability. “Einstein probably had autism. Same with Steve Jobs and Edison,” she said. “The same genes that make people have a big brain are the same genes that cause autism…so you can’t get rid of it. It’s embedded. If we did get rid of it, we’d probably still be living in caves.”

Grandin’s message on leveraging one’s unique strengths struck home for Forrestal, who noted, “We hope that her attitude of embracing the parts of herself that make her unique is an encouragement to anyone who feels held back by their differences.”