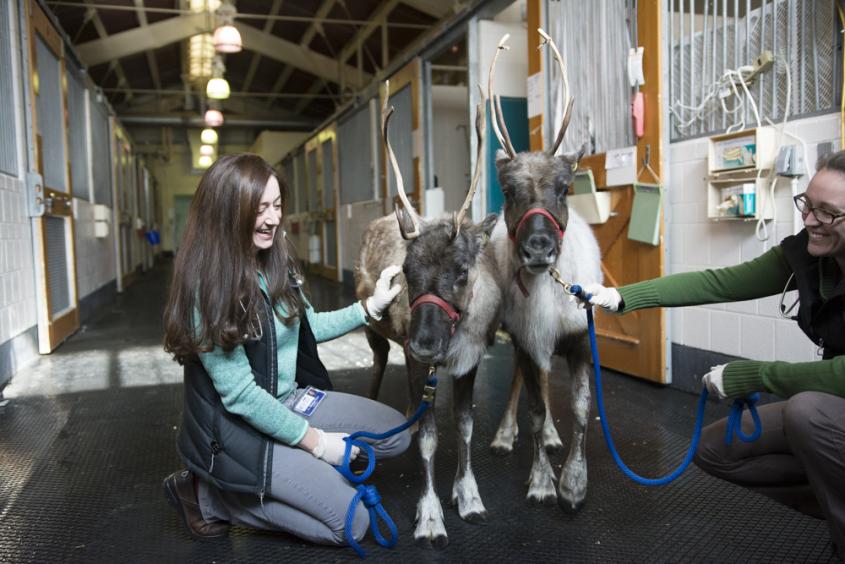 Little Buddy and Moose at Cornell last year. “The two boys are doing amazingly well,” said owner Mike Schaertl. “They’re both healthy and enjoying the cool weather.” Photo by the College of Veterinary Medicine. All others provided.

A year after a devastating illness brought reindeer Little Buddy to the Cornell University Equine and Nemo Farm Animal Hospital, the young reindeer is now back to full health and already embracing the holiday season.

In November 2017, Little Buddy was diagnosed with Babesiosis, a potentially fatal parasitic disease spread by ticks. His brother Moose traveled with him to Cornell, where Moose provided blood for a transfusion that saved Little Buddy’s life, and offered companionship to his brother who was stressed without him.

Little Buddy and Moose are living happily with their herd in Shortsville, New York, approximately 30 miles outside of Rochester. Now a robust 220 pounds, Little Buddy’s original diagnosis made him lethargic and uninterested in food. After treatment in November of 2017 by resident Melissa Fenn, D.V.M. ’15, Little Buddy could stand and began to eat again. He recovered just in time for the holidays.

“Babesiosis is oftentimes fatal and Little Buddy came to us very sick. We are glad to see that he has recovered so well after his time at Cornell,” said Fenn.

Little Buddy has been busy this season now that he’s back to full health. He welcomed Santa to a Shortsville community park and helped sell wreaths for the Boy Scouts earlier this December. He has also been working for the PTSA by collecting donations to feed the needy. “We open up our property every Sunday between November 25 and Christmas,” said Schaertl. “Hundreds of kids and parents and grandparents have visited to see Little Buddy and Moose and Little Brother, who we got in May, and they leave donations in Little Buddy’s barn.”

Little Buddy also added theater to his extracurricular activities this season. Both he and Moose will get a cameo in the Manchester-Shortsville Central School District’s performance of the musical White Christmas.

“Little Buddy wouldn’t be here if it weren’t for Cornell,” said Schaertl. “We’re so glad he’s back to full health again.”