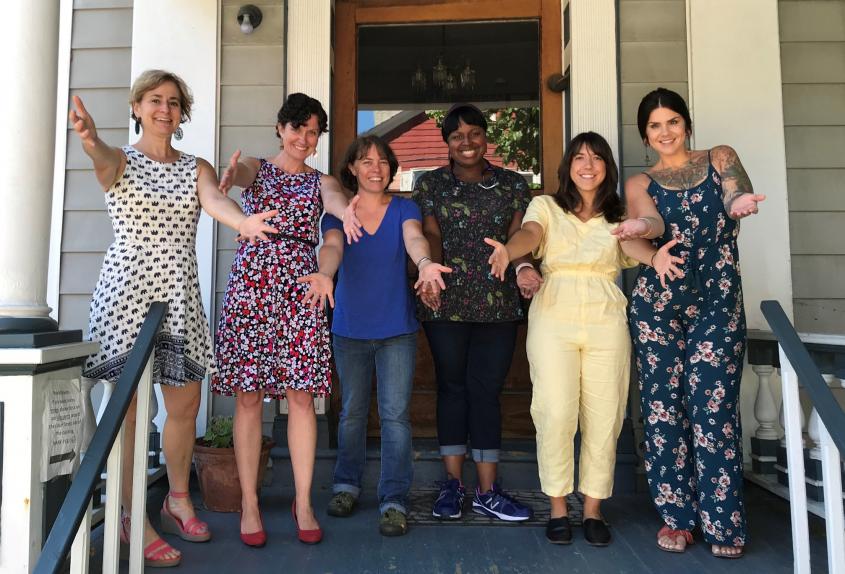 Members of the REACH project, a health clinic that serves all individuals in the Southern Tier region of New York state, including those who typically face stigma in the healthcare setting, without regard for their ability to pay for services.

When Tatiana Thomas wasn’t busy completing her M.B.A. degree or earning a graduate certificate in epidemiology, she was following her passion for human wellness by teaching yoga. But the practice came with a sobering realization.

“I wanted everyone to have access to yoga’s many health benefits, but in my community a lot of people couldn’t afford to hire an instructor for $45 to $60 per hour,” said the first-year student in the Master of Public Health program from Springfield, Ill. “Seeing that disparity among the type of people I wanted to help and those I was able to help — it was jarring.”

In fall 2018, Thomas entered Cornell’s Master of Public Health (M.P.H.) program because she wanted to contribute to increasing equity in the national healthcare system. Now she’s interning with the REACH Project, a health clinic that serves all individuals in the Southern Tier region of New York state, including those who typically face stigma in the healthcare setting, without regard for their ability to pay for services.

The REACH Project opened its doors in Ithaca, NY in February 2018 in response to the current opioid crisis, which claimed 72,000 lives in the United States in 2017, (a 10 percent increase from the previous year) as well as to threats of dismantling the Affordable Care Act.

In addition to the organization’s commitment to offering evidence-based treatment for patients with opioid use disorders, they also provide primary care treatment as well as treatment for behavioral health, Hepatitis C and HIV. As a low-threshold care provider, they promise to treat all patients with compassion and without stigma.

“It’s a chance to do medicine the way we think it should be done,” said Dr. Elizabeth Ryan, the physician who runs REACH’s primary care department. “We believe that you should not get kicked out of your practice for being 40 minutes late because you were at a custody hearing for your child, or your car wasn’t working, or you had to be at your job or you would lose it. It should not take much for you to be able to get very good care at REACH.”

With Thomas’s interests in substance use and mental health issues as well as an academic focus on outcomes research and health economics, she finds REACH to be a perfect fit for hands-on learning. Currently, she is helping them get organized by reconciling data and pulling reports. In the longer term, she hopes to gain the skills to analyze data and produce reports that help people understand what is being gained from the services rendered. This sort of reporting is crucial for an organization that relies on funding from external sources, outside of their patients and the medical insurance industry.

“There are so many things that people need in order to make themselves healthy and put themselves at an equal station in life, and I realized I wanted to be more on the systematic end of that rather than the service delivery end,” Thomas said.

Due to the relatively intimate scale of REACH, she can see the impact she’s having not only on the organization and the patients, but also on the community that is safer and healthier thanks to their efforts.

In one afternoon, Ryan treated a young professional who had just lost her job, a former prisoner and violent offender who had never learned that his anxiety was treatable, and a couple who travels an hour every three weeks to visit the clinic. The woman, who’s suffered multiple traumas over her life, including abuse and loss of loved ones, cries in gratitude during every appointment, Ryan explained. And her boyfriend, also a patient at REACH, is recently out of prison and running his first successful online business.

Since opening in February, REACH has treated about 700 unique patients from 22 counties in approximately 3,500 visits, and they have a waiting list that is limited only by space and money.

“Part of why it’s working is because we offer other things that aren’t medicine,” Ryan said. “In the waiting room there’s a big shelf full of donated food, drawers of toiletries and a never-ending supply of donated coats, sleeping bags and shoes. We also host a free veterinary clinic for homeless pets every month (Street Dogs) and help patients with housing, insurance and rehabilitation needs.”

She explained that in the process of inventing a model based on diminishing shame and stigma, and forging a somewhat new path, it makes a real difference to have Thomas’s eyes on the organization, ensuring that their goals are being met.

For Thomas’s part, she’s thrilled to deliver. “I want to go for a Ph.D. eventually,” she said. “But, I want to keep getting this type of experience so that I can better identify what is needed to make healthcare a system that works for everyone and how I can contribute to creating that.”

Next semester M.P.H. student Christina Hanna will join Thomas as an intern at the REACH Project.