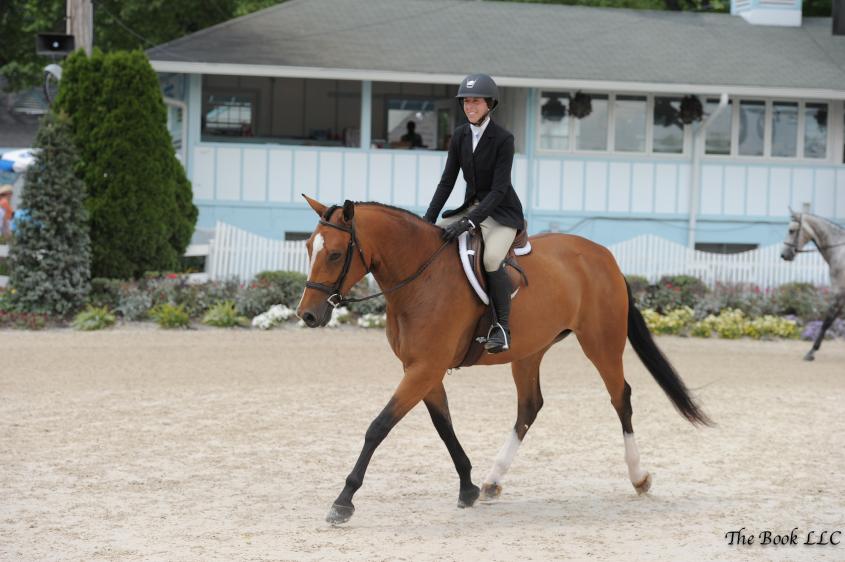 Blue, an eight-year old Hanovarian mare, suddenly went blind one night. “In the morning, she was found just staring straight ahead and not moving in the middle of the paddock,” explains her owner Kelly Ross. “It was hard to get her to walk inside because she was timid and kept bumping into things. Once we got her safely in the barn, we called her veterinarian who examined her and confirmed she was blind in both eyes.” Blue was treated with steroids and the vision was restored, but she again lost sight in her left eye when she was weaned off the medication.

After a two-week stay at an emergency facility where it was suspected she had a tumor, she was brought to the Cornell University Equine Hospital for diagnostic imaging and treatment.

“We suspected a compressive mass, but needed imaging to confirm, as well as to help us plan a surgical approach,” explains Dr. Elaine Flory Claffey, clinical instructor in the Section of Large Animal Surgery.

On skull computed tomography (CT) scan, a mass was seen in the sphenopalatine sinus as suspected. It appeared to be mostly right-sided and compressing the optic nerve. It was thought to most likely be an ethmoid hematoma, neoplasm or sinus cyst. Sinusotomy and surgical removal of the mass were decided on as the best measure to prevent loss of vision in the right eye, but the location of the mass posed some particular challenges.

The sphenopalatine sinus is a tiny sinus located under the brain cavity. There also are significantly large vessels on either side of the sinus. “This particular sinus is so far back in the skull it is very difficult to access surgically,” says Claffey, noting they have performed procedures to remove masses from the sinuses, but “It is relatively new for us to access the sphenopalatine sinus in this way.”

“My biggest concern was not to put Blue through too much," says Ross. "There were times when I was about ready to give up, but the veterinarians at Cornell were so confident and positive about the approach that I felt comfortable moving forward." Ross adds she often had her mother (Blue’s co-owner) speak with the veterinarians about the specifics of the surgery and its risks because she is a nurse. “They were great about explaining everything and keeping us as completely up-to-date as possible so we could make the best decisions for Blue.”

With Dr. Norm Ducharme, the James Law Professor of Surgery, as the lead surgeon, a unique standing surgical procedure was performed during which a sinus flap was opened and an endoscope was passed through the nostrils into the sinuses for visualization. The first time Blue went into surgery, visibility became too difficult to continue with the procedure. After a few days of healing, surgeons went in a second time and found the pathway still accessible and with improved visibility.

A variety of long instruments and a flexible camera were used. “We needed the imaging team and their knowledge of anatomy to assist with this complicated procedure. It was quite a long pathway to travel through before we got to the actual sinus,” Claffey says. “Since instruments are visible on X-ray, this form of imaging was used to make sure they were placed where they should be and that we were moving in the right direction.”

Due to the methodical and cautious nature of the procedure, it took a few hours to gain surgical access to the sinus. The mass was removed and was suspected to be a sinus cyst.

It’s not likely that Blue’s vision will return in the left eye, but it is hoped the removal will decrease the risk of progression of symptoms.

“The cyst had compressed part of the brain cavity so, depending on where it continued to place pressure, we were concerned we could see nerve problems,” says Claffey. “There have been a few other horses that have had masses removed from this area, but this was the first time the mass was creating compression and had an expansive, destructive quality.”

Ross says Blue has since returned to her usual self both in personality and in what it’s like to ride her. She even jumped again for the first time shortly after the new year.

Claffey attributes much of the success to Ross. “She was a great member of our team. She knows her horse really well and it was important that she trusted us and we communicated well, especially since she couldn’t always be on-site. It was very gratifying. We were fortunate to have wonderful referring veterinarians as well as our imaging, internal medicine, anesthesia and surgery departments all collaborating to help create a good outcome for a special horse and owner.”