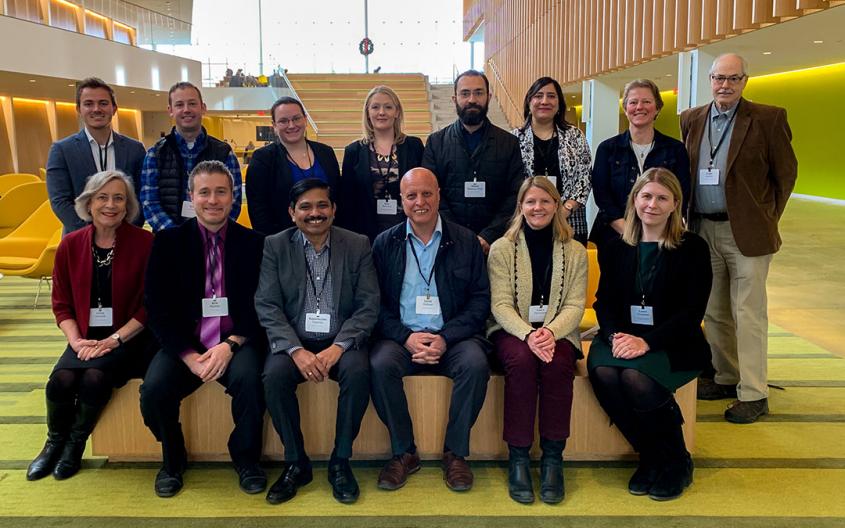 Researchers and clinicians gathered to explore translational research opportunities and potential collaborations on a major issue that threatens both humans and animals in our region: Lyme disease.

According the CDC, approximately 300,000 people may contract Lyme disease in the United States each year, with the northeastern U.S. showing the highest rates of incidence. The disease also affects thousands of dogs, horses and other domesticated animals. The opportunity to approach this problem from a One Health perspective of human, veterinary and environmental health in the region spurred the creation of the SUNY Lyme Working Group — a collaboration of researchers across fields and institutions that met at the Cornell University College of Veterinary Medicine Jan. 17 to share data and discoveries around this growing epidemic.

Researchers and clinicians from Cornell University, Binghamton University, SUNY College of Environmental Science and Forestry and Upstate Medical University gathered to explore translational research opportunities and potential collaborations on this major issue that threatens both humans and animals in our region.

Lyme disease also poses challenges and threats to veterinary patients. Dr. Bettina Wagner, Chair of the Department of Population Medicine and Diagnostic Sciences and primary CVM organizer of the event, gave the keynote talk on the veterinary medicine portion of the meeting, which outlined cutting-edge Lyme diagnostics for canine, equine and other species, even potentially humans. Treatment in animal patients happens much later than in humans, as the clinical signs of the disease are not noticeable until between two and five months after infection. “Unfortunately, a horse cannot tell you that they feel a little achy or lethargic the way a human can,” Wagner noted.

The working group also discussed other facets of Lyme, including surveillance and genetic diversity of B. burgdorferi, the bacteria responsible for the disease, and using system dynamics modeling to assess risk of Lyme disease. The group also received an update on the latest efforts of the Northeast Regional Center for Excellence in Vector Borne Diseases (NEVBD) from Cornell entomologist Dr. Laura Harrington.  She shared highlights from the NEVB last year, such as establishing a Lyme and tick-borne disease surveillance program at CVM’s Animal Health Diagnostic Center, forming regional partnerships and training programs, and improving surveillance tools such as the new smartphone TickApp to track tick and human interactions.

“It was a great meeting, with many opportunities for new collaborations,” said Wagner. “It provided an excellent environment for researchers from different institutions and fields to ask questions and learn from each other.” Several research collaborations were established during the meeting, with plans for another working group meeting next year, possibly with even larger participation from other institutions.