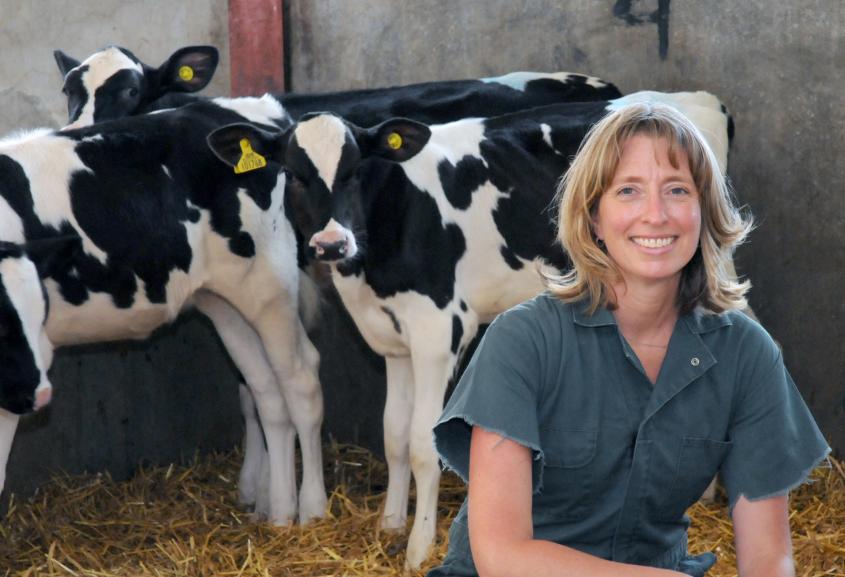 Kristen Reyher, D.V.M. ’02, discovered her calling in veterinary medicine when she spent a summer in Malawi. While traveling around the country on a mission trip in college, she noticed how many people depended on cattle, goats, sheep and chickens for their livelihood.

“When I went to Africa, I looked around and I thought, ‘Wow, this would be the way to impact people’s lives — to work with the animals that keep them alive,’ ” says Reyher, who now teaches veterinary epidemiology and population health at the Bristol Veterinary School in the United Kingdom.

When she arrived at Cornell’s College of Veterinary Medicine, Reyher began looking for opportunities to learn as much as she could about production animals. A scholarship allowed her to travel back to Africa the summer after her first year. There, she worked with a veterinarian in Rwanda who trained women to care for animals in rural areas where farmers did not have access to veterinarians.

At Cornell, she joined the Bovine Club and took night classes in farm animal management software. “I got a good education in all the species, and yet extracurricularly, had time to focus on farm animals,” she says.

Her experiences abroad and at Cornell led her to a lifelong commitment of working with livestock and helping decrease the debilitating effects of bovine mastitis, the most common disease among dairy cattle worldwide. Her journey took her to Canada, where she earned a Ph.D. in veterinary epidemiology from the Atlantic Veterinary College at the University of Prince Edward Island and where she managed data collection for the National Cohort of Dairy Farms, Canada’s largest livestock research initiative.

When she joined the faculty at the University of Bristol in 2012, Reyher began focusing her research on the impact of antibiotics on livestock and human health, a natural progression from her mastitis research, as the disease leads to more use of antibiotics in dairy cattle than any other. As in humans, overuse of antibiotics in livestock can result in bacterial immunity to these important medicines, Reyher says.

One focus in her research on animal health and reduction of antibiotic usage in livestock is improving communication between veterinarians and farmers. Reyher and her research team have adapted a communication methodology from the medical sciences called Motivational Interviewing. The approach encourages veterinarians to work closely with farmers to explore goals for their farm operations and to tailor veterinary advice to the farmers’ motivations.

“There’s often a mismatch between what vets think the clients and the animals need and what farmers think the animals need, not just in the realm of antibiotics but generally in veterinary medicine,” she says. “One reason for the low uptake of veterinary advice may be that the vet doesn’t understand the goals of the farm and may tell the farmer to do things that aren’t feasible.”

One strategy that can eliminate such communication problems is training veterinarians to ask questions and reflect back the farmers’ concerns. Since 2014, Reyher and her team have developed a communications manual that they have used to train hundreds of veterinarians across Europe and North America.

Reyher has also built an interdisciplinary team of researchers called the Antimicrobial Resistance Force, which has received over $10.5 million of funding for its pioneering work in antibiotics use. The team was the first to demonstrate that halting use of the highest priority antibiotics on cattle was possible with no negative effects on the animals.

“We stopped using these protected medicines but showed that there was no decrease in animal welfare, health or production parameters,” Reyher says. “The animals were as healthy, if not more healthy, after we stopped using the antibiotics than before. Our work can give confidence to vets worldwide that finding alternatives to using these medicines in livestock is both possible and desirable if we are serious about protecting human and animal health.”