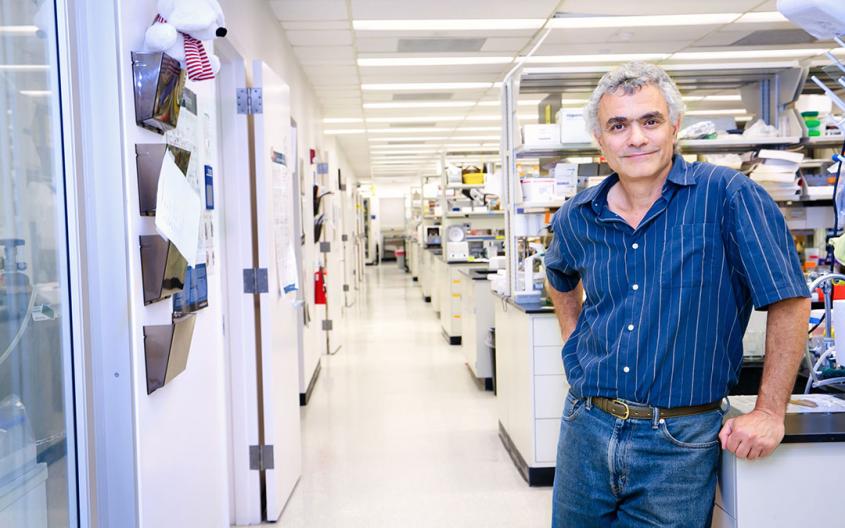 Dr. John Schimenti's lab's investigation into the effect of genomic instability on sex ratios illustrates the increasing recognition that males and females do not have identical biology. Photo of Schimenti by Frank DiMeo for Cornell Research.

New research from the College of Veterinary Medicine shows that heightened levels of genomic instability can prove fatal to female embryos in mice.

In the paper, published Feb. 20 in Nature, senior author and professor of genetics Dr. John Schimenti found that when DNA is damaged during its embryonic replication process, the inflammation response from the cell is much more likely to be lethal to female embryos, which do not have the intrinsic protection of testosterone that male embryos have.

The Schimenti lab initially set out to discover mutations in genes that caused elevated genomic instability (GIN), with the ultimate purpose of identifying new tumor suppressors. They indeed isolated mouse strains with phenotypes of cancer susceptibility due to DNA repair or replication defects, both of which cause GIN. The lab also found mice with infertility due to defects in meiosis or germ cell development.

While working with one of these strains that possess the cancer-causing Mcm4Chaos3 DNA helicase mutant, research associate Dr. Adrian McNairn and former graduate student Dr. Chen-Hua Chuang, the first and second authors on the paper, noticed that they produced more male than female mutant offspring. They pursued that thread of inquiry for this paper. Schimenti described it as an unexpected development. “It shows that serendipity still plays a major role in science,” he said.

Few have investigated the effect of genomic instability on sex ratios, and this research illustrates the importance of increasing recognition that males and females do not have identical biology. “If you ignore sex in a study of any sort, you’re not getting the full story,” said Schimenti.

“If you ignore sex in a study of any sort, you’re not getting the full story.”

Embryonic development is a period of rapid cellular proliferation. As an embryonic cell grows, it must replicate its DNA and make copies of all the chromosomes, amounting to approximately three billion building blocks. If there are more defects than normal in that process – if the genome is unstable – a hunk of nuclear DNA can end up in the cytoplasm of the cell. The cell interprets this as a foreign threat and mounts an inflammation response, proving lethal to female embryos in the process.

Scientists have extensively researched genomic instability in cell culture and cancer studies because of its connection to tumor initiation and growth. Whereas most of that work is performed at a basic level to understand its fundamental mechanisms, it was Schimenti’s research in whole animals that led to this discovery.

“Working in a whole animal is a different story than working with cells in a petri dish,” said Schimenti. “It’s much more complicated but reflects the complex impact of animal physiology.”

Schimenti anticipates that their findings will cause researchers to examine past records in which they’ve dealt with similar mutations to account for the sex bias. “In future work, we’d like to examine exactly why these female embryos are dying, the cells tissues that are culpable and to ultimately find if this is happening in humans as well,” he said.

This research was funded by a grant from the NIH.