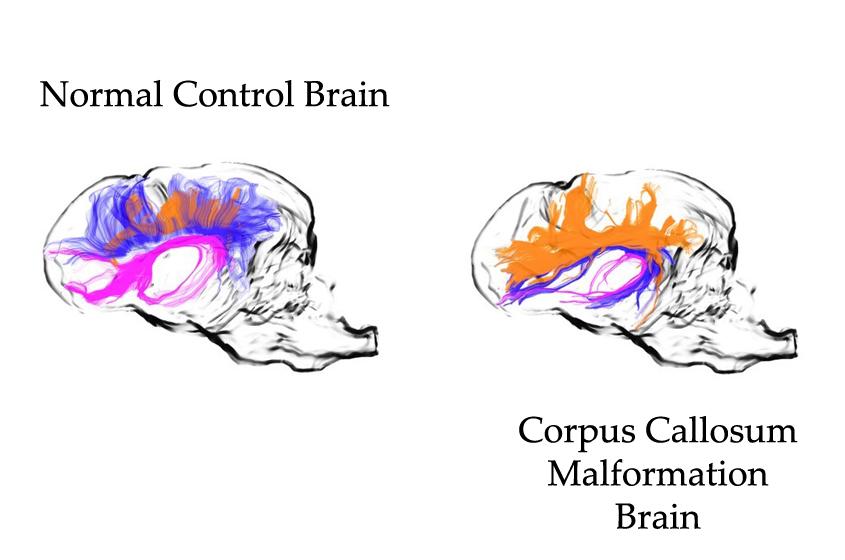 Side-by-side neuroimaging of a normal canine brain and that of four-month-old puppy Hank, whose MRI confirmed he had a rare malformation – a dysplasia – of the corpus callosum. Image by the College of Veterinary Medicine.

Four-month-old puppy Hank was so lethargic that his dog-sitter brought him to an emergency veterinary clinic. Although the blue-tick coon hound was severely dehydrated, he tested negative for the distemper virus and no other explanation could be found for his worsening condition. Owners Kate and David Cross rushed home from vacation and faced the options of either putting Hank to sleep or trying to get him to Cornell’s Companion Animal Hospital for diagnosis.

“He was hooked up to fluids and in really bad shape. We weren’t sure he’d survive the four-hour trip to Cornell but weren’t going to give up on him,” said Kate Cross.

They arrived at Cornell’s Companion Animal Hospital nearly at midnight. Blood work ordered by emergency services showed him to have severe abnormalities in his electrolytes, particularly a high sodium content. “Because of the electrolyte abnormalities and neurological deficits at presentation, doctors were suspicious of a brain malformation,” said Dr. Philippa J. Johnson, radiologist with the Companion Animal Hospital. An MRI confirmed he had a rare malformation – a dysplasia – of the corpus callosum. This is the intersection of the right and left sides of the brain and place where the fibers from the right travel through to the left. The malformation resulted in Hank not having the urge to drink. Since there were other dogs in the home regularly emptying the water bowls, it was easy to miss that Hank never drank water.

The hospital gave Hank fluids to bring his electrolytes back to healthy levels. To avoid dehydration in the future, doctors prescribed a low-sodium diet and instructed the owners to add 1,000 ml of water to each serving of Hank’s food so he would consume water as a byproduct of eating.

“It was a rough couple of weeks but it’s all better now. At the end of the day, all we had to do was change his diet and add a lot of water to the food,” said Cross. “He’ll never learn new tricks, but he’s a very sweet boy who loves kids and other dogs, cuddling and playing with his toys. I’d do it all over again.”

With Hank’s health back on track, Johnson recognized that Hank’s brain malformation was poorly understood and would benefit from evaluation with the advanced neuroimaging technique of tractography. There is little confirmed information about dysplasia of the corpus callosum and this would let them explore the disease further.

For Cross, it was an easy decision. “If it could be beneficial for any other dog owner, it would be worth it,” she said, noting it was at no cost to them and wasn’t invasive for Hank.

“The owners were amazing. They were open and enthusiastic about participating and so supportive of wanting to help us learn more about this disease,” said Johnson.

At nine months old, Hank underwent another MRI to see how the brain had changed over time. Diffusion tensor imaging technology was then performed on Hank and on a healthy dog as a control for the study. Doctors took that data and used tractography to virtually dissect the white matter projections in both dogs.

“This technique uses the diffusion of water into the brain to map out the white matter tracks and allows us to map virtual white matter of the dog,” said Johnson. White matter is one of the two major types of brain tissue – the gray matter is where thought (a brain’s signal) is formed, and white matter is like a series of roads that send the signal where it needs to go.

The comparison of Hank and the control dog demonstrated the malformation in a unique way and allowed them to work out exactly how the white matter was formed.

We learned more about this disease than was known or recorded before.

“We learned more about this disease than was known or recorded before,” said Johnson.“One of our key questions was, ‘When you don’t have a corpus callosum what happens to the white matter?’ It turns out Hank had formed Probst bundles. (The track that should have crossed right to left created bundles that ran front-to-back, toward the nose.) There was not a failure of track development, but rather a failure of formation. He has the tracks, but they go to the wrong place.”