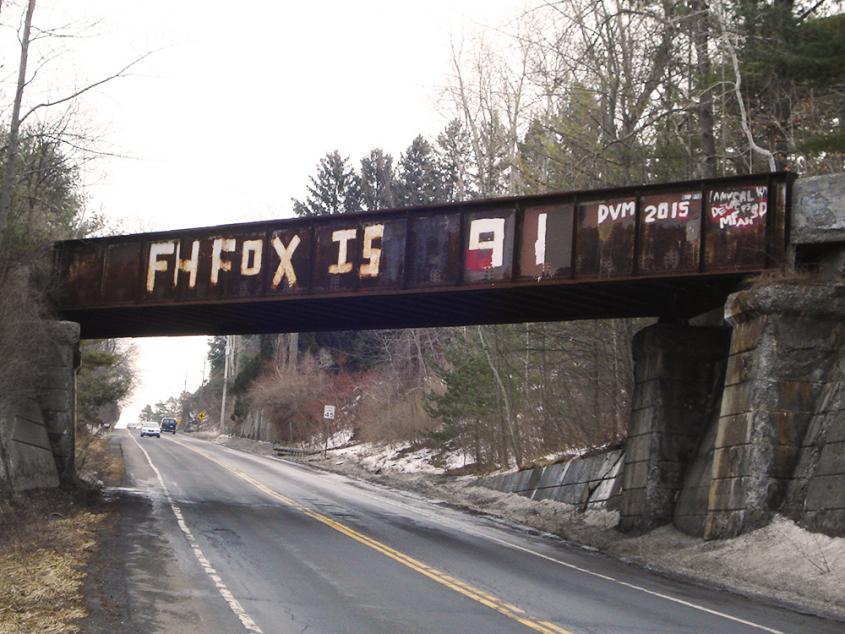 Fox served as professor of large animal medicine at the college for over 40 years and was known for his innovative teaching techniques and clinical skills. He and his students had a lively relationship and often played pranks on each other without warning. Fox was notoriously irascible about his age, so for his birthday one year, veterinary students spray-painted a ventilator shaft at the college to read: “F H FOX IS 69.” They then moved this birthday counter to its locally-famous location — a Varna, New York, railroad overpass on Route 366, which he would need to pass regularly on ambulatory visits in the area. They updated the counter every year until his passing in 2015. It now reads: “F H FOX IS 4EVER.”

Below are several of Fox and his students’ silliest pranks, taken from The Fox Chronicles, a book students compiled of his exploits for his birthday in 1993, which was also the year of his retirement. They write in the preface: “We have compiled these stories in the hope that they will bring a chuckle to Dr. Fox as he peruses them. We also hope that they will clearly show that the great man was outfoxed on more than one occasion in his illustrious career.”

1. Fox abandons a student in the Danby countryside

Fox and a student were struggling to suture a laceration on the bridge of a spunky farm horse’s nose. The horse reared up and flailed against the student with each clip. After critiquing the student’s form, “Francis drove off and left me to find my own way home!”

While supervising an ambulatory visit to a local farm, Fox looked on while a student took the pulse of a heifer with dysentery. The student was doing so “gingerly, with one finger under the tail,” they write. Never one to let such an opportunity pass, Fox suggested the student hold the tail tighter, leading to a messy misadventure for the student.

His students describe Fox as wily and snarky, a man who enjoyed sending them off into barns on ambulatory visits to clean cows. While they were working, Fox would sit with his beagle Tico in the ambulatory vehicle and eat up the students’ lunches. “This habit was curtailed,” they write, “when the students made ‘tuna fish sandwiches’ with cat food.”

In 1956, Fox came across a student sweeping the floors of one of the old college buildings. After “moaning and groaning as usual about being overworked and under-appreciated,” Fox bet the student he couldn’t even carry him up the stairs. The student took his bet, carried him three floors — passing esteemed professor Myron Fincher, D.V.M. ’20, M.S. ’25, on the way — but never quite managed to collect the 10 dollars Fox promised.

Fox was famous for fuming when students arrived late to his classes, and would embarrass anyone who wasn’t in a seat at starting time. In 1978, a group of 10 students decided to harass him by coming in late at different times and in increasingly bizarre manners. The first one was simply five minutes late, another slammed the door behind him two minutes later, a third came in carrying a tray with cereal on it, and so on. One student crashed his bike into the radiator, then “took off my helmet and backpack, apologized for oversleeping and sat down.” The tenth student waltzed in “wet from a shower and wearing his robe,” proceeding to undress and change into his clothes there in the classroom. At that point, both the class and Fox were in stitches: “He threw up his arms and smiled.”

Learn more about Fox’s life and history at the College of Veterinary Medicine in ‘Scopes, Cornell’s Ezra Magazine and the Ithaca Journal.