Show horse able to compete in U.S. Pony Finals thanks to closed castration procedure at Cornell 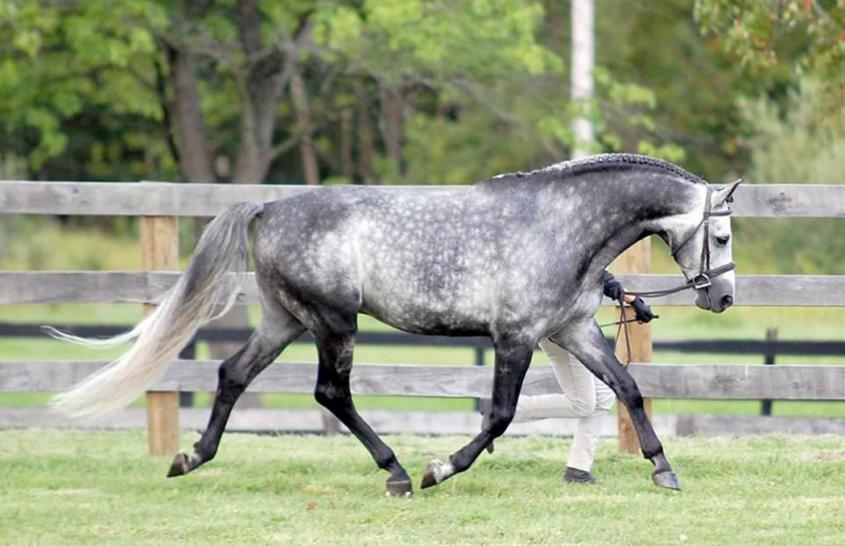 Thanks to Cornell’s College of Veterinary Medicine Equine Hospital, a girl and her horse got the chance to be champions. Castrating an older stallion can come with higher risks — however, the medical team at Cornell’s Equine Hospital successfully performed a closed-castration procedure less than two months before a crucial qualifier competition.

Haylee Scandell began training her horse Sa-Lyn’s Kenley Trademark when she was just 12 years old and they have become a dynamic duo in competitions since. Now 18, Scandell is currently in her last year competing at the junior ranks and U.S. Equestrian Federation rules only allow geldings to compete beyond this level. Haylee and her mother, Maria Scandell, chose to have Trademark castrated so the two could continue to show together. They also had breeding doses of semen collected and frozen (cryopreserved) to leave open the option of breeding him in the future.

“He’s always been a good, really amazing boy,” says Maria Scandell. “She loves him, so we made the decision to have him castrated so they can move on together and fulfill her hopes and dreams of qualifying him and competing at U.S. Pony Finals in Lexington, KY.”

At eight-years-old, Trademark was much older than the optimal age for castration (which is typically under two years) and at higher risk of post-surgical infections, bleeding and other complications. The Scandells decided to take him to Cornell’s College of Veterinary Medicine Equine Hospital for the best chance of success.

“Cornell is one of the best equine facilities around,” Maria Scandell says. “I wanted him to be in the best place he could be, particularly given his higher risk. And, not everybody will collect and do cryopreservation of semen.”

The Theriogenology Section of Cornell’s College of Veterinary Medicine performs most of its work, including collections, at the Cornell Equine Park. (This is just around the corner from the full-service large animal hospital.) The department worked with Trademark to test his semen quality when he was younger. Prior to his castration, they did two collections from him and then cryopreserved these so the Scandells could store them indefinitely.

“He was lovely to work with, very straightforward for his collections,” says Sarah Jane Ruby, veterinary assistant with the Department of Theriogenology. “He had good semen quality and they went home with 18 to 20 breeding doses of frozen semen for their future use.”

At the Equine Hospital, Dr. Rebecca McOnie, Equine and Farm Animal Surgery resident, and attending faculty member Jon Cheetham, Ph.D. ’08 performed a primary closure castration on Trademark, rather than a simple castration. “Because he was older than usual for castration, we recommended this closed procedure, which decreases the risk of post-op infection if the surgery is performed with appropriate asepsis,” McOnie explains.

A simple castration typically is performed under injectable anesthesia. Open skin incisions remain over the scrotum and close as they heal. It is very important that the horse is exercised daily to encourage appropriate drainage from the open incisions.

In the case of primary closure castration such as Trademark’s surgery, the procedure takes a little longer and uses general anesthesia. Surgeons make incisions over the groin region, rather than the scrotum, and close them so there are no open wounds.  A closed castration decreases the risk of post-op bleeding and swelling. “This is very helpful when you have a mature stallion with very substantial blood supply,” says McOnie. Surgeons typically recommend hand walking post-operatively to help minimize swelling.

In the year prior to surgery, Haylee and Trademark earned an award of distinction from the Welsh Pony and Cob Society of America and, at the American Welsh National in Tulsa, won every class entered as well as champion in half Welsh English pleasure, hunters and western pleasure. They also were U.S. Equestrian Federation high point champion for hunters and English pleasure.

Following his surgery in December of 2018, Trademark was off training for about five weeks. After two weeks of riding, he then successfully returned to competition as a gelding, and began to fulfill Hayley’s dream. “In his first show back, he qualified for the Pony Finals. He had to get champion or reserve at a USEF A Rated show and he got champion on the first try,” says Scandell.