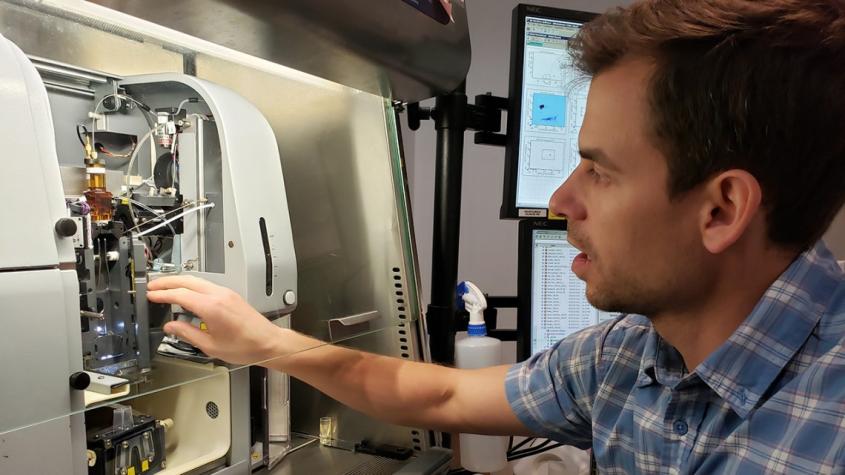 Adam Wojno, director of the Flow Cytometry Facility, sets up samples in a cell sorter. Photo by Elodie Smith/Cornell University.

Hailed as “transformative” and “a historic achievement” by faculty members, a strategic investment of close to $2 million directed by Provost Michael Kotlikoff has improved Cornell’s capabilities in flow cytometry, which is pivotal in cell research.

The investment from the provost’s office – along with significant contributions from the colleges of Veterinary Medicine, Engineering, Human Ecology, Agriculture and Life Sciences, and Arts and Sciences – allowed the purchase of four new flow cytometers. These will complement two existing instruments, one of which will be upgraded.

The six instruments will be housed in a new Flow Cytometry Core Facility, in two physical sites. The primary location is the newly renovated space in the Biotechnology Building (Room 140). A satellite operation will be located in the College of Veterinary Medicine, in the Veterinary Research Tower (Room T2 003).

This new facility will provide fundamental support to the new Cornell Center for Immunology and many laboratories working with cells campus-wide.

“Flow cytometry is essential to immunologists. It is equivalent to what a hammer is to carpenters,” said Brian Rudd, associate professor of immunology at the College of Veterinary Medicine.

Flow cytometry is used routinely in many life science areas to sort and analyze a large number of diverse cells rapidly.

The lack of flow cytometry resources on campus had been a long-standing issue, according to genetics professor Paula Cohen.

“Being able to do this sorting is at the heart of immunology.”

“In the 14 years I have been at Cornell, flow sorting has been a persistent problem,” said Cohen, director of the Center for Reproductive Genomics in the College of Veterinary Medicine’s Department of Biomedical Sciences, and associate vice provost for life sciences. “The problem is that we haven’t kept up with demand.”

Some faculty members have said they used to wait up to four months to run a flow-sorting experiment, and eventually stopped using the instruments on campus. “We used to go to Rochester to use their [flow cytometry] core facility,” said Rudd.

To fully comprehend the extent of flow cytometry needs on campus, Cohen sent a survey to all life sciences faculty. The number of respondents was massive. “This was really a universitywide issue,” said Rudd.

The new instruments will resolve the long wait time issue and allow explorations that were not possible before.

“Imagine you look at a stadium and you want to know how many people wear a blue shirt and how many wear a red hat,” Rudd said. “You can do that precisely and efficiently if you screen all the people one by one when they exit through the gates. That’s basically what a flow cytometer does.”

“Being able to do this sorting,” he said, “is at the heart of immunology.”

“The new Flow Cytometry Facility is truly game-changing for the immunology community,” said Gary Koretzky ’78, Cornell’s vice provost for academic integration and inaugural director of the Center for Immunology. “I expect that nearly all – if not all – laboratories affiliated with our new Center of Immunology will benefit from this investment into our research infrastructure.” Koretzky is a professor in the Weill Department of Medicine at Weill Cornell Medicine and an adjunct professor in the Department of Microbiology and Immunology in the College of Veterinary Medicine.

Koretzky said the Flow Cytometry Facility will also support recruitment efforts. The search for the next chair of the Department of Microbiology and Immunology at the College of Veterinary Medicine has started to identify potential candidates.

“Their enthusiasm for thinking about Cornell was sparked, in part, by the appreciation for the investment our campus is making into an important immunology core service,” said Koretzky.

Flow cytometers are useful in other fields beside immunology; approximately 25% of the users are from the College of Engineering.

Ben Cosgrove, assistant professor at the Meinig School of Biomedical Engineering, studies the decline of the ability of muscle tissue to repair as it ages. He uses flow cytometry to separate muscle stem cells from other cell types such as vascular and immune cells on muscle biopsy.

Flow cytometers are also used in conjunction of the CRISPR DNA-editing tool, where they help researchers sort and keep cells on which the DNA edits have worked.

As immunology research on campus grows, flow cytometry will attract new users and more instrumentation may be needed. The new Flow Cytometry Core Facility will allow for future growth.

Both core facility locations will be available to all members of the Cornell community. They are already partially operating and are expected to function at full capacity by late summer.