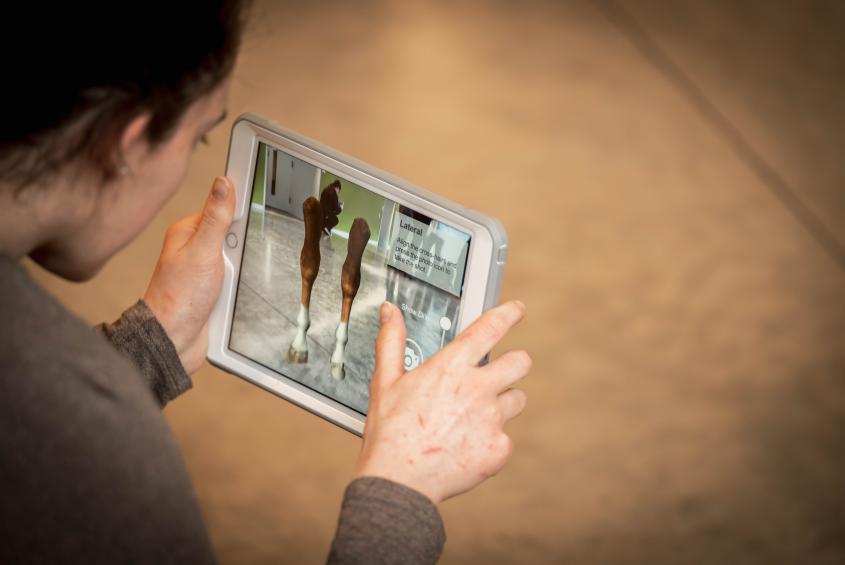 Cornell veterinary students can now get a leg up in learning equine anatomy, thanks to a custom-designed app created at the college. Students of VTMED 6101 (Anatomy of the Horse) were the first to practice taking radiographs of a horse’s carpus – equivalent to the human wrist – with the Equine X-Ray Positioning Simulator this spring. Developed by a team in CVM’s Educational Support Services (ESS), the augmented reality app superimposes a digital image of a horse limb onto the surroundings seen through an iPad.

The app was funded by an internal Educational Technology Innovation Grant and is part of the larger equine carpus modules project Miller created with the support of ESS to help D.V.M. students study parts of the equine musculoskeletal system --a subject students often find challenging.

“We try really hard not to teach anatomy as memorization,” Miller said. Instead, in a “flipped classroom” approach, she first had students complete out-of-class modules, such as dragging and dropping bone labels onto parts of a horse’s body in a series of online interactive exercises. “The idea is to better prepare them for more meaningful and in-depth classroom discussions,” she explained.

In class, students applied their new knowledge of equine anatomy to two real-life case scenarios. “The app came in at this point, as it allowed them to practice their radiographic positioning for the views that they would take as part of one of the case workups,” Miller said.

AR in the atrium

In the open space of the CVM atrium in front of the lecture hall, the twenty students each used an iPad to project a 3D model of full-size equine thoracic limbs onto the floor. They could walk around the simulation,

slide back the skin to reveal the underlying bone structure, position a light beam on the image, and capture a series of required radiographic views, which Miller later graded.

“Students can hear a lecture on how to take certain oblique radiographic views, but actually positioning yourself to take them might prove more challenging,” Miller said. Working with the app, she hopes, will give them the opportunity to practice and gain mastery and confidence without the need for innumerable live animals or the risks associated – for both practitioners and patients – with repeated exposure to x-ray beams. Thereby the augmented reality app bridges pre-clinical and clinical content and shows students early in the curriculum why the anatomy they are studying will be important in the field.

Getting to this point, however, took months of experimental work. “This was a fantastic project that brought together our full ESS team,” said lead instructional designer and project manager Andrea Beukema. After considering an online, computer-based 3D simulation, the team decided to try to create an augmented reality app to make the radiograph exercise more physical and realistic.

At the heart of the app is a 3D model of the equine carpus and the underlying skeleton built by medical illustrator and animator Allie Buck. “Normally, veterinarians have to crouch down to radiograph the distal equine limbs, so I made my model life-size, hoping that students would naturally feel the need to kneel or crouch down to take their radiographs,” Buck said. “And they did.”

Julie Powell, ESS courseware programmer, then wrote the module with the Unity gaming software – a completely new challenge, despite using it to create online interactive games for other courses. “There is a steep learning curve for developing augmented reality applications; because this is such a new technology, there is little documentation or code sharing available on the internet,” Powell said. “It took me several months just to be able to display the equine carpus on the floor in front of the iPad.”

In the end, the team’s gamble paid off. “The app was amazing,” said Tyler Olson, D.V.M. ’22, a student in the class who had previous experience with augmented reality devices outside of the educational context. “I found it to be pretty self-explanatory and user-friendly.” This sentiment was shared by most of his classmates, who in course evaluations overwhelmingly responded that they found the app and out-of-class exercises to be helpful in learning the material.

“I had never used any augmented reality device, so I was blown away by how realistic it was,” said Stephanie Bandoski, D.V.M. ’22. “It was a lot of fun taking x-rays with instant gratification, since you knew immediately if you were angled at the right position. I’m very thankful Dr. Miller and the ESS team put in the effort to make this happen.”

Considering such positive feedback, the augmented reality app will likely become a fixture in Miller’s teaching. In fact, “I would like to integrate more of these type of experiences into the pre-clinical curriculum,” she said.

“I would have loved to have had this app when I was a student, first learning about positioning for equine oblique radiographs and learning the anatomy,” Miller said. “I’m so jealous of the technology the veterinary students have available to them now to enhance their learning. While nothing can fully prepare you for an emergency where you have primary case responsibility and emotions are running high, I think we are doing our absolute best to prepare our students while they are here.”

A different version of this story also appears in the Cornell Chronicle.