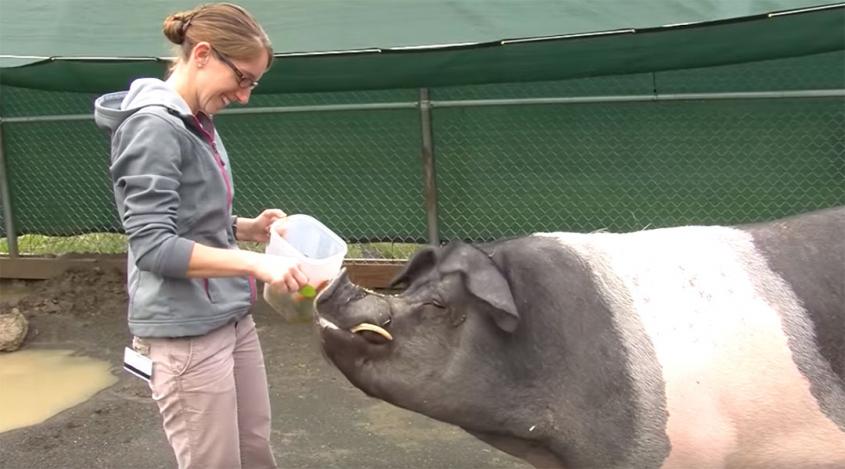 Although small animals such as dogs and cats are commonly treated for lymphoma, large animals are not. Nemo, a black and white Hampshire pig and namesake of Cornell's farm animal hospital, became a porcine pioneer when lymphoma struck.

Very few teaching hospitals are named after a pig — but the Nemo Farm Animal Hospital at Cornell is named for a very special former patient. Playful as a puppy even at 730 lbs., Nemo, a black and white Hampshire pig, became a porcine pioneer when lymphoma struck. As the first recipient of several unprecedented treatments and surgical techniques that extended and improved his life, Nemo became a case from which veterinarians learned, paving the way forward for future large animals to combat cancer.

George Goldner and Nancy Krieg brought Nemo to Cornell’s large animal hospital in 2013 for treatment of lymphoma, an aggressive blood cancer. The couple worried when four-year-old Nemo started losing energy and appetite in early 2013. Then one wintry March morning he had a coughing fit and left his heated barn to lie down in the snow. Goldner drove Nemo nearly four hours to Cornell’s hospital, where he was diagnosed with presumptive B-cell lymphoma.

“I want to do everything humanly possible for my animals,” said Goldner, who has a former dairy farm turned sanctuary in New York’s Catskill Mountains. “They’re rescues, and we keep them for life. Pigs are very smart. If you’re nice to them they’re very friendly. Nemo was a real performer; he was attractive, loved people and had a great personality.” Although small animals such as dogs and cats are commonly treated for lymphoma, large animals are not. “Although lymphoma has been documented in swine, there aren’t any documented cases of pigs being treated for it,” said Cornell University Hospital for Animals (CUHA) oncologist Cheryl Balkman, D.V.M. '98. “We adapted a treatment plan based on what we know is effective in dogs, cats and humans with lymphoma.”

CUHA clinicians from across fields worked together to prepare for intravenous medication delivery. In the first such procedure ever done to treat a sick pig, surgeon Dr. Jim Flanders, who had performed similar procedures in smaller animals, joined large-animal surgeon Dr. Susan Fubini to surgically implant a vascular access port. They ran a catheter up a vein in Nemo’s neck to a port behind his ear, creating a route for delivering drugs where they would be most effective while minimizing harm. Balkman and Nemo’s managing veterinarian, former resident Dr. Emily Barrell, selected and delivered the chemotherapeutic drugs. Barrell also took charge of his day-to-day care for 14 months. “I learned a great deal about medicine and oncology and what it means to be part of a collaborative team,” Barrell said, adding that Goldner’s and Krieg’s advocacy for animals reminded her why she enjoys being a veterinarian.

Nemo’s cancer went into remission for more than a year, which the pig spent at the hospital enjoying the company of staff and other patients. While Nemo eventually lost the battle to lymphoma, his case sparked the beginning of new approaches and knowledge for porcine and other large animal cancer patients

"Nemo was a real performer; he was attractive, loved people and had a great personality"

The Goldners commemorated their beloved pig with a generous gift, creating the Nemo Farm Animal Hospital at Cornell, which will expand the hospital’s capacity for studying and treating diseases of farm animals. The dedication ceremony took place June 23, 2015, where former Austin O. Hooey Dean of Veterinary Medicine Dr. Michael Kotlikoff, the Goldners and others spoke to the impact Nemo has made.

“Your gift will enable us to provide the kind of care, education and research into better treatments that Nemo experienced here,” Kotlikoff said. The dean also admitted to being a member of the pig’s unofficial fan club: “Nemo captured the hearts of faculty, staff and students in the hospital. I cherished my visits with him.”

Goldner praised hospital personnel for the high quality of their care for Nemo. “Extending his life, helping make [it] better, generally without pain or discomfort; this was done through great intelligence, knowledge and compassion,” he said. “There can be no higher achievement than of relieving the suffering and extending the lives of those who cannot speak for themselves, and you do that every day here through your work with animals, your research and your training of young people.”

In her remarks, Balkman said that the notion of treating a large pig “was rather daunting. There was nothing in the literature. We contacted other vet schools, looked at the listserv on oncology, but there was nothing out there. It really was a first for everyone involved,” Balkman added. “It has opened the door for other large animals to be treated for cancer.” Barrell expressed her gratitude to Goldner and Krieg for the opportunity Nemo presented her as a clinician. “You refused to accept the finality of Nemo’s diagnosis,” she told them. “Thank you for pushing us to try something new despite all the odds stacked against us. Because of your unfailing commitment to Nemo we have advanced what we know in our fields. Thank you for making us better vets.”