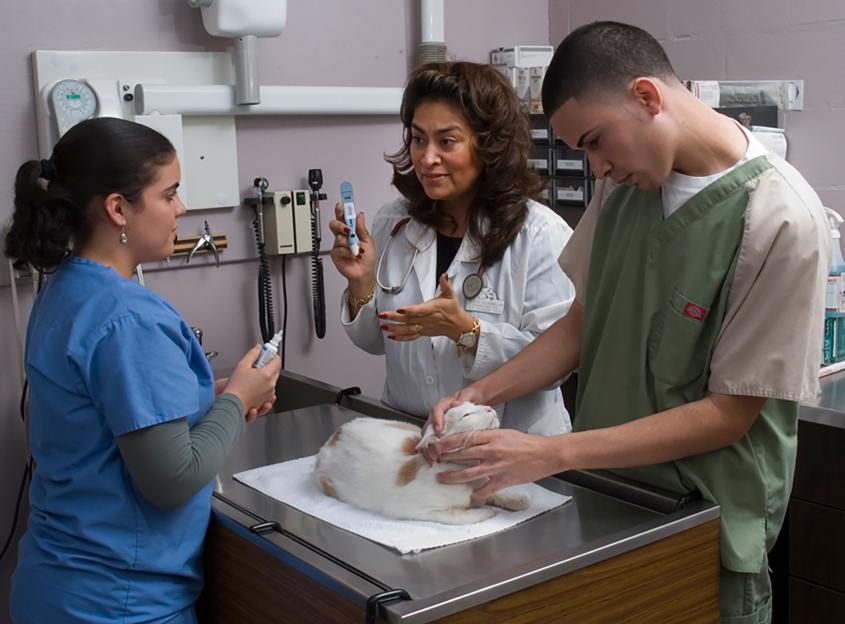 Elia Colón-Mallah ’88, D.V.M. ’92, was working for a veterinary practice on Long Island and encouraging the technicians to perfect their clinical procedures when she decided she wanted to mentor them in a more formal way.

The owner of the practice mentioned that Suffolk County Community College was hiring adjunct instructors to teach in the veterinary technician program. Within a few months, Colón-Mallah found herself teaching a veterinary cardiology and radiology course to first-year students at the college.

It was just three years after graduating from the College of Veterinary Medicine, and Colón-Mallah remembers being terrified to speak in front of a class full of students. Yet she was able to control her fears by drawing on the skills she developed at Cornell, from the public speaking she learned in an undergraduate class to acting with the Creative Paws theatre group as a veterinary student.

“At first I managed my fear as if I were acting,” she says. “But then I thought, at the end of the day, it’s knowledge of the subject matter and preparation with a cohesive learning plan that really help you become the best teacher you can be.”

As she was promoted from instructor to full-time professor, Colón-Mallah realized that students in the veterinary science technology program needed hands-on training earlier in the program. So in 2013, she launched what turned out to be a four-year effort to rewrite the curriculum and proposed adding two new small animal nursing courses. The new curriculum, which will begin this fall, will permit students to progress from basic to more advanced nursing skills over a total of three semesters.

As a teacher, Colón-Mallah sees her role as offering students a realistic view of the work they will do as veterinary technicians. “I see so many students working two or three jobs trying to become veterinary technicians,” she says. “Some students don’t really know what they’re getting into, and that’s where I come in.”

Veterinary technicians are an integral part of clinical practices, Colón-Mallah says, but she notes that they have a high practice attrition rate because of dissatisfaction with their role in their practice, low salaries, compassion fatigue and burnout.

Colón-Mallah has been active as a Cornell alumna, serving as a member of the Cornell University Council and the College of Veterinary Medicine Alumni Council. In 2006, she received the Cornell College of Agriculture and Life Sciences Outstanding Young Alum Award.

She views teaching as a way to use her education to help others who want to enter the profession. “I’m doing my very best to give back what I got,” she says. “While it’s important to achieve one’s goals, it’s equally important to turn around and help someone else find their way.”