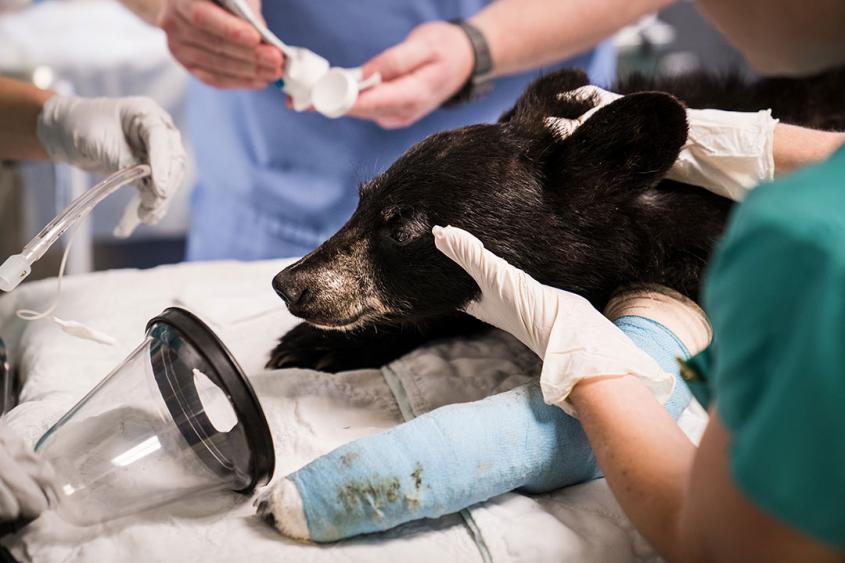 During the height of vacation season in the Adirondack Park, a black bear cub ventured onto a busy road – and met with one of the thousands of vehicles that traverse the park each summer. The collision broke the female cub’s left foreleg.

The accident took place on Route 3 in Franklin County, New York, on July 27. “We didn’t know if she was alive,” said Dianalyn Finn Martin, a passerby who saw the accident and stopped to help. “Then we saw her ears twitching and she moved her head.”

The cub managed to leave the road and climb a tree, where it clung until falling down the embankment. The New York State Department of Environmental Conservation (DEC) arrived on scene with wildlife biologists and technicians to monitor and retrieve her, said Martin. “We spent about five hours with her there.” No information is known about the cub’s family.

After successfully recovering the bear, the DEC reached out to certified wildlife rehabilitator Jean Soprano, who transported her to Cornell for veterinary care.

“We knew her foreleg could be repaired at Cornell,” said Soprano, who runs the Kindred Kingdoms Wildlife Rehabilitation Center in Pennellville, New York. “We often take wildlife to Cornell for medical treatment and we will receive wildlife from the clinic when continued care is needed.”

Cornell veterinarians assessed her injury and identified a comminuted fracture, where the bone splits into more than two fragments. They then prepped her for surgery. “Summer is our busiest time of the year in the wildlife hospital, as more people are out on the road or in nature interacting with wildlife and the environment,” said Sara Childs-Sanford, D.V.M. ’99, chief of service at the Janet L. Swanson Wildlife Health Center. “Many of our patients are hit by cars, and sustain significant and sometimes fatal trauma.”

Veterinary orthopedic surgeon Dr. Kei Hayashi, resident Dr. Greta VanDeventer and the wildlife hospital team successfully mended the cub’s fracture, which took a plate and screws to repair. “There were multiple small fragments which made it challenging to put pieces together,” said Hayashi. “The broken bone column is fully reconstructed and the chance of full recovery is good if we can keep her from falling (or being hit by a car) for a few months.”

Soon after the successful surgery, the bear was entrusted to the care of Soprano’s rehabilitation center.

At first, said Soprano, she kept to her den box so much that they had to leave food at the door for her. Now that some time has passed, however, she is eating everything given to her and moving freely about her habitat.

“The female yearling bear is doing well,” said Soprano. “We are monitoring her with a closed-circuit camera and are delighted at how well she is walking.” The cub is the 140th bear that Kindred Kingdoms has rehabilitated, “and the only one that won’t eat cantaloupe. She far prefers apples and acorns.”

When she is fully recovered and old enough to survive on her own, the bear will be released back into the wild. “We plan on keeping her for the winter and anticipate a spring release,” said Soprano.

The Janet L. Swanson Wildlife Health Center offers advice on what to do if you find an injured animal. Learn more about the animal patients treated at the wildlife hospital and the work Cornell veterinarians do to heal them.

A version of this story also appeared in the Cornell Chronicle.