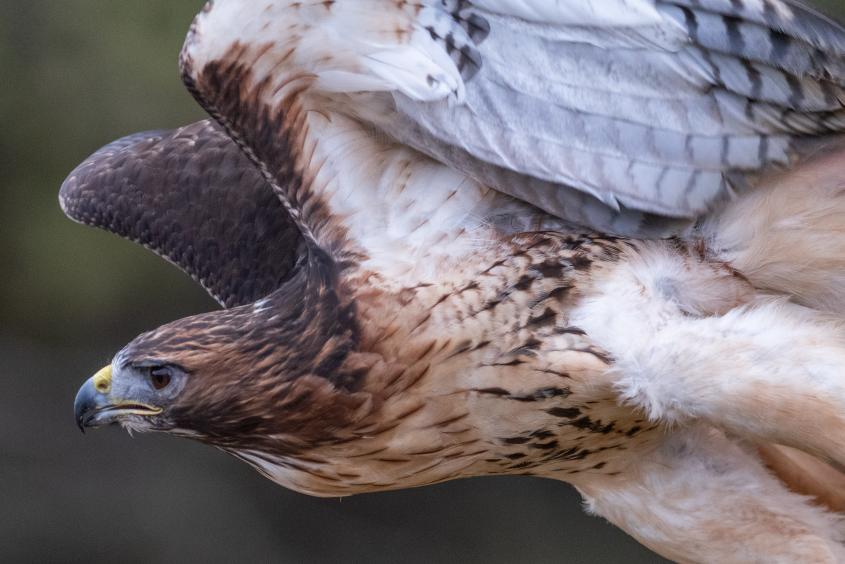 Eighty percent of red-tailed hawks do not survive beyond their first year of life. If wildlife managers release only juvenile hawks into the wild, most of those carefully reared birds would die before reproducing. The StaPOPd software can help scientists avoid these kinds of issues.

It’s a common sight in the Northeast: Flocks of wild turkeys strutting across the road, frustrating commuters. But this wasn’t always the case.

Less than a century ago, Eastern wild turkey had been nearly eliminated from the Northeast, requiring careful planning by wildlife ecologists to reestablish them in their natural habitat. The effort took decades.

To help address this problem, a multidisciplinary team with the Cornell Wildlife Health Lab has created StaPOPd, an interactive online tool that tells users exactly how many plants or animals they need to introduce into a habitat in order to establish a stable population.

“The theorems that support these calculations have long been known in mathematics,” said Brenda Hanley, a postdoctoral researcher at the College of Veterinary Medicine and an expert on population mathematics. “However, making these equations readily accessible to wildlife managers for planning reintroduction activities is unique.”

The impetus for the idea came when the New York State Department of Environmental Conservation asked the wildlife health lab for help in establishing populations of the New England cottontail, a rabbit species that has declined significantly in the region despite breeding and release programs.

Experts at the lab knew that there was a body of mathematical knowledge in population dynamics that could be harnessed to solve the problems they were facing. So Hanley, wildlife veterinarian Dr. Beth Bunting and wildlife disease ecologist Krysten Schuler took up the challenge.

The team took established equations and developed an online interface that allows non-mathematicians to harness the information for real-world application. The software asks users to enter their management end goals – the number of animals that they wish to exist in their restoration area after a certain number of years.

The  then calculates, factoring in natural population dynamics, the exact number of animals in each stage in the life cycle needed to achieve their goal.

A key input for the StaPOPd software is the number of life stages. A life stage represents a period of time in an animal’s life when its survival or fertility rate is distinctly different from other stages.

Some species, like rabbits and squirrels, have just two stages: juvenile and adult. Other animals, such as the bald eagle, have three: hatchling, immature and adult. In fact, plant and animal species can be modeled with any number of stages as long as  appropriately reflect the biology of their life cycle.

“It is tempting to think of all individuals as being the same,” said Hanley. “But in terms of reintroduction efforts and population dynamics in general, the same individual adds different value to the population at different stages in its life cycle.”

If that detail is ignored, reestablishment efforts can go to waste, says Bunting. For example, 80% of red-tailed hawks do not survive beyond their first year of life. If wildlife managers release only juvenile hawks into the wild, most of those carefully reared birds would die before reproducing.

However, introducing a large group of breeding adults is also problematic. “If all you introduce are breeding adults, there will be a lag time before their offspring can be mature enough to reproduce, during which you’ll see a drop in the population during that period,” Hanley explains. “Stable numbers that do not exhibit large swings is the goal of population managers.”

Previous reintroduction efforts have suffered from population volatility issues. In the 1970s, wildlife managers worked to re-establish bald eagle populations into the wild without taking into account the unique combination of individuals in each life stage to release. As a result, the eagle population oscillated for decades before eventually finding stable growth.

“Populations don’t do well if they’re not in balance with each other,” says Schuler.

Besides enabling managers to align population into stable growth patterns, StaPOPd can save scientists considerable effort.

“Reintroduction projects are often exciting because people feel like positive action is being taken, but we also want people to take a step back and run the numbers. When you look at the math, does this project actually work?” said Bunting. “If there aren’t enough young to maintain the breeding adults in a stable population, you have to change what you’re releasing out into the environment.”

Being able to foresee how certain release efforts could play out from the perspective of innate population dynamics is critical for wildlife conservation projects both far and wide. The species are as diverse as the geographic applications. So far, it’s been used to assist Hanley in her research on bald eagle population dynamics, Bunting’s hellbender conservation work in upstate New York— and even managers who work on guanacos, a type of south American camelid, in Argentina have taken notice.

“The interdisciplinary teamwork is saving managers a lot of effort,” says Bunting. “We may not necessarily have to track the animals in the field for 10 years to see how that population is doing. So we’re hopeful we can save government agencies and scientists’ time, effort and money when doing these projects.”

Another version of this story appeared in the Cornell Chronicle.