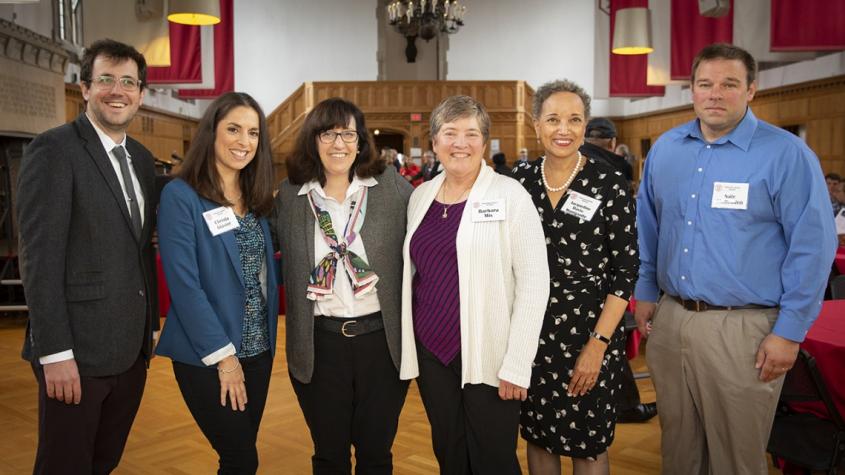 The event brought the alumni and their families together for a lunch, panel discussion and Q&A with university leaders, faculty, trustees and current students.

The Hometown Alumni Award was launched in 2018 by Cornell’s Division of University Relations, in collaboration with Alumni Affairs and Development, to honor Cornell graduates who have returned to their home counties to start or enhance a business or nonprofit, and who regularly volunteer and are deeply engaged in their communities.

Mix said much of her inspiration and passion in her veterinary work and teaching is rooted in wanting to pay forward the mentorship she received from local teachers and veterinarians when she was a teen and from her Cornell professors.

The six awardees are:

Barreiro was unable to attend in person, but joined the panel via videoconference on a large screen.

“It is hard to imagine a more fitting event for Homecoming,” said Cornell President Martha E. Pollack, who welcomed the honorees. The award initiative is unique, she said, and also completely “consistent with who we are at Cornell. We want to recognize these wonderful alumni who have gone back to their communities and are having a positive impact there.”

“We talk about impact – this is the model that we should all be trying to follow,” said Joel Malina, vice president for university relations. “Giving back when and where possible for the common good. It’s the quintessential Cornell trait, and it’s embodied here in these six individuals.”

An important element of the recognition ceremony, Malina added, “is for the stories of these wonderful alumni to inspire our current students to pursue similar paths after graduation.”