After surgery, mother and daughter are back to playing reindeer games 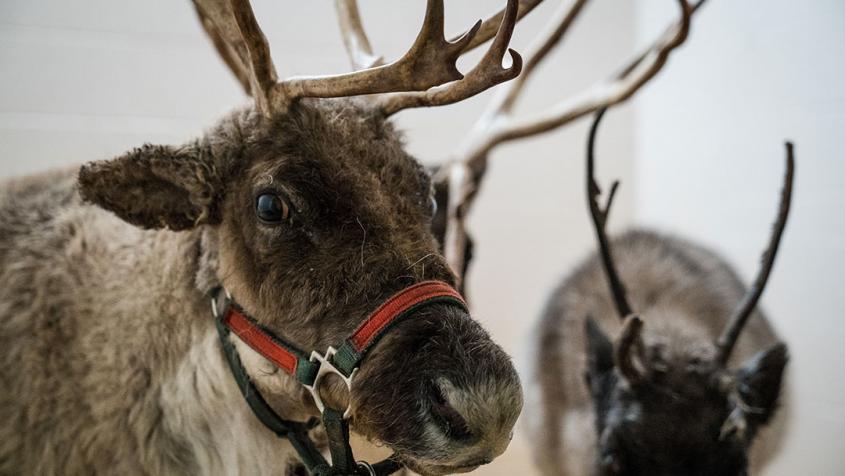 The mother reindeer, six-year-old Donder, had a milky cataract in one eye that developed after she snagged her eyelid on a fence. Her daughter, Dondersven, also developed cataracts in both eyes, which was apparent a few weeks after birth. Dr. Eric Ledbetter of the Cornell University College of Veterinary Medicine corrected the cataracts by removing the clouded lenses during surgery. All photos and video by Darcy Rose.

A reindeer mother-daughter duo are ready to report for duty this holiday season following cataract surgery at the Cornell University Equine and Nemo Farm Animal Hospital earlier this year.

The reindeer live at Locust Hill Farm in Caton, New York, outside of Corning, and travel with their owner, Michael Cary, D.V.M. ’82, to holiday events around the Northeast. When cataracts threatened their vision, however, Cary brought them to Cornell for consultation. Dr. Eric Ledbetter, professor and section chief of ophthalmology at the Cornell University College of Veterinary Medicine, performed the procedure that restored their sight.

“It went great. I don’t think they could look better at this point after surgery,” said Ledbetter. He has performed cataract surgery on dogs, cats, reptiles, birds, horses, cows, alpacas and even llamas. “But this is my first reindeer.”

Before the surgery, even Rudolph’s red nose wouldn’t have been bright enough to guide these reindeer. The mother, six-year-old Donder, had a milky cataract in one eye that developed after she snagged her eyelid on a fence. Without vision in that eye, she was nervous when animals or people approached from that side — not ideal for a reindeer that interacts with the public. Her daughter, Dondersven, also developed cataracts in both eyes, which was apparent a few weeks after birth. The young reindeer was still running about, but was cautious around fences and other obstacles.

The cause of the cataracts is unknown, but Cary, who owns Towne & Country Veterinary Hospital in Corning with his wife Ann Freer Cary ’76, D.V.M. ’82, and son Collin Cary ’08, D.V.M. ’13, suspects that steroid eye drops may be to blame. He used the drops to reduce inflammation after her eyelid injury while Donder was pregnant, which may also have exposed Dondersven to the steroids.

Ledbetter corrected the cataracts by removing the clouded lenses during surgery on Sept. 4. Little is known about cataracts in reindeer, so Ledbetter relied on information from more common large animals, such as cows and horses, where there is a 10 to 20 percent chance of serious complications after surgery.

According to Ledbetter, the biggest challenge was positioning the reindeer while anesthetized so he could access the eyes without impaling himself on an antler. “You can’t lay them on their backs, and you can’t lay them flat on their side,” said Ledbetter. He estimates that he spent about 30 to 45 minutes performing the surgery on each eye, and the same amount of time positioning the animals correctly.

Initially scheduled for August, the surgery was pushed back due to concerns about damaging the delicate velvet that covers the antlers. The velvet is attached to blood vessels, which helps cool the animals in the summer, but causes bleeding when injured. In the fall, however, the antlers “dry out” and the reindeer rub off the velvet, revealing the bone underneath. Reindeer are the only members of the deer family where females also grow antlers.

Outside of Alaska, reindeer are a rare sight in the U.S., and even longtime hospital staff were fascinated by the unusual patients. Wild and domestic reindeer herds roam the tundra of Europe and Asia, but some reindeer were imported into Alaska from Siberia more than 100 years ago. “Reindeer have been domesticated for thousands of years,” said Cary. “They have cave paintings of reindeer being hunted and herded from the Ice Age.”

A fellow member of the “Santa’s Second String” herd that the pair belong to, named Christmas Curly Bear, also came for a checkup. She had surgery in August after getting food stuck from a hole in her throat pouch, which reindeer use to make mating calls. Christmas Curly Bear is one of several rare curly-haired members in the Carys’ herd of 38 reindeer — the second largest herd in the state. Unlike straight reindeer hair, the curly kind can be gathered and spun into yarn.

During the recent checkup, Ledbetter and Dr. Nita Irby, a large animal ophthalmologist at Cornell, dilated the reindeers’ eyes and examined them to ensure that they were clear of inflammation, healing as expected and that tiny clumps of lens tissue had not regrown inside the eye. They were pleased to see that both mother and daughter were healing nicely.

Cary also noticed a marked improvement in the reindeers’ behavior since the surgery. “When Donder had the cataract, she would be less dominant, less sure of herself,” said Cary. “Now that she’s had the surgery, she was pushing all the yearlings around, telling them where they could go.”

All the reindeer are now home for the holidays and ready to help out at community events this season.

“I know she still had one visual eye and we didn’t have to do the surgery, but it was worth it,” said Cary. “Now she can go on display and be happier.”