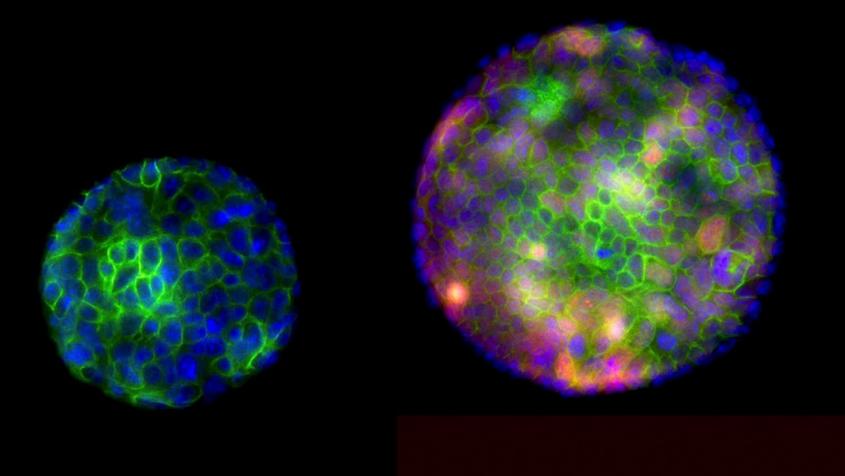 A Cornell study provides important new insights into a common and deadly type of gastric cancer.

Incidence of this cancer, called gastric squamous-columnar junction (SCJ) cancer, also known as gastroesophageal cancer, rose 2.5 times in the United States between the 1970s and 2000s, while cases of all gastric cancers have decreased by more than 80% since the 1950s. Still, gastric cancers overall are the fifth most common tumors and the third-leading cause of cancer death worldwide.

The study, published Jan. 3 in the journal Nature Communications, identifies a key pathway in gastric SCJ cancers that provides a promising target for future study and therapy.

The researchers found that the progeny of a type of stem cell (Lgr5+) collect in large numbers and promote cancer in areas where two types of stomach tissues meet.

“On a global level, gastric cancer, especially gastric squamous-columnar junction cancer, is a very frequent disease and is very unfavorable in terms of prognosis, and so any new development in how the cancer forms and how we can treat it is very exciting,” said Dr. Alexander Nikitin, professor of pathology and leader of the Cornell Stem Cell Program. Dah-Jiun Fu, a doctoral student in Nikitin’s lab, is the paper’s first author.

For the study, Nikitin and colleagues developed an experimental mouse model with two tumor suppressor genes that become inactivated under certain conditions. The model meets several parameters that are necessary for accurate research of this cancer. Previous mouse models used by other research groups had limitations, where mice only developed certain types of tumors or they died prematurely, thereby preventing study. But all the Cornell mice developed relevant forms of metastatic gastric SCJ cancers.

Previous research in Nikitin’s lab and at other universities has implicated Lgr5+ stem cells in a number of cancers.

“Our studies show that that’s not necessarily true for all types of cancers,” Nikitin said. His group found no evidence that Lgr5+ stem cells themselves contributed to gastric SCJ cancers.

The current paper used the mouse model and organoids (miniature, simplified versions of an organ) to reveal that, rather than Lgr5+ stem cells, large pools of progeny cells called Lgr5-CD44+ cells populated these junctions. Stem cells divide and when they do, they differentiate into more specialized cells. But at early divisions, cells are immature and have not yet differentiated, and these progeny were detected in the earliest discernable lesions and in advanced carcinomas. They were also found to be highly susceptible to transformation in tests using organoids.

“These findings offer an exciting possibility that the cancer-prone character of other transitional zones may also be explained by the presence of a large fraction of immature cells,” Nikitin said.

The study also shed light on a protein called osteopontin, which binds to a receptor called CD44+, initiating a number of downstream effects. The osteopontin-CD44+ complex controls the balance between stem cells and differentiated cells, and initiates the creation of more stem cells and cells with stem cell properties, such as Lgr5-CD44+ cells.

“In our case, this presence of osteopontin signaling keeps the [newly differentiated progeny] cells in an immature state,” Nikitin said. “This is probably one of the mechanisms for how you have quite large pools of immature [Lgr5-CD44+] cells.”

The researchers examined two populations of human patients and showed that, consistent with the mouse models, lower levels of osteopontin and CD44 correlated strongly with better patient survival, Nikitin said, while overexpression correlated with the worst prognosis of human SCJ cancer.

Future study will investigate testing osteopontin inhibitors and CD44+ antibodies to possibly prevent the buildup of Lgr5-CD44+ cells to treat these cancers.