Making a difference: Jerry Bilinski '67, D.V.M. '69, reflects on Board of Trustee membership 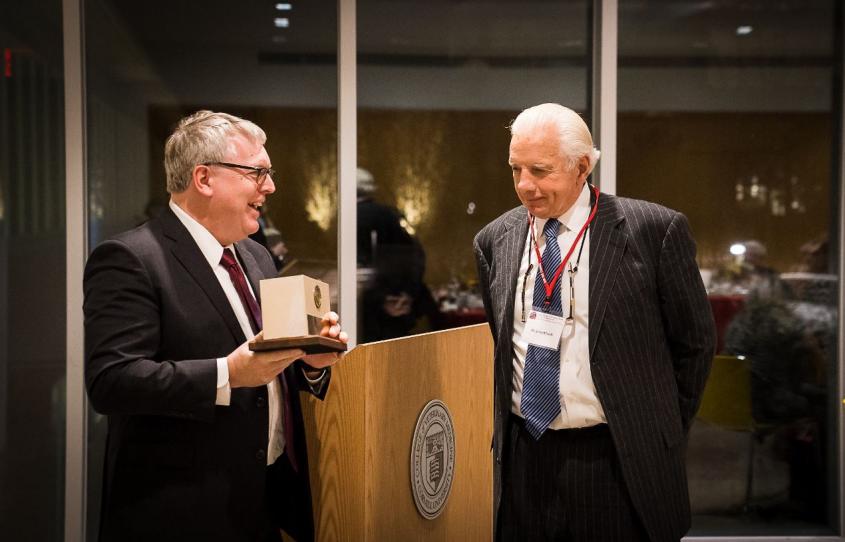 Jerry Bilinski '67, D.V.M.'69 received recognition for his service at the Zweig 40th Anniversary this past October. Photo: Darcy Rose

Jerry Bilinski '67, D.V.M. '69, stepped down as a member of the Board of Trustees at the end of October 2019. He was appointed by former New York State Sen. Joseph Bruno in 2003, and served 16 years, the longest of any alumni of the College of Veterinary Medicine.

"It was an honor to be part of the Board of Trustees," Bilinski said. As a trustee, he worked to help New York politicians understand Cornell's importance. Within the board, he raised awareness about both the value of political relationships and the significance of the College of Veterinary Medicine and the College of Agriculture and Life Sciences at Cornell.

Bilinski, who provided veterinary care for Bruno's horses as his equine veterinarian and advised him on racing and gaming, embraced his role on the board and attended nearly every meeting. Among the many committees he served on, he was most involved with the government relations committee and frequently met with state leadership, including Gov. Andrew Cuomo.

"Not a lot of veterinarians are very politically involved," Bilinski said. "But being involved gives us a chance to make a difference."

During his tenure, Bilinski advocated for, and contributed to, increased communication with state leadership. When he joined the board, many senators, he said, were not aware of all that Cornell provides the state's residents, whether it is advice from Cornell Cooperative Extension or the expertise of highly qualified veterinarians.

"Not everyone agrees that Cornell should be politically involved," Bilinski said. "But these relationships matter because political leaders can't be experts in every subject, and they need guidance from trusted sources when legislative issues arise. Cornell has these experts! Being communicative with politicians is important so we can remind them that Cornell is 'the source' in New York state."

"I'd like to thank Jerry for his years of service and commitment, both to the equine community, and to Cornell, through his volunteerism and generosity," Warnick said.

Bilinski has been an equine veterinarian for more than 40 years and currently owns a 200 horse thoroughbred breeding farm in North Chatham, New York. The property is just a few miles from his birthplace, where his father owned a farm, worked as a cattle dealer, helped run his family's sausage company — and taught Bilinski common sense. Neither of his parents finished grade school. "My seclusion in the back 40 acres probably kept me out of trouble," he joked.

In addition to serving as a trustee, Bilinski and his wife Darlene have been very generous to the College of Veterinary Medicine, establishing two endowed veterinary scholarships and the Jerry and Darlene Bilinski Learning Laboratory.

Supporting Cornell is a family affair, and Cornell gear decorates Bilinski's office. Although his wife Darlene is not an alumna, she is a staunch champion of Cornell and, in his words, "as Red as I could ever be." One of their two daughters graduated from the School of Hotel Administration in 2018.

"Cornell was no doubt an important part of my success as a veterinarian," he said, adding that the day he found out that he was accepted into the College of Veterinary Medicine, he rode his motorcycle down Tower Road, wanting to jump for joy. He estimates that he spent 15 percent of his adult life at Cornell, during a time when he made a lot of important life decisions.

Bilinski explained that he supports the university because it will produce more professionals who will do good work in the world. "Cornell is bigger than all of us," he said. "I give to Cornell so that Cornell can give back to society."