College LVT has Westminster hopes on the horizon 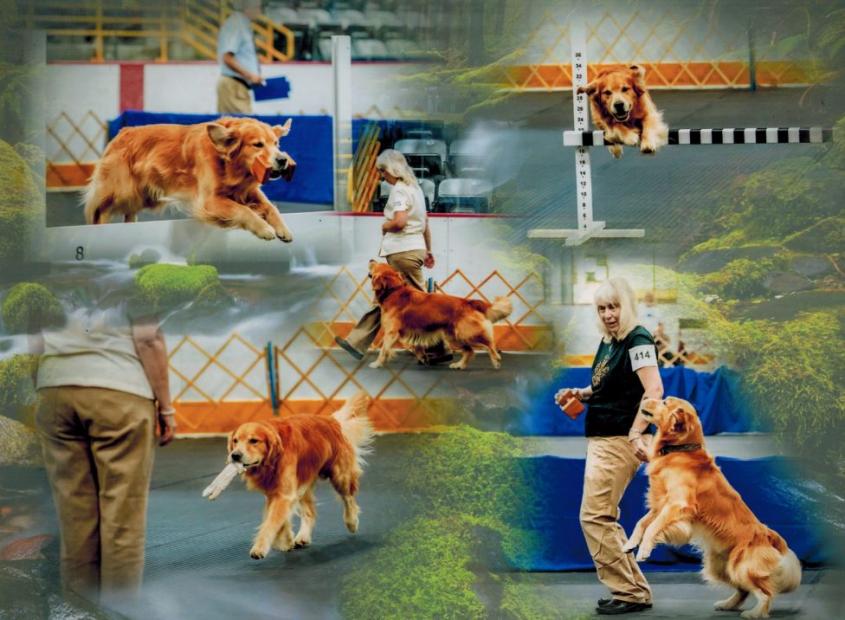 Mitchell and Rook compete at an obedience show in July 2019. Cell phone video and images provided.

While Cornell clinicians will once again be on-site at the Westminster Kennel Club Dog Show providing veterinary care to the canine attendees this year, one of the College of Veterinary Medicine's own may soon be competing in the show herself. Licensed veterinary technician (LVT) Lisa Mitchell was invited to apply for the obedience competition of this year’s show with her golden retriever, Rook.

The New York City show is one of the most famous in the country, put on annually since 1877 by the Westminster Kennel Club and broadcast on television for the past 50 years.

“This is the first time I’ve ever had a dog get invited to Westminster since I started trainings dogs for competition in the late ‘80s,” said Mitchell, who has worked at Cornell since 1982 and splits her time between the Equine Performance Clinic and the Cornell Veterinary Biobank. “Just getting the purple-and-gold letter was very cool.”

While Mitchell and Rook will not attend the show on February 8 to 11 – only 25 of the top 200 dogs invited to the Masters Obedience Championship Competition are ultimately admitted – she considers the invitation alone a recognition of decades of hard work.

Mitchell grew up surrounded by animals on her parents’ dairy farm in Trumansburg, New York. In 1989, she discovered her passion for dog training when she received a puppy bred from her father’s pedigree golden retriever. Mitchell felt right at home with the discipline required in obedience lessons by the Ithaca Dog Training Club, having shown horses in her teens. “I’ve always liked to compete, so I started asking questions, and a couple of people took me under their wing,” she said.

Since then Mitchell has trained, won titles and in some cases earned championships with nearly a dozen dogs in several sports, such as obedience (where dogs follow commands in a precise manner), agility (where dogs are directed through a timed obstacle course) and conformation (where dogs are judged for adherence to breed standards).

But 4.5-year-old Rook has outpaced them all. “He just flew through the levels,” Mitchell said. Over the past year of competitions, the golden retriever has collected 70 points toward the 100 required for the highest obedience title, the Obedience Trial Championship (OTCH). By comparison, her last golden retriever, Brinker, only ever earned six OTCH points and three of 10 “legs” needed for the Utility Dog Excellence title that Rook notched at age three.

“Rook is a culmination of many years of my learning,” Mitchell explained. “And he has the genetic background for doing well; his father’s still competing at age 10. So, when I got him at eight weeks old, I laid out a plan in my head, and it’s really paid off.”

That plan includes several training sessions per week – two at 30 to 45 minutes each in the winter, shorter and more frequent in the summer – in obedience, agility and rally (a course of obedience exercises), as well as up to two weekend-long trials a month throughout the year. Typical exercises at “open” level trials include heeling, staying right by the handler’s side while walking around the ring, retrieving small dumbbells, and – at the higher, “utility” level – identifying objects based on the handler’s scent.

“He’s just an amazing dog – so happy to do what I want him to, time after time,” Mitchell said. “I love the discipline and teaching dogs something, rather than honing their natural instincts as in other sports like scentwork. When I’ve got a dog who’s heeling really well, it’s like dancing, so much fun.”

As for Westminster: “Maybe we’ll get in next year,” Mitchell said. “Rook’s probably going to compete at least until he’s 10, as long as he’s healthy and sound and we’re having fun together.”