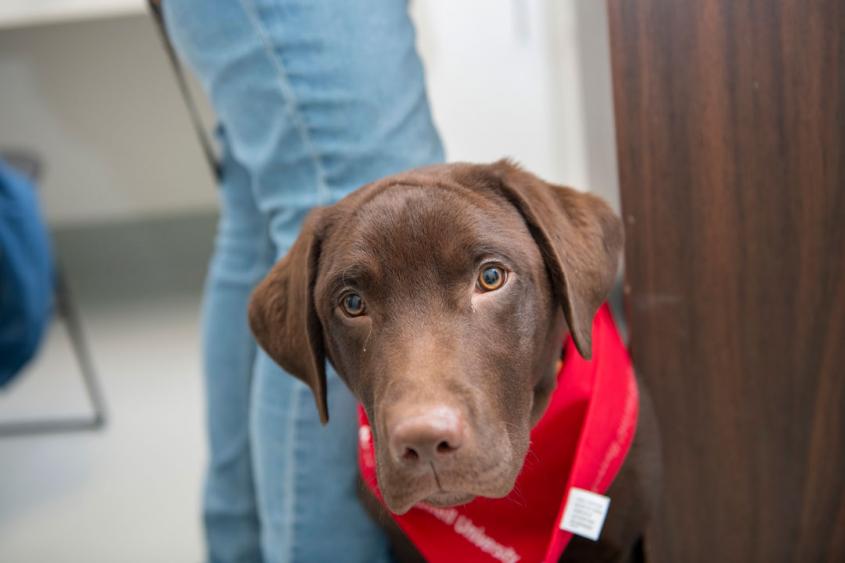 Services in the Cornell University Hospital for Animals worked together to diagnose and repair a liver shunt for Turbo, a young Labrador retriever. Photos by Rachel Philipson.

When a veterinarian saw a rubber band, bread tie and a stone on a young Labrador retriever’s abdominal X-ray, she referred the pup to Cornell University Hospital for Animals (CUHA) for an endoscopy. Soon after the procedure, it became clear the dog, Turbo, had more serious problems than poor taste in food. Ultimately, the Internal Medicine and Small Animal Soft Tissue Services worked together to diagnose and repair a liver shunt. Finn’s Fund, an endowed patient assistance fund, ensured Turbo’s owners could afford to do everything possible for their beloved pet.

“Seeing him pacing and knowing he was in pain broke our hearts,” says Turbo’s owner, Cindy Joslin. “He now plays like a puppy should and is just a joy. The treatment he’s received from Cornell has been a blessing.”

Initially, Turbo began acting strangely at home, pacing, visibly in pain and biting the Joslins more earnestly and angrily than is usual for a four-month-old puppy. His primary veterinarian suspected he was having gastrointestinal problems so ordered the X-rays that revealed all the errant objects the dog had eaten. At home after the endoscopy was performed at Cornell, Turbo began walking around aimlessly, getting stuck in corners and showing other signs of confusion.

“Since he ate bad things before, we thought this time he’d gotten into the wild mushrooms that grow on our property, or some other type of poison,” says Joslin. “We took him to his doctor, who suspected a liver shunt and sent us back to Cornell.”

A fairly rare condition, a liver shunt is an abnormal blood vessel that connects the portal vein to the vena cava. The portal vein directs blood flow from the gut to the liver, and the vena cava directs blood throughout the body and into the heart. By bypassing the liver and sending blood directly from gut to the heart, the shunt reduces the liver’s ability to remove toxins (byproducts of food or bacteria) from the blood. The toxins get to the heart and make the patient behave as if drunk — dazed, lethargic, and confused.

“The symptoms can be especially pronounced after a high-protein meal, since protein creates byproducts that can be toxic, like ammonia,” explains John Loftus, D.V.M. '12, assistant professor of small animal medicine. “Turbo’s tendency to have neurologic episodes like these after eating, then, suggested a shunt.”

Bloodwork that included a complete profile, as well as a Protein-C test, which is a marker of liver function, confirmed the presence of a liver shunt. Doctors then ordered a CT angiogram with contrast medium that would “light up” Turbo’s blood vessels on screen. This made it possible to see the vessel that did not belong in the portal vein.

“Turbo’s shunt was congenital and was a single blood vessel within the liver,” says Loftus. He explains shunts can be treated medically with antibiotics and an oral solution to try to reduce the toxins. However, surgery usually has a better outcome. “We may or may not be able to completely cure Turbo’s shunt, but the goal is to increase the blood flow to the liver so it can do its job better and not sustain more damage.”

This also could result in less medical management with prescriptions and foods, and a better quality of life for both Turbo and his family.

Given the options, Joslin says they chose the surgery. “The doctors carefully explained the procedure, and we decided on surgery because we knew it would help him live a longer life with us,” she says.

In November, the Small Animal Soft Tissue Surgery Service performed interventional surgery (inserting instruments and devices through the veins) to block the stent. “Going through the jugular and the vena cava, we deployed thromboembolic coils to block the blood vessel,” explains Dr. Galina Hayes, small animal soft tissue surgeon at CUHA and the primary clinician on Turbo’s surgery. “We continued to add coils, one at a time, and check Turbo’s pressure until it reached the desired level.” An intravascular stent was then added in the blood vessel adjacent to the shunt to keep the coils in place.

The Joslins made their decision based on love, not affordability, and were grateful when they learned about Finn’s Fund. It would cover half the costs incurred at Cornell, including diagnostics and treatment. Finn’s Fund was established in 2017 in honor of beloved pet Finn, who passed away after years managing a vascular liver abnormality. The fund assists  families whose dogs are facing a vascular liver abnormality, with the intent that they have high-quality care and treatment choices without financial hardship.

“I was so excited to hear that the fund was going to help Turbo gain access to all the treatment options available,” says Christina Fried ’94, Finn’s owner, who established the fund. “Ironically, when Finn was undergoing testing toward a diagnosis, we were hoping it was a liver shunt like Turbo’s, something that could be surgically repaired for a prolonged life.”

Unfortunately, Finn’s liver abnormality was not surgically reparable and most of his liver had been damaged by the disease. “We were fortunate to be able to afford the multiple medications, special diet and repeat hospital visits necessary to maintain a quality of life for Finn for another eight years,” says Fried. “I wanted to start a charity for dogs for whom a good and prolonged life would be possible with the right veterinary care and medications. I didn’t want a family to have to decide between feeding their children and having more, quality time with their pet.”

One of the more unique elements of Finn’s Fund is that it seeks to help in situations where the condition may or may not be curable. “Most charities I approached only provided funding toward a cure. Working with Cornell, my alma mater, I was able to help in as many situations as possible, including those that would require long term care,” says Fried.

“What Finn’s family did was so awesome. We would have gone ahead and paid whatever necessary to do this for Turbo, but I have no idea how we would have come up with the money,” says Joslin. “Finn’s Fund helped us take care of him without having to go further into debt.”

Loftus adds, “Owning a dog with a shunt who is being treated medically can be costly and time-consuming. The fund gives us the ability to offer families all the resources at our disposal, both medical and surgical.”

Of his two-month recheck with the Internal Medicine Service, Loftus says, “Turbo was doing really well. It’s still a little early, but he’s in a really good spot where we’re waiting to see if he’ll do great or exceptional.”