Veterinary Business Roundtable serves up insight and ideas for the profession 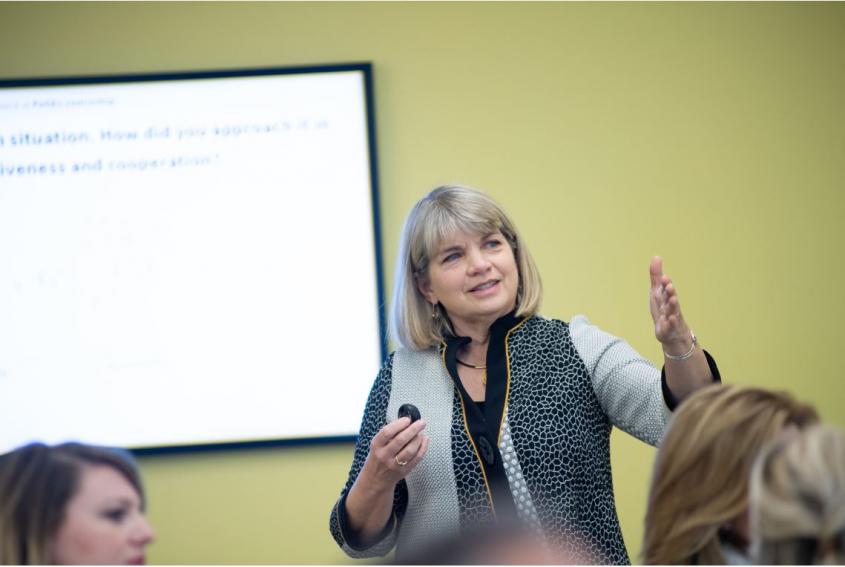 The Center for Veterinary Business and Entrepreneurship (CVBE) at the College of Veterinary Medicine has been gathering momentum since its launch in early 2019.  That momentum was in full force on January 25th when the College held its first Veterinary Business Roundtable, an invite-only event that brought together practice owners, members from industry and academia, alumni and students for discussion and engagement on business and innovation. “The inaugural roundtable event was a wonderful success,” said Jodi Korich, D.V.M. ’97, associate dean for education, “The roundtable brought together an interesting mix of professionals from across the veterinary industry. Participants gained new insights from faculty at the SC Johnson College of Business and the small group format allowed everyone to exchange ideas and learn from one another.”

Each session was designed to foster new ways to think about the veterinary industry by viewing it through the lens of business disciplines. “It really led to some very positive discussions on both the current state of the industry but more importantly, how do we start to partner more and collaborate to improve the future of our focus on animal health,” said Randolph Legg, head of U.S. pet vet business at Boehringer Ingelheim Animal Health.

“You might be saying, ‘Okay, what’s a food and beverage guy doing here talking to vets,” Susskind first said to the group. “I liken doctors and vets to chefs,” Susskind said. “You have a skill set, you have something you’re really good at, and you’re trying to help people.”

This resonated with attendee Donna Manderino, D.V.M. ‘83, medical director at Park Ridge Animal Hospital.  “We are focused on our craft. We may not pay attention to the other details that it takes to run a successful business,” she said. “But there are solutions that can be gained even from other industries.”

Susskind described how customer experience has become even more crucial

over the years, presenting statistics on recent studies that showed more people would discontinue business after a negative experience at an establishment; rate service as the key reason for their brand loyalty; and pay more for a better customer experience. Susskind summed it up: “Service is an important part of your business —and your customers are thinking about that all the time.”

Susskind noted how important it is to manage customer expectations, using Outback Steakhouse as an example; the restaurant aimed to introduce steak to a wider population of consumers, but found that 12% of their steaks were sent back to the kitchen. The founders analyzed every aspect of the business, from the kitchen to the service staff, with no obvious culprit. Finally, they realized that their customers were unfamiliar with what a rare or medium-rare steak looked like and were sending them back to get re-cooked. To solve this, Outback put an infographic on their menus illustrating steaks from rare to well-done. “So, this just helped them basically set expectations,” Susskind said, noting that there may be times when veterinarians need to educate clients about how to use new products and services.

After reviewing other examples of customer service efforts in the restaurant and hospital industries, Susskind opened the discussion up to the participants.

Questions ranged from how much attention to customer satisfaction is too much (Susskind: “There is such a thing as diminishing returns — they have to be happy, but it has to be a profitable happy;”) to how much weight to give a negative response on a survey (“A negative response needs to be examined. Call them and have a five to ten-minute conversation;”) to how to incentivize customer-service attitudes in an academic setting (“Lead by example and make them feel like they’re part of a team.”)

These data and insights from the hospitality industry connected with participants like Hotel School grad Lance Sprinkle ‘93, COO at Encore Vet Group. “I like this idea of really creating expectation in your company for what quality is going to mean for us, and really trying to make it more consistent,” he said. “I want our organization to view negative feedback as a way to fine tune an awesome veterinary hospital.”

Susskind next had attendees discuss examples and ideas of service quality in the veterinary industry.  One guest noted how online veterinary ‘live chat’ software had improved their customers’ satisfaction, while another mentioned how a local practice would light a candle on the mantelpiece to let other guests know if a family on the premises was dealing with an end-of-life situation, which helped set expectations and behaviors for other pet owners in the waiting area.

As the group continued to share thoughts and experiences, they agreed that the veterinary industry was rich with opportunity to innovate the kind of systems and feedback mechanisms that are well-established in the hotel and restaurant industry.

The round table shifted gears from communicating with customers to communicating within one’s organization with Dr. Deborah Streeter’s introduction on negotiation tactics. Streeter addressed right away why focusing on women’s negotiation was important, noting that despite most veterinary students being female, veterinary industry leadership is still mostly male. Streeter argued that the core reason for this lack of representation was negotiation. “Women don’t ask as often as men, and when they do ask they frequently experience a professional penalty for doing so,” Streeter said. “Let’s start with trying to fix that.”

Boehringer Ingelheim’s Randolph Legg appreciated Streeter’s approach to her talk, noting that the data was clear in illustrating the need to empower women towards leadership, but that Streeter “conducted the training in ways that felt inclusive rather than exclusive,” he said.

Streeter’s talk was high-tech and interactive; attendees logged into a polling webpage to anonymously answer questions she posed to the group, such as ‘How comfortable are you with negotiating in a work setting?’ and then would showcase the results – in this case, she segmented them by gender, and demonstrated that the men’s comfort levels were higher (70%) compared to women’s (50%).

Streeter polled the group on what barriers they have with negotiating, which revealed illuminating results — no men felt that they didn’t have enough practice in negotiating, while women mostly didn’t negotiate because they didn’t want to appear greedy or entitled. Streeter went on to detail other gender-based differences, such as women feeling uncomfortable with being paid better, or being more likely to take their first offer, leading to large gaps in success later.  “This accumulation of small differences over the course of one’s career are what matters,” she said.

The data had impact on attendants; “At Encore Vet Group we really try very hard to create a very diverse workplace,” said Sprinkle. “And it was fascinating to learn how we have this unconscious bias that can make it harder for certain people.”

Streeter asked participants to think about other internal factors that affect negotiation, noting how people are raised affects their comfort levels with conflict and discussing money. “Sometimes your roots make you stronger,” said Streeter.  “And sometimes you have to rip them out.”

This struck a chord for Carol Richards, D.V.M. ’07, co-owner at Caring Hands Animal Hospital, who noted that she sees discomfort around money with her fellow veterinarians. “I think we as a profession are undervaluing ourselves,” Richards said.  “We don’t realize that it's not bad to make money as a business. I would love us to stop having that stigma.”

Streeter also delved into the differences in personality types, polling the group on whether they were extroverts or introverts, and next asking each group what bothered them most about the other. Unsurprisingly, introverts found it trying when extroverts talked at them too much, while extroverts found introverts’ silence unnerving.  Streeter noted that recognizing these personality types can help people in negotiations as they train themselves to match the energy of their negotiation partner, and perhaps begin to work “new muscles” in talking more or leaving more space in the conversation.

At the conclusion of the event, participants walked away with tangible ideas to take back to their organizations. “Both speakers offered powerful tools from a negotiation and leadership perspective,” Cutler Tew said after the sessions. “At IDEXX, enhancing our structure to really encourage mentorship and sponsorship to high performers in our organization can help us become stronger.”