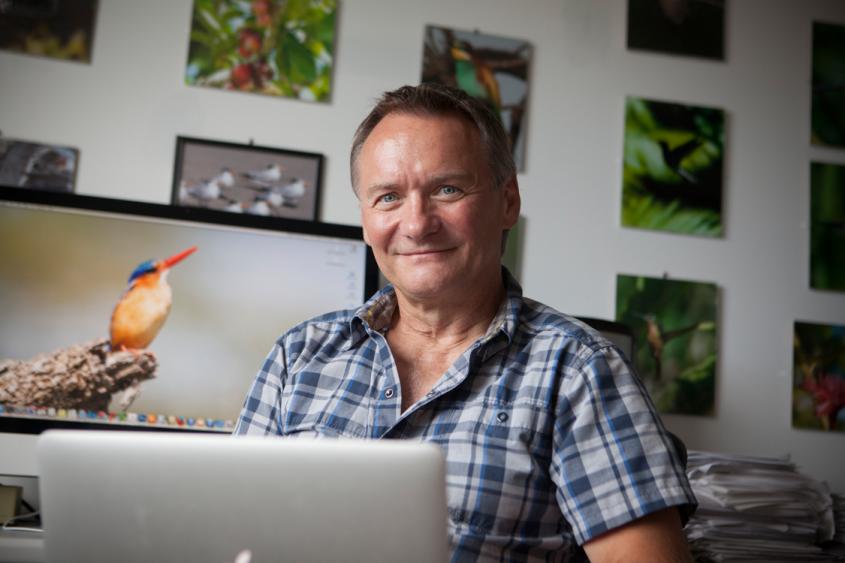 Dr. David Russell, the William Kaplan Professor of Infection Biology in the Department of Microbiology and Immunology in the Cornell College of Veterinary Medicine, has used a cutting-edge method for illuminating the interaction between the bacteria that cause tuberculosis and two different kinds of host cells.

The paper, published in Cell Reports on Jan. 14, describes how Russell’s team exploited dual RNA-sequencing analysis to see what metabolic dances take place in vivo between Mycobacterium tuberculosis (Mtb) and two types of immune cells it infects. The study provides a new technique for examining how specific cell types and pathogens interact in vivo. “It’s never been done before for any intracellular pathogen from an active infection,” said Russell.

In previous studies conducted in lab dishes, Russell has shown that Mycobacterium tuberculosis grow easily in alveolar macrophages — the  immune cells that stem from and remain in the lungs — while the same bacteria struggle to thrive in interstitial macrophages, immune cells that are recruited to the lungs from the blood. They found that alveolar macrophage cells consume lots of lipids, Mycobacteria’s preferred energy source, while interstitial macrophages use glucose and thus ‘starve’ their bacterial inhabitants.

Previous studies had focused on cells in culture that denied this in vivo complexity. Thus, Russell and his team wanted to know how Mtb interacted with the alveolar and interstitial macrophages that could only be studied during in vivo infection. They gathered lung tissue samples from Mycobacteria-infected mice, and using a chemical tagging system developed previously, separated the interstitial macrophages from the alveolar macrophages to pick out the unique cellular programing on both host and pathogen.

“Up until five years ago, everyone thought these macrophages were all the same and all came from the blood,” Russell said. “But these host cells are really biologically distinct entities and we needed to be able to interrogate the two populations separately.”

“Up until five years ago, everyone thought these macrophages were all the same and all came from the blood. But these host cells are really biologically distinct entities and we needed to be able to interrogate the two populations separately.”

After separating the two macrophage types, Davide Pisu from the Russell lab applied a cutting-edge approach, dual RNA-seq. The technique requires disruption of host and bacterial cells to map relative abundance of mRNA. However, analyzing bacterial transcripts in a eukaryote tissue sample is daunting; the host’s RNA vastly outnumbers bacterial RNA, making it difficult to get sufficient usable data on the pathogen. “It is really like trying to find a needle in a haystack,” Russell said.

However, Pisu knew that Mycobacterium tuberculosis would be a special exception to this problem. “These bacteria don’t lyse with the rest of the host cell,” Russell said, explaining that their membranes are resistant to those reagents used to dissolve most cell membranes. This allowed Russell’s team to separate host and bacterial RNA for analysis. After harvesting the host cell mRNA, Russell’s lab disrupted the Mtb bacilli with beads. The research team then recombined host at bacterial RNA at a defined ratio to allow capture and sequencing of sufficient numbers of both bacterial and host transcripts.

With this research platform in place, the Russell lab was now able to evaluate how the host and pathogen in the two different types of macrophages expressed their genes in vivo.

Russell and colleagues wanted to assess how effective this approach was in interrogation of the host/pathogen interface — so they investigated known nutritional dependence, namely iron and fatty acid metabolism.

Knowing that Mycobacterium need fatty acids and iron to thrive in vitro, Russell’s lab probed these networks in their dual RNA-seq datasets to see how this was enacted in vivo. Sure enough, the genetic read out showed that interstitial macrophages expressed genes for limiting iron and fatty acids, and the bacteria in these host cells expressed genes that evidenced their malnourished status.

In contrast, infected alveolar macrophages expressed genes that indicated enhanced lipid metabolism and iron levels — and the genetic read out from their bacterial inhabitants proved the bugs had ready access to these two key nutrients.

The data was the first direct real-time demonstration of how differently the two macrophages behave during a tuberculosis infection in the body. “When I saw the data, it was seriously cool,” Russell said. “It confirmed what we already knew in theory, but we were able to see it play out in vivo in an almost real-time interaction. It allowed us to validate this new technique as a discovery platform, while also bringing the whole thing together into a much more holistic picture of how the different host conditions and bacterial responses interplay in an in vivo situation.”