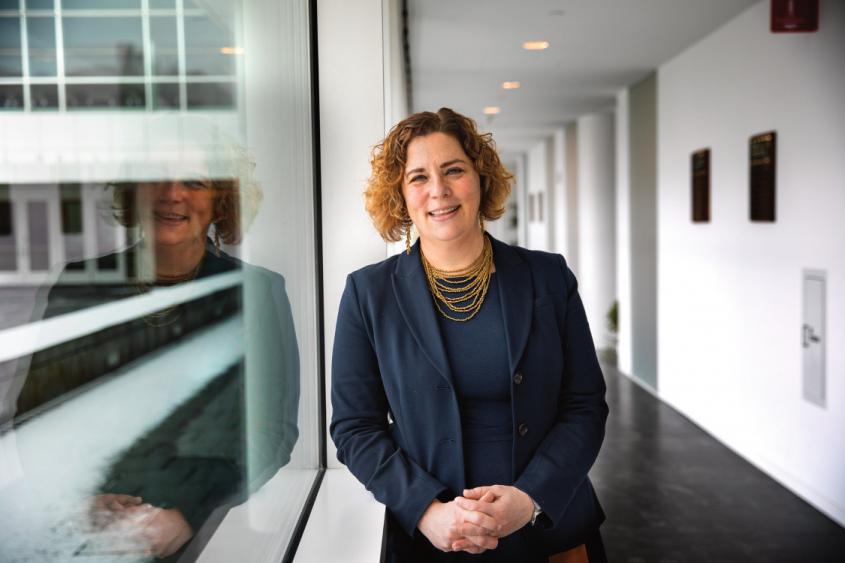 Dr. Paula Cohen and her team are tackling male contraception, an elusive goal for many reproductive scientists due to many logistical issues around sperm production. Photo: Lindsay France/Cornell

Most birth control options rely on women to manage, but promising Cornell research from the lab of Paula Cohen may be changing the game by tackling male contraception.

Cohen, professor of genetics in the College of Veterinary Medicine and associate vice provost for life sciences, has secured a $1 million Grand Challenges Explorations Phase II grant from the Bill & Melinda Gates Foundation for her ongoing project, “The Spermatogonia-to-Meiosis Transition as a Novel Contraceptive Target.”

Cohen received Phase I funding for this work in 2017; typically, only a fraction of Phase I grants show enough promise to receive Phase II funding.

Cohen and her team are tackling male contraception, an elusive goal for many reproductive scientists due to many logistical issues around sperm production. However, Cohen chose to attack the problem at the brink of meiosis – a stage of sperm production no one else had examined.

“I thought, wouldn’t it be amazing if we knew what genes turned meiosis on?” Cohen said. “We could dampen those genes – turn them off – and we’d effectively have a little light switch for controlling male fertility.”

To become sperm, progenitor cells known as spermatogonia must go through meiosis. All cells that successfully undergo meiosis then pass through the blood-testis barrier, one of the tightest blood-tissue barriers in the body. This keeps bloodborne factors, as well as potential contraceptives, from accessing the meiotic and post-meiotic cells.

“So if you want to target sperm production for contraceptive purposes,” Cohen said, “you have to get the drug delivered prior to meiotic entry.”

In addition, meiosis itself acts as a natural “quality assurance” system: If an abnormal cell tries to go through meiosis, the cell’s natural mechanisms would likely destroy it. “It makes sense that we could hijack this system for contraception,” Cohen said.

If the right drug was found, all sperm development would be paused before meiosis and could resume once the drug was taken away. This drug would be a nonhormonal therapeutic, less likely to affect men’s moods or systemic health than hormone-driven contraceptives have been known to do to women.

In Phase I of her grant, Cohen showed that she could get spermatagonia to enter meiosis, establishing a robust testing platform for new drugs.

To find a drug that will do just that takes some “really risky” new technologies – exactly the kind of investigation the Gates Foundation is looking for, she said.

“This is the beauty of the Gates Foundation grant,” Cohen said. “They said, ‘Tell us where you’re going with this, tell us what the problems are, and where you see the solutions.’”

Then, using the testing platform they developed in Phase I, Cohen and her team will induce these CRISPR-altered cells to go into meiosis. Those that fail to do so should hold the “off-switch” genes that Cohen is looking for, which she will pinpoint and categorize. Once several target genes are found – Cohen hopes for roughly 20 – they will share those targets with the larger scientific community to enable broad testing and investigation for potential drugs.

“The idea,” she said, “is to take a crowdsourcing approach.”

Since the end goal is to have a safe and reversible drug, Cohen’s team must make sure, through testing on animal models, that these target genes can shut off and back on again without causing any negative side effects.