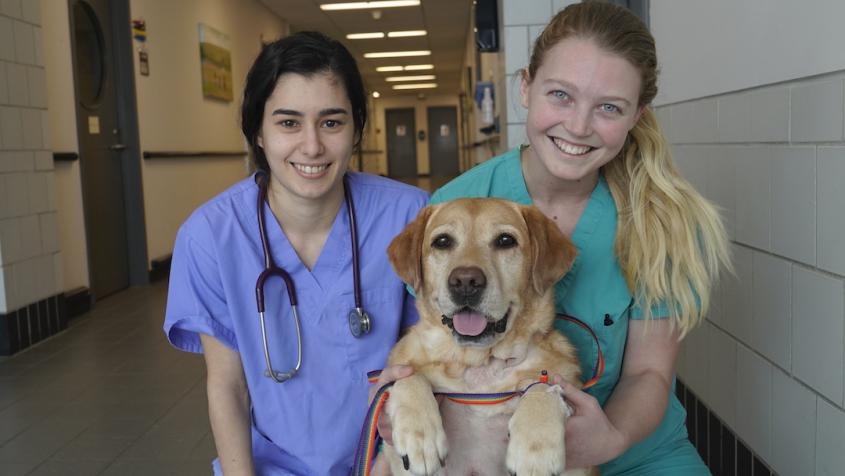 Imagine the time it takes to brew some coffee, answer an email or take out the trash — approximately five minutes, maybe less. In that amount of time, Cornell veterinarians and human medicine physicians opened a canine patient’s heart to remove a tumor blocking her right ventricle.

The dog, a seven-year-old yellow Labrador retriever named Lucy, started fainting regularly late last year. Her owners, the Baginski family, were concerned by this unusual behavior. “There were a few times when she became disoriented, and others when she’d get excited while playing but then fall to the floor,” said David Baginski.

In their search for answers, the Baginskis were referred to the Cornell University College of Veterinary Medicine (CVM). There, the cardiologists carried out a 3D echocardiogram that showcased the tumor.

“Lucy was periodically collapsing and essentially blacking out because of her heart’s failure to oxygenate,” said Dr. Galina Hayes, assistant professor of small animal surgery. “The mass was blocking the outflow of blood. If you imagine the ventricle is like a pump, it would be as if something got caught in the hose.”

The veterinarians were concerned that even if the cancer itself wasn’t terminal, the effects of the tumor could be. The Baginskis agreed, worried that one day Lucy wouldn’t wake up from a faint. “At first we thought she was just out of shape,” Baginski said. “We’d have to encourage her to keep up on walks, but now we know it was a circulation problem and she was getting tired.”

Hayes conferred with colleagues at the Cornell University Hospital for Animals on the best approach to remove the mass. “I’ve never seen a case like this in my career,” Hayes said. “There is maybe a total of three such reported cases in veterinary literature.”

One of the experts Hayes brought in was Dr. Luis Campoy, associate clinical professor and section chief of anesthesiology and pain medicine.

“I was on the phone with Dr. Hayes, and we knew we had to do something quickly, otherwise Lucy might not survive,” said Campoy. “If we waited too long to decide what to do she could be gone.”

“We knew this would be a high-risk procedure, riskier than it would be with a human patient because it was not possible to use cardiopulmonary bypass for Lucy,” said Walline, who completed a fellowship in pediatric anesthesia and is currently completing another in adult cardiothoracic anesthesia, two fields that align surprisingly well with veterinary medicine and this case in particular. “The patient profiles are similar in pediatric and veterinary anesthesia — you are treating a patient, typically smaller in size than an adult, who is non-verbal.”

Open-heart surgeries are more common in human patients, largely due to human hospitals’ access to cardiopulmonary bypass machines, which can redirect blood flow for an extended period of time. Most animal hospitals lack this technology, Cornell’s included, so Lucy’s care team was left with one option: open-heart surgery without the safety net of a cardiopulmonary bypass machine.

The surgeons would have to make the procedure exceptionally short, since the amount of time a body can survive and recover when the heart is not functioning is limited. “At maximum, it’s about four minutes,” Hayes said.

“We were told that it was about a 50/50 chance of Lucy surviving,” Baginski said.

The surgical team had a four-minute window to stop the blood flow into the heart, make the incision to remove the mass, close the ventricular wall and release the blood so it could flow again. It took an array of experts to make sure that everything was timed impeccably.

“It had to happen like clockwork,” Campoy said. “To make a procedure like this a success, everyone has to execute their roles perfectly at the perfect time, even more than usual.”

“Someone called a countdown every 30 seconds once we occluded the vessels,” said Sara Cantini, a fourth-year veterinary student who observed the surgery. “If the procedure lasts longer than four minutes, she could have permanent damage due to prolonged decrease in oxygen supply.”

In four minutes, surgeons removed approximately 90 percent of the mass threatening Lucy’s heart. Though the most critical moments of the procedure took place during those four minutes, the complete procedure lasted approximately five hours, further highlighting the preparation and coordination necessary to execute the most crucial step. She spent the first night after surgery in the intensive care unit, and three days later, once she was deemed stable, Lucy was able to go home.

On the road to recovery

After her operation, Lucy stopped fainting every day and quickly returned to her former self. “When we go out for walks today, she never tires — she’s back to the way she was two or even three years ago,” Baginski said.

Campoy noted how multiple services, including soft tissue surgery, anesthesia, cardiology and critical care helped Lucy pull through: “Everyone mobilized and accomplished this on top of their everyday duties.”

Cornell tested the mass and determined Lucy had ectopic thyroid carcinoma. In this case she is lucky: A targeted therapy that has few side effects and minimal risk can remove the remaining 10 percent of the tumor.

There are few animal hospitals in the country that can perform this procedure, and if Cornell had the equipment to perform cardiac bypass, more cases could be safely treated and with greater control, said Hayes.

While Lucy may now have a lengthy scar down her chest, the Baginskis are glad she has regained her quality of life — returning to her favorite pastimes of swimming and greeting the neighbors. In March, before the COVID-19 pandemic hit the U.S. in full force, they were able to travel to the University of Missouri for the specific treatment Lucy needs to fight ectopic thyroid carcinoma. She’s now making a full recovery and has had no further fainting episodes.

“I can’t overemphasize how wonderfully we were treated at Cornell,” Baginski said. “They helped us through the tough decisions — the doctors and staff and students, everyone.” 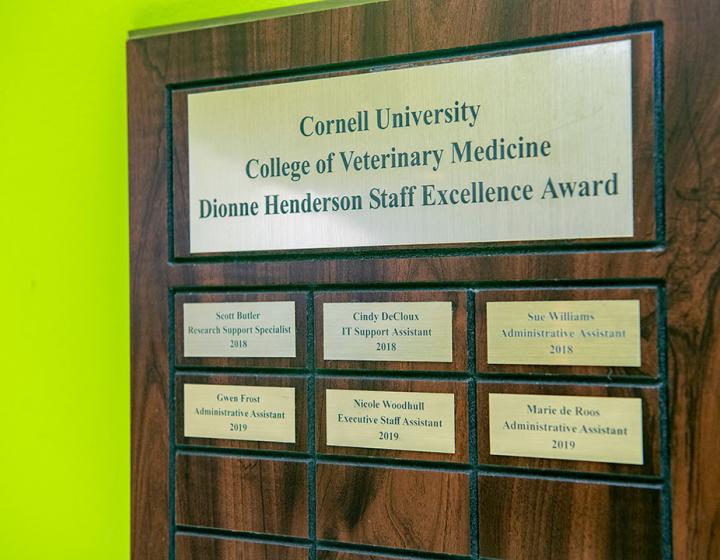