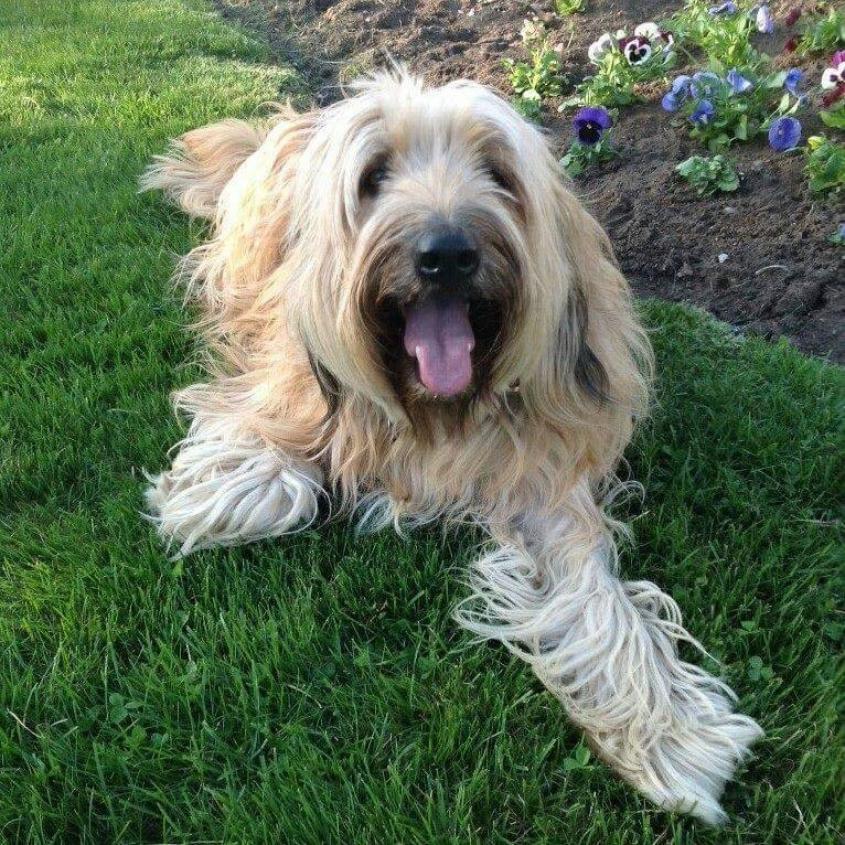 Buddy has seen a remarkable recovery after participating in the clinical trial at Cornell.

Buddy was always a fun-loving dog full of energy. But suddenly, two years ago, the briard began to change. “Out of the blue he started having serious issues when going to the bathroom and would sleep all the time,” says Buddy’s owner, Chris Hein of Saratoga Springs, New York. “We could not figure out what was wrong with him.” Finally, Pamela Reppert ’78, D.V.M. ’86, the family’s veterinarian at the Saratoga Springs Veterinary Hospital, referred the now 13-year-old rescue dog to the Cornell University Hospital for Animals (CUHA).

There, Buddy became one of three dozen dogs thus far to participate in a study on treating persistent gastrointestinal problems (or chronic enteropathy in veterinary speak), with dietary changes. The results so far from the trial have been remarkable, with patients returning to healthy weights and regaining glossy coats after being nearly hairless.

“We used to biopsy most dogs like these, and we’d find they would typically have a form of inflammatory bowel disease (IBD) called ‘lymphocytic plasmacytic enteritis’ and put them on a diet,” says Kenneth Simpson, professor in CVM’s department of clinical sciences and lead investigator for the study. In past studies, up to 80 percent of dogs with lymphocytic IBD responded well to changes in the food they ate, making dietary interventions one of the first lines of treatment before more aggressive measures such as biopsies come into play.

Veterinarians commonly prescribe switching to foods that are more easily digestible or lack problematic ingredients, particularly meat-associated proteins that are thought to

“But no one really knows why or how these diets work or why the original diet caused clinical signs,” Simpson says. “We don’t know what the optimal way to manage those dogs is.” As a result, patients may undergo a whole slew of best-guess treatments as owners and veterinarians try to give them relief.

The Cornell study, Simpson hopes, will bring scientific rigor and more clarity to the process of helping such dogs — including Gabby, a seven-year-old, long-haired miniature dachshund who has suffered from colitis for most of her life. “It’s been difficult for me to see this sweet little pup sick, limp, and listless,” says owner Judith Donohue of Baldwinsville, New York. “In addition, trying and failing with numerous prescription diets and medication has been frustrating.”

Since the study began in early 2018, clinical trials coordinator Carol Frederick has randomly assigned eligible canine participants — recruited from the animal hospital and outside referring veterinarians — into three groups: two receiving hydrolyzed protein diets, and one control group with a high-quality maintenance, mixed-protein diet that is different from what the dogs have previously eaten. All food in the trial contains the same balance of carbohydrates, protein and fat and is provided to the owners for free by the study’s sponsor, pet food company Farmina.

A fourth group consists of more severe cases such as Buddy, who suffer from a more severe disease known as protein-losing enteropathy. Despite in-depth investigations – including endoscopy and biopsy – and treatments with steroids, antibiotics, diets and various medications, the prognosis for these dogs is typically grim: some 50 percent succumb to the disease. Evaluating the effect of diet in these dogs is problematic, as many do not want to eat the prescribed food. For Cornell’s clinical trial, the dogs in this group are randomized to receive either of the two hydrolyzed diets, with the primary endpoint being interest in eating the new diet and weight gain.

“If an animal in any of the groups fails to respond after two weeks, it can be crossed over to receive another diet, so it receives sequential therapy,” says Simpson, who, like the owners, is kept in the dark about which dog is in which group for the duration of the trials. Once a dog is responding well to a given diet, it stays on for at least three months, ideally six or more to see if any changes are maintained.

Those changes so far have been positive, even dramatic, for many of the dogs, including Gabby. Since the beginning of the study, the dachshund has suffered only a couple of bouts of bloody vomit or stool — previously an almost daily occurrence — and she has more energy. “Feeding is much easier since I don’t have to hide antibiotic powder in her food anymore,” Donohue reports.

Buddy, too, despite his low protein levels, has noticeably improved: his stools are nearly consistently solid, he rarely has gas, and he has regained 25 pounds. “He has been much more comfortable and less restless,” says Hein, who no longer gets up every night to let his dog use the bathroom. “He’s almost completely back to his normal self.”

Simpson, while pleased, is a bit surprised at the preliminary results (which have not yet undergone official analysis). “Conventional wisdom would suggest that the hydrolyzed diets would do better and dogs on the intact mixed-protein maintenance diets would fail to respond,” he explains. Yet, at three months, almost all dogs, independent of group, have had positive responses, which means the placebo group is performing equally well.

“The bottom line is, this is the gold standard type of clinical trial, because it’s placebo-controlled, blinded, and cross-over, and the results to date suggest that we may not know as much as we thought we knew about dietary-driven food disease in dogs,” says Simpson. “I think the owners and Farmina are very brave and forward-thinking to support the approach used in this trial; many owners and companies don’t like the concept of using a placebo and the perceived uncertainties associated with randomization and blinded analysis.”

Why changing diets has such a dramatic effect on dogs with chronic gastrointestinal disease remains unclear. Simpson hypothesizes that “while we are still in the dark about what’s driving adverse reactions to food in dogs, the positive responses to a high-quality, intact mixed-protein-source diet suggest they are not a simple allergic response to intact protein. Perhaps non-protein ingredients or additives may be causing adverse reactions.”

Simpson hopes that in-depth analyses of the participants’ gut bacteria (microbiome) and metabolism (metabolome) will provide additional insights, such as biomarkers, and how they can be used to improve diagnosis and therapy. “Chronic diet-responsive enteropathy is one of the most common diseases we see,” he says. “Once we’ve analyzed the evidence thoroughly, I hope we’ll be able to make rational recommendations. That’s very heartening.”