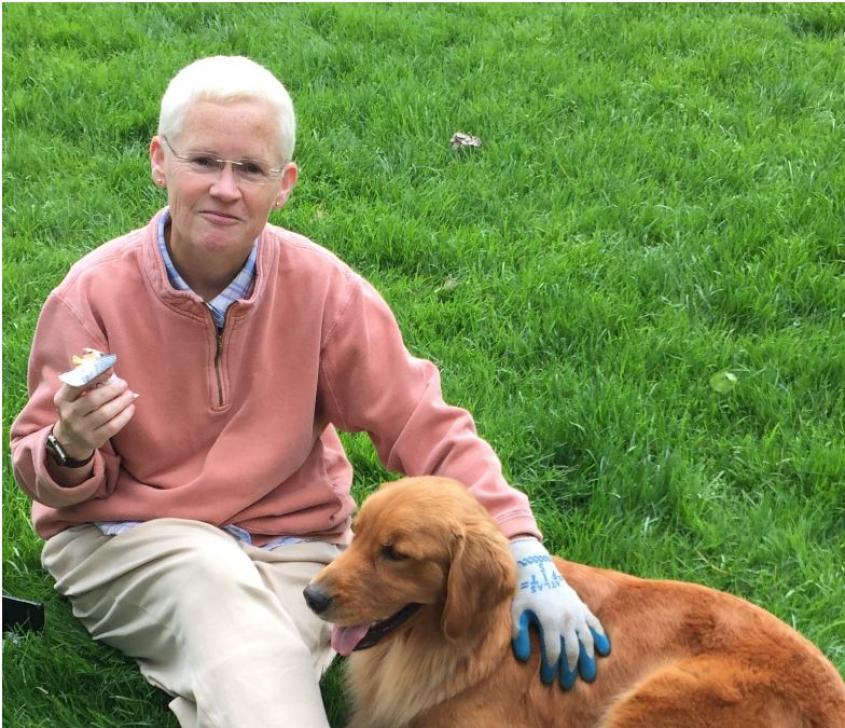 Like many, Cynthia Suprenant has a vested interest in the veterinary profession at Cornell: one that provides fulfilling, accessible education to anyone with the aptitude and desire to learn, and which produces practitioners who can provide equitable access to first-class care. “It would be ideal for each veterinarian to have enough time to fully absorb the latest scientific knowledge and to educate their clients about their pets, while at the same time, keeping veterinary services affordable,” she says. “People without a lot of income deserve the love and companionship of pets, too, and we all know that pets don’t care about material wealth.”

Although Suprenant is not herself a Cornell alumna, she says she wishes all veterinarians were able to practice like her own local, Cornell-trained graduates. Unfortunately, the pressures of student debt have made it difficult for many veterinarians to practice this way. With new Cornell veterinary graduates shouldering a median of $170,000 in debt, many are forced to make career choices based on financial priorities.

“It must be so hard for a student to get to the end of an important and unavoidably expensive education and be forced to make career decisions based on finances alone,” says Suprenant. “That initial choice, based on indebtedness, may set the path for their entire career,” she adds.

These pressures can also steer promising graduates who might otherwise pursue additional study and a career in veterinary teaching and advanced research away from those choices because of the initial years of low earnings in academia. This not only drives a looming shortage of veterinary educators, but also drains the field of much needed diversity.

Thus, Suprenant established the PLK Scholarship, which stands for “Peace, Love and Kindness.” The endowed fund, as Suprenant describes it, intends to “lighten the burden on recipient students so they can pursue their veterinary education — a medical practice grounded in compassion — in peace, and with love and kindness.”

The inspiration for the scholarship and its name came from Suprenant’s friend, Anne Pole, who has since passed away. “She once sent me a meme that read, ‘Kindness: The stuff is free. Sprinkle it everywhere.’ It stuck with me.”

Suprenant is also deeply inspired by her grandmother, who raised her 12 children on the scarce wages she made at a sewing factory. After accounting for all her monthly bills, “she would take whatever amount she’d have left over, and send that money to charity,” says Suprenant. “She would spend it all down to zero. She felt she had all she needed — a roof over her head and a garden. She didn’t need more than that.”

Suprenant is also guided by her Catholic faith. “I was brought up with the saying, ‘faith, without works, is dead’,” she says.

Suprenant hopes that the fund’s broad directive will help in all kinds of ways. Since she started the PLK scholarship a year ago, it has already helped five CVM students.

One recipient, Shalini Radhakrishnan, D.V.M. ’22, has used the scholarship money to fund some of her tuition costs. “As veterinary students we have committed to a wonderful, caring and thought-provoking career. But it also comes with the financial burden of paying for school, living expenses and a future burdened with student loans,” she says. “The PLK Scholarship definitely made a difference in my life by easing the financial burden somewhat. Instead of focusing on the ‘how to finance my dreams’ bit, I am able to focus on the ‘let's make my dreams come true’ bit of veterinary school.”

Radhakrishnan hopes to eventually own her own small animal practice and to also give back to the veterinary community through mentoring students and perhaps paying it forward through establishing her own scholarship someday.

“My vision is that it can provide just a little bit of help to a student when they need it most,” she says. “Sometimes there’s just a unique circumstance where having some extra money can make a big difference.”

Fourth-year student Lili Becktell, D.V.M. ’21, has also benefited from Suprenant’s gift. “It enabled me to free up personal funds for a new laptop for clinics, which has been a godsend,” she says. The funds also helped Becktell attend a trip to the racetrack in Saratoga Springs, New York, with her fellow classmates. “While I’ve always been a fan of thoroughbreds, this was my first time experiencing them in their full athletic glory. As a future equine vet, it was so inspiring!”

Becktell aims to pursue equine medicine once she graduates. “I love the feeling of connecting and supporting humanity in its quest to become ever closer to animals,” she says. “It means so much to know that out in the world, there are people as devoted to the future of our equine friends as I am, and that those same people wish me well and want me to succeed.”

Suprenant knows how finances can affect a student’s educational experience on a personal level: She worked constantly during her undergraduate years in a wide range of positions — from staffing dining halls to providing first-aid care at hockey games. “There were nights when people were going to hear someone speak on campus, and I couldn’t go because I had to work,” she says. “I want people to be able to soak in the education when they have the chance.”

Indeed, Suprenant hopes her gift will inspire others to give to make veterinary medicine education to everyone. “I believe it’s very important to give,” she says. “Right now, it’s the most important time to do so in my lifetime.”