‘One Health’ a key focus of COVID-19 Summit 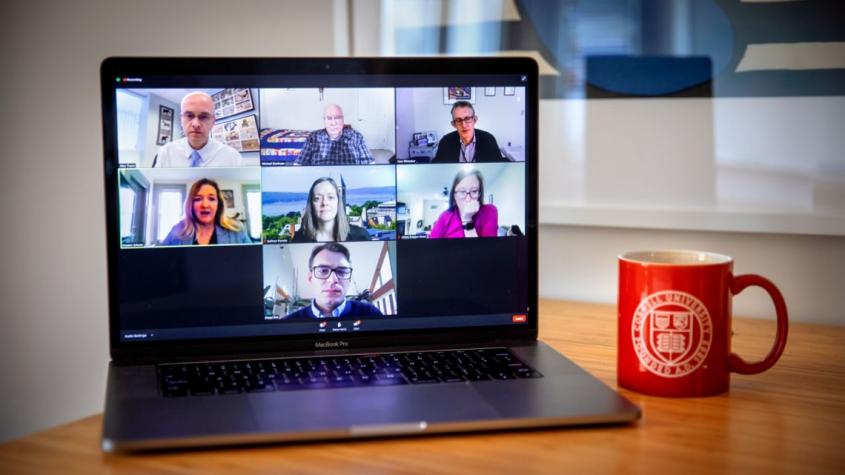 The Centers for Disease Control and Prevention define “One Health” as an approach “that recognizes that the health of people is closely connected to the health of animals and our shared environment.”

It is an approach perfectly suited to tackling the COVID-19 pandemic, the most serious public health crisis in recent history, Cornell researchers said during the university’s COVID-19 Summit, a virtual event Nov. 4-5.

“People have known for literally thousands of years that the health of humans depends on the health of the environment,” said Dr. Alex Travis, professor of reproductive biology in the College of Veterinary Medicine (CVM) and director of the Cornell University Master of Public Health Program.

Travis spoke during the “One Health Perspectives” panel discussion on day 2 of the summit, which brought together SARS-CoV-2 researchers from Cornell’s Ithaca and New York City campuses, including Weill Cornell Medicine and Cornell Tech. The event was designed to share research and promote collaborations across colleges, campuses and disciplines to advance COVID-19 research.

The summit was broken up into seven sessions:

In the One Health Perspectives session, Dr. Gary Whittaker, professor of virology at CVM and an expert on coronaviruses, traced the lineages of previous coronavirus epidemics – notably SARS and Middle East Respiratory Syndrome, or MERS – and the transfer of COVID-19 from bats to humans. He noted that while coronaviruses infect a range of species, bats act as a reservoir for many of them.

Whittaker noted that humans have since infected cats with SARS-Cov-2, the virus that causes COVID-19, and research on cats could offer insights into how the virus behaves in humans.

The lab of Dr. Diego Diel, associate professor of population medicine and diagnostic sciences in CVM, has studied tigers and lions in the Bronx Zoo infected with SARS-CoV-2 by humans. He is now surveying which animal species are susceptible to the virus, given the potential role animals play on the virus’s epidemiology, he said.

According to Dr. Michael Stanhope, professor of population medicine and diagnostic sciences at CVM, coronavirus spillover from animals “has caused three major epidemics in the last two decades, and … this is going to happen again.” At the same time, he said, COVID-19 animal reservoirs in the U.S. are poorly understood; he has a multidisciplinary grant proposal under review at the National Institutes of Health to better understand coronavirus infection dynamics between species.

“Our goal is to identify the [COVID] risk potential of wildlife species in the Northeast, and for putative, high-level-risk species from the world at large,” said Stanhope, who hopes to predict sources of transfer between species in order to respond to, control or prevent any future outbreaks.

Dr. Kathryn Fiorella, assistant professor of population medicine and diagnostic sciences at CVM, said that while disease spillover from wildlife to humans has concerned scientists, “less attention has been given ... to how human health then feeds back to affect the environment,” setting in motion feedback cycles that compound negative consequences for both human and environmental health.

A case study in a Kenyan fishing community revealed that when fishers were ill, they were more likely to engage in illegal and destructive fishing practices than when they were healthy, she said. During the COVID-19 pandemic, Fiorella’s research has shown that stay-at-home measures have led to less fishing, fewer trips to fish markets and more reliance on dried fish that can be stored and less desirable species, creating potential food security concerns. Therefore, she said, governments and institutions should create structures that strengthen access to diverse resources.

“It’s safe to say that humans have become the reservoir and have spread the virus globally,” she said. “Wildlife are often portrayed as the villain in these scenarios when we talk about where the disease came from, and it’s actually human activities and travel that spread the virus.”

She said her future work will assess risks of humans infecting susceptible North American wildlife, which could in turn carry the virus in the long term. She stressed the importance of developing guidelines to prevent human-to-animal spread.

Dr. Oliver Gao, professor of civil and environmental engineering in the College of Engineering, has developed computer models to reveal how air pollution in cities have fallen due to less commuting during the COVID-19 pandemic. But as places like New York City reopen, he said, we can expect more people to avoid public transit and drive, thereby driving emissions rates even higher.

His models show that telecommuting, electric transportation and staggering daily start-and-stop times for businesses can reduce overall emissions, he said.

The summit concluded with a brainstorming and discussion forum, which included opportunities for groups of Cornell researchers to network and develop new collaborations.

-By Krishna Ramanujan
This story originally appeared in the Cornell Chronicle