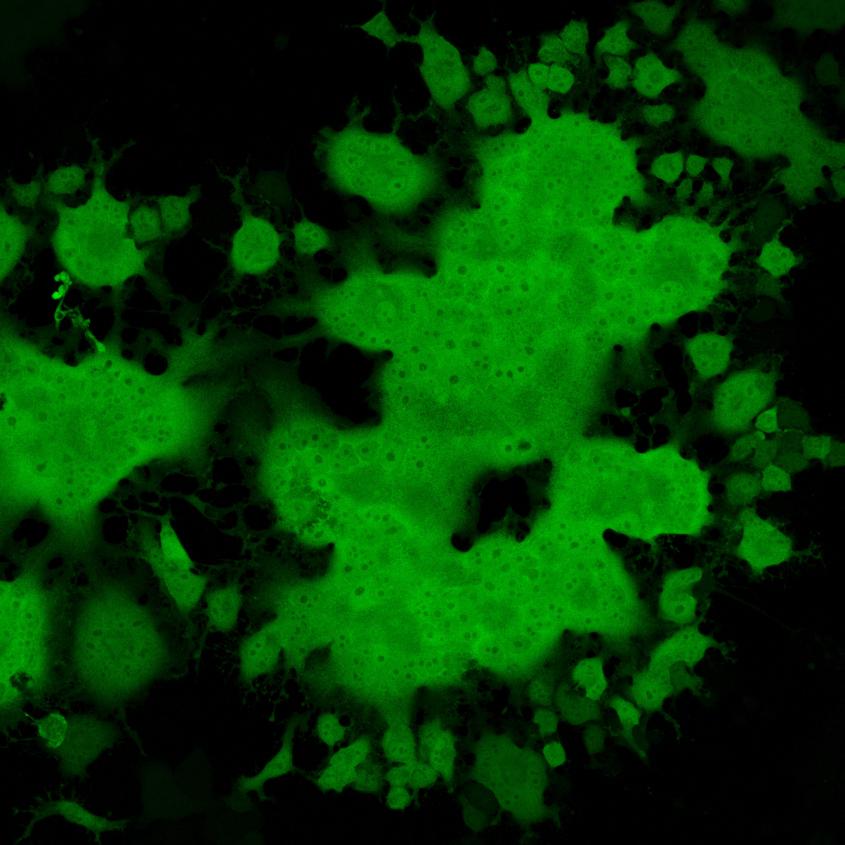 The new reporter cell enables scientists to directly study a single patient-derived infected cell and the virion particles within it, a level of detail that until now had not been available to HIV research. Photo: David Gludish.

HIV has gone from a death sentence to a mostly manageable condition — however, a true cure for the disease has remained stubbornly elusive, leaving patients reliant on lifelong pharmaceutical regimens. Hope for a permanent solution may now be in sight thanks to the researchers at the Cornell University College of Veterinary Medicine. In a recent paper published in Scientific Reports, scientists describe their novel technology to study viruses directly in their host cells, opening the door to finding a functional cure for HIV — and a possible tool in the fight against coronavirus.

“Over the last three decades of HIV research, scientists have succeeded in reducing the HIV levels in patients’ blood to prevent transmisison of the virus,” says David Gludish, Ph.D. '18, D.V.M. '20, a post-doctoral associate in Dr. David Russell’s group. “Past research has produced highly effective anti-retroviral drugs, but these current treatments are not cures. If you pull patients off of treatment, even if they’ve been on it for decades, the virus will rebound within a week or two to the same strength that it was before they began treatment.”

This stubbornness of the disease is thanks to HIV’s ability to hide out in the body. “It is increasingly apparent that what virus levels we see in the blood is just the tip of the iceberg,” says Gludish. “What you find in blood is the spillover of the HIV that is present in the tissues.”

To find a cure, scientists need access to the true source of the problem — infected tissue. “The cells to beat are the so-called viral reservoirs,” Gludish says. But very little is known about tissue reservoirs, because getting access to human tissue for this purpose is difficult, and samples are rare.

The Russell research group traditionally focused on tuberculosis research, collaborating with doctors in Malawi who routinely gather airway cell samples from TB patients through a lung wash process called bronchoalveolar lavage. But they found that almost all of these patients also had HIV. The lavage samples provided the researchers with a supply of lung macrophages that were not blood-borne, but were potential viral reservoir cells. “That’s why we started studying HIV,” Gludish explains. “We had incredibly valuable lavage samples from HIV-infected patients, and began studying them in hopes to find the key to unlocking the cure for the disease.”

Most HIV studies work with blood samples, which are convenient to collect; HIV reporter cells react — either by glowing or turning blue — when they come into contact with HIV-infected blood-borne immune cells called lymphocytes. Scientists typically then process all cells together in bulk, and harvest the relevant DNA and RNA to look for HIV. While effective for HIV strains that thrive in the blood and replicate happily in a petri dish, the technique cannot easily detect the subtle signs of the rarer HIV strains that hide in tissue and may resist treatment. “We know almost nothing about virus strains that are important in the body but grow poorly in a dish,” says Gludish.

To solve this issue, Gludish and his colleagues designed a brand-new tool that would play well with the small tissue samples and reclusive strains of virus they were gathering from Malawi. “We want to unencumber the test and study the cells not in bulk, but on a cell by cell basis,” says Gludish, explaining that they wanted to avoid the need for high-volume samples and robust positive signals.

Past the tip of the iceberg

Instead, they engineered a hyper-sensitive reporter cell named TZM-gfp — which glows when it encounters even just one infected cell. “If there’s just one virally-infected sample cell, we can find it,” says Gludish. This enables scientists to directly study a single patient-derived infected cell and the virion particles within it, a level of detail that until now had not been available to HIV research.

This tool now enables scientists to look past “the tip of the iceberg,” of HIV infection in the body and to cast a wider net to examine these tissue reservoirs of HIV and the rarer strains of the virus that live there. “These cells may harbor very little HIV — virus that may not grow well in standard HIV cell culture — but they are just as dangerous,” says Gludish.

The tool also opens new doors for studying other poorly-understood viruses — including the infamous SARS-CoV2.  “The concept is applicable to any type of virus,” says Gludish. “While the molecular strategy would be different for coronavirus, the guiding principles are the same.”

In fact, Gludish received a Cornell Rapid Research Response SARS-CoV-2 Seed Grant  from the Office of the Vice Provost for Research to pursue the use of a similar tool in studying coronavirus.

“Our goal has been to provide a platform where you can take tissue or samples directly from the patient, put it in culture, and study those actual cells without having to engineer or really change anything,” says Gludish. “Eventually, the objective is to make this adaptable to any human viral isolate, so that scientists can directly study new or emerging strains of virus right from patients — even in a pandemic — without any other bias or steps involved. The less we change the system, the more specific we can be in our studies or in screening for drugs.”

The study was done in partnership with Queen Elizabeth Central Hospital, of Blantyre, Malawi and the Liverpool School of Tropical Medicine. Funding for the research came from the National Institute of Allergy and Infectious Diseases, the Wellcome Trust, the Bill & Melinda Gates Foundation, and the UK Medical Research Council.