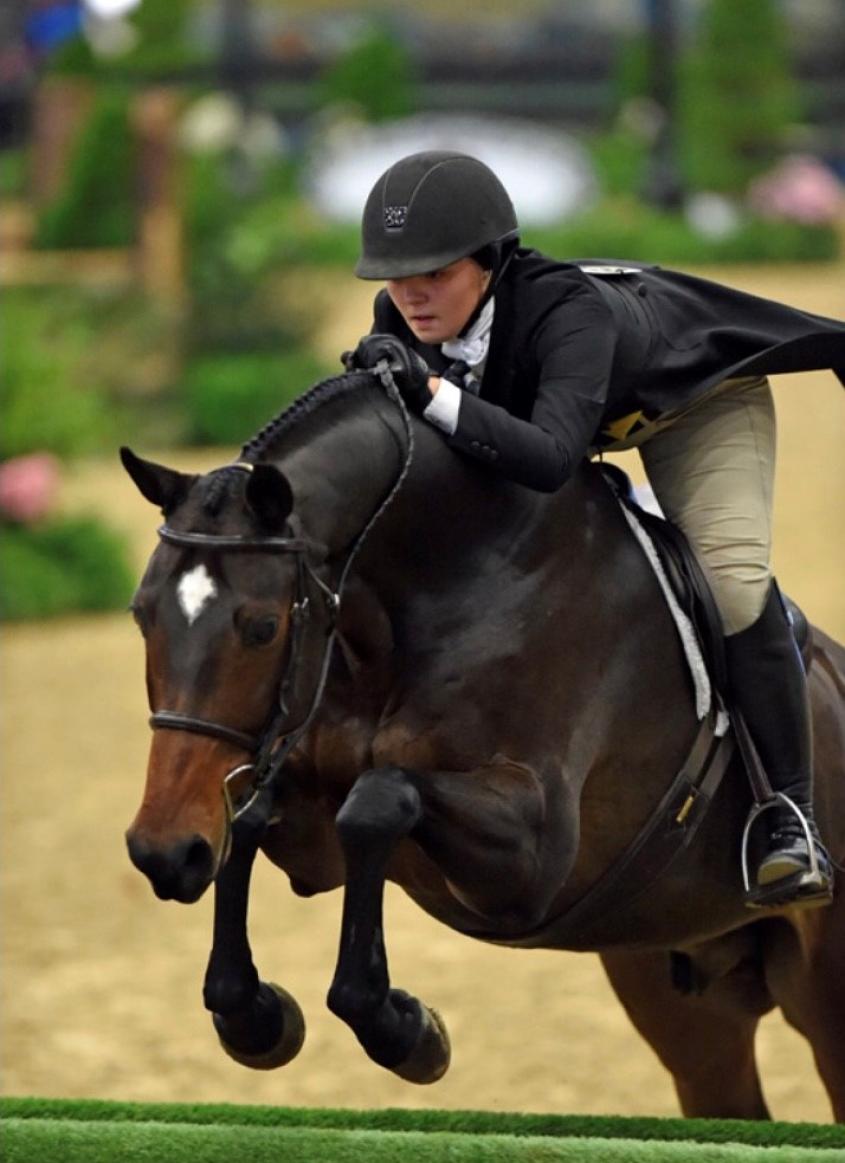 Crisp's award-winning career was nearly cut short when he developed immune-mediated keratitis in his right eye. Thanks to clinical partnerships between Cornell and referring veterinarians, the horse is performance-ready once again. Photo provided.

Anyone watching Crisp and his rider Christine Ruh claim the Adult Amateur Hunters title at the World Equestrian Center – Ocala this past March might not have guessed that the horse had only recently recovered from surgery. Just two months prior, Crisp had been treated for immune-mediated keratitis – a chronically inflamed cornea – at Cornell University’s Equine Hospital.

“Crisp’s performance is a real testament to the fantastic care he received from his veterinarians at home and at Cornell,” said Susan Schoellkopf, executive director of the Buffalo Therapeutic Riding Center (BTRC), which owns the horse. “They all worked together beautifully.”

Crisp started his promising career by winning the Pre-Green Incentive Finals with acclaimed hunter rider and trainer Hunt Tosh in 2013. But when the then six-year-old warmblood gelding developed immune-mediated keratitis in his right eye, his owners, Ceil and Kenny Wheeler, donated him to BTRC. The horse’s easygoing personality was a good fit for the center’s accredited therapeutic riding program for children with special needs. After a year of gentle walking and trotting, his health had improved enough for him to reenter the competition scene, where he won numerous titles with teenager Emma Walters – he was champion and grand champion in the 3’3” Junior hunters at the National Horse show in 2018 – and several other riders.

All the while, Crisp’s eye condition persisted. “Immune-mediated keratitis is a poorly understood condition,” said Ann Dwyer, D.V.M. ’83, equine ophthalmologist and Zweig committee member, who has been treating the horse’s eye at the Genesee Valley Equine Clinic in Scottsville, New York, since 2015. “We think that in some cases it follows some kind of injury or stimulus that causes the immune system to mount an inflammatory response within the layers of the cornea.” It is typically a lifelong disease that most often affects middle-aged to older horses and can significantly impair their vision.

In Crisp, the inflammation was in the superficial third of his right cornea, waxing and waning in severity. “Most of the time Crisp has appeared comfortable at his visits, but the episodes where the eye became quite cloudy were probably accompanied by reduced visual acuity,” Dwyer said. She coordinated the horse’s care with his primary veterinarian, Dr. Jeanne Best, who runs Royalton Equine Veterinary Services in Lockport, New York with Victoria Bentley, D.V.M. ‘01, tailoring a course of first-line treatments to match the changing severity of opacity in the horse’s eye. They included daily topical anti-inflammatories and immune-modulating drugs as well as occasional systemic anti-inflammatory medications. Dwyer also regularly consulted with the ophthalmology team at Cornell with photos and requests for input from Ruttenberg Senior Lecturer Dr. Nita Irby and assistant clinical professor Dr. Kelly Knickelbein, both in the Department of Clinical Sciences. As part of the management of Crisp's corneal inflammation, Irby placed episcleral cyclosporine implants – tiny drug-containing reservoirs placed in the outermost layer of the eye –  to allow for constant release of this immune-modulating medication to the surface of the affected eye.

This collaborative approach worked well for several years to prevent the need for surgery – not least because of Crisp’s exceptional personality. “Not only is he movie star handsome, he is also extremely kind and easy to work on,” Dwyer said. “Unlike many horses, Crisp did not resist treatment with eyedrops or ointments.” But by the beginning of this year, an increase in severe flareups and reduced responsiveness to medication convinced Dwyer that the time for surgery may have arrived. She referred Crisp to her colleagues at Cornell.

The diagnosis was confirmed with in vivo confocal microscopy, a noninvasive imaging technique performed with sedation. Use of this method in horses was pioneered by Dr. Eric Ledbetter, professor and section chief of ophthalmology in the Department of Clinical Sciences. “It is the gold standard diagnostic to rule out fungal infection of the cornea, which can have a similar appearance and clinical signs, and is also used to definitively diagnose immune-mediated keratitis,” Knickelbein said. The ophthalmology team at Cornell found that Crisp’s condition was localized to the outermost layers of the cornea, making him a good candidate for surgical removal of the affected area, known as keratectomy.

Dwyer was confident the horse would be well behaved during a standing procedure (with local anesthesia and heavy sedation), but the surgical team had to navigate a different challenge: Crisp had undergone colic surgery at Cornell only half a year prior. “Crisp’s colic case was fairly unique as there were a lot of body systems to consider,” said Dr. Amanda Craven, who is completing her residency in large animal medicine at CVM. “He had involvement of his kidneys, gastrointestinal tract, eyes, and heart.” So when it came to his continued care post-operatively, veterinarians from equine medicine and surgery, ophthalmology and cardiology worked together. “It was quite collaborative,” she said.

During the eye procedure, Knickelbein used microsurgical techniques to remove the most severely affected area of Crisp’s cornea. A subpalpebral lavage system – flexible tubing passed through the eyelid and secured to the face and mane – was used to deliver topical medication to the ocular surface postoperatively, and Best, Crisp’s primary veterinarian, checked in on him weekly. “He did very well following his eye surgery,” Knickelbein said.

By the time Dwyer paid Crisp a visit six weeks later at the World Equestrian Center in Ocala, Florida, where he was completing his recovery, she considered him ready to begin jumping again. “Crisp’s story is a model of collaboration and cooperation between his ‘home practice,’ our practice, and Cornell,” she said. “It is a true tale of persistence, dedication, and triumph with a very special horse.”