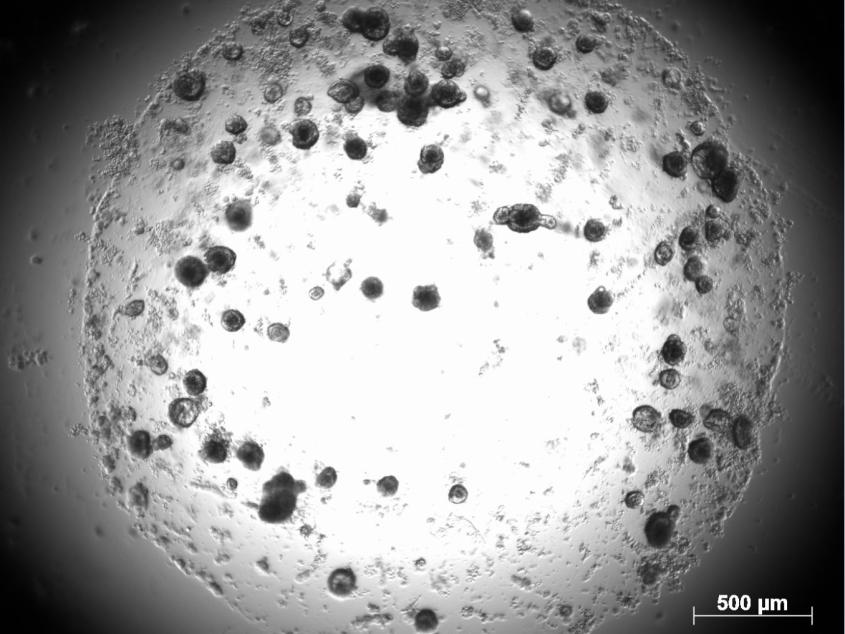 Personalized therapeutics are quickly becoming the future of modern medicine—increasingly, doctors can tailor treatments to tackle a patient’s specific genetic flaw or bolster a molecular strength. But understanding of each patient’s makeup is key. Now, researchers at the Cornell University College of Veterinary Medicine have revealed in the December 2022 issue of BMC Genomics how different combinations of gene mutations can affect the activity of regulatory molecules, called micro RNAs (miRNAs), that in turn can shape colon tumor development.

Colorectal cancer is estimated as the third-most diagnosed cancer and second leading cause of cancer-related death in the world. “A major challenge in treating patients is that the molecular differences between tumors can drastically impact the efficacy of commonly used therapeutics,” says Jonathan Villanueva, first author on the paper and graduate student in the lab group of senior author Praveen Sethupathy ’03, associate professor of biomedical sciences.

Fortunately, personalized medicine is already advancing therapeutic strategies for treating colorectal cancer patients. Doctors can now screen patient tumors for specific genetic mutations, allowing them to determine if a patient will respond well to certain types of therapies. A common example is how KRAS mutations affect colon tumor responsiveness to anti-EGFR therapeutics. “This example is just the beginning of personalized approaches to treating colorectal cancer,” Villanueva says. He and his colleagues in the Sethupathy lab are hoping to take things a step further.

“Traditionally, studies that look at the effect of oncogenic mutations on gene regulation have focused on the impacts of individual gene mutations,” says Villanueva. “However, patient tumors consist of tens to hundreds of gene mutations.” These diversified gene mutation combinations result in aberrations in the molecular machinery that regulate the gene expression—like miRNAs. “Our work sheds light on how different mutational combinations affect miRNA expression.” Previous studies have already shown that abnormal activity of certain miRNAs can initiate and/or exacerbate disease phenotypes, including cancer. Thus, the team was interested to see how different combinations of oncogenic mutations affect miRNA regulators of colon tumor development.

To do this, Villanueva and colleagues used genetically modified mouse organoids that mimic the cellular properties of the human intestine as models for colorectal cancer, which were provided by the Dow lab at Weill Cornell Medicine.  These organoid models harbor gene edits that recreate mutations that commonly occur in colorectal cancer patients. Using small RNA-sequencing, the scientists identified how these different combinations of mutations affected the expression of tumor suppressor and oncogenic miRNAs. The investigation yielded data that the team has shared publicly through an online application called ME-MIRAGE.

Chief among the findings was that modification of the Tgf-β/Smad4 signaling pathway is sufficient to drive changes in the expression of miR-375-3p, a tumor suppressor miRNA.  “We think that a miR-375-3p mimic could be a candidate therapeutic target,” says Villanueva, “especially for patients with mutations that inhibit Tgf-β signaling.”

They also discovered that, compared to control organoids, mutant organoid models had high levels of a certain miRNA, miR-24-3p. “When we looked at human tumor data from The Cancer Genome Atlas, we confirmed that this miRNA is elevated in CRC tumors relative to non-tumors,” says Villanueva.

The scientists decided to take a closer look at this culprit miRNA, running functional evaluations in multiple cell models, and found that miR-24-3p promoted cancer cell survival. As miR-24-3p is a regulatory molecule, Villanueva was keen to determine which genes the miRNA acted on were involved in cancer expression and identified two suspects: PRSS8 and HMOX1. “We predict that these two genes are tumor suppressors in colorectal cancer,” says Villanueva. “When miR-24-3p is elevated, in CRC tumors, it dampens the effects of these tumor suppressing genes, which in turn results in the persistence of colorectal cancer.”

In the future, these findings could lead to new, targeted therapeutics for patients. “You can imagine taking a biopsy from a patient and identifying what mutations exist in a patient’s tumor,” says Villanueva. Using this information, scientists could infer which oncogenic miRNAs are contributing to tumor development and progression. With that information, one could then utilize miRNA-based therapeutics to specifically target miRNAs of interest. “This would allow us to customize the treatment strategy to the biology of the patient’s tumor, which would be an important step for the advancement of precision medicine,” Villaneuva says.

Future steps for the team will be to continue profiling mutation-specific changes in miRNAs by expanding on the mutational combinations they study. Additionally, the team seeks to investigate how certain combinations of mutations might affect miRNAs and other regulatory mechanisms. “Then we can look and see how different regulatory mechanisms and miRNAs regulate one another to drive tumor phenotypes in various genetic contexts,” says Villanueva.