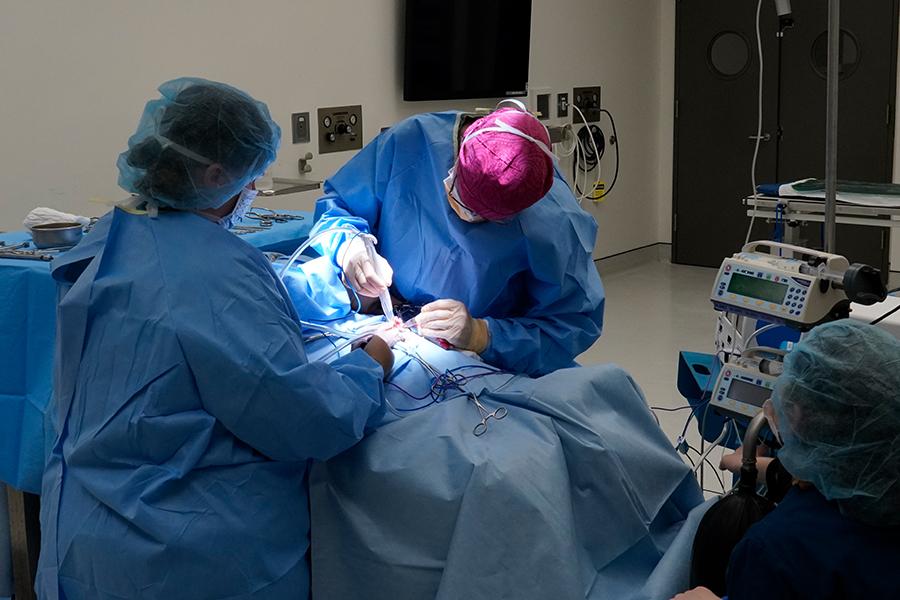 Our surgeons are joined by anesthesiology specialists, who supervise all procedures before and during operations. Our services are integrated with other specialties across the hospital and we frequently seek out consultations and referrals to ensure your pet receives comprehensive care. Surgical patients recover in our 24-hour staffed Intensive Care Unit, where they receive round-the-clock monitoring, intravenous fluid therapy and pain management.

This condition affects the windpipe, or trachea, of toy breed dogs such as Chihuahuas, Maltese, Yorkshire terriers, toy poodles. In some dogs, the trachea becomes very soft over time - causing a chronic honking cough and, if severe, difficulty breathing and even collapse. Mildly-affected dogs respond to medical management such as anti-cough medication. Severely-affected dogs require surgically-implanted supports for the trachea to prevent it from collapsing.

We offer a minimally-invasive treatment for the condition in which a self-expanding stent is placed in the collapsed region of the trachea. To find out if a dog is an appropriate candidate, we do fluoroscopic and endoscopic examination of the trachea to look for any areas that collapse.

For dogs who do have a collapsing trachea, the stent can be inserted through the mouth and down the throat while the dog is anesthetized. The stent must be properly sized and placed with care. Most dogs see a marked improvement once they recover from anesthesia, with easier breathing and a resumption of their normal activity level. In a small number of dogs, the stent causes a mild irritation that leads to a lingering cough, which eventually subsides as the stent becomes incorporated into the wall of the trachea.

Occasionally, traumatic wounds in dogs or cats become severely contaminated or compromised and progress into large, non-healing wounds. Traditionally, we have treated these wounds with prolonged bandaging and antibiotic therapy. We now have the capacity to speed up the healing of chronic wounds using a new technology called Vacuum Assisted Wound Treatment, or VAC treatment.

The therapy makes use of a special vacuum and bandaging system that encloses the wound in negative pressure, which draws away discharge and promotes the formation of healthy tissue in less than half the time that it would normally take. Although large contaminated wounds can still take many days to completely heal, the VAC treatment decreases the time needed and provides a better outcome.

The ureters are tubes that normally transport urine from the kidneys to the bladder. In a dog with ectopic ureters, one or both ureters bypass the bladder and connect into the urinary tract beyond the bladder sphincter, causing urine to constantly dribble out of the urethra. Ectopic ureters are the most common cause of congenital urinary incontinence in dogs.

Ectopic ureters are diagnosed with the help of an ultrasound examination of the urinary tract and endoscopic examination of the urethra and bladder under general anesthesia. Surgical reimplantation of the ureters into the bladder is recommended for dogs with confirmed ectopic ureters. Approximately 75 percent of dogs who undergo this surgery become continent, sometimes with the help of medical treatment as well. The remaining 25 percent of dogs have residual incontinence due to abnormalities of the bladder neck and may need further surgery to help with this.

We offer a minimally-invasive alternative for treatment of ectopic ureters that uses a laser introduced through the cystoscope, which allows us to relocate the opening of an ectopic ureter into the bladder without making any external incisions. The results of the laser surgery are as good or better than conventional surgery and the recovery period is quicker and more comfortable for our canine patients.

Gastric dilatation-volvulus (GDV) is a life threatening spontaneous twisting of the stomach that can happen in large and giant breed dogs. An estimated 40 percent of Great Danes will suffer from GDV during their lifetime. Large to giant breed dogs who are fed one large meal per day are predisposed to this condition, which results from a chronic stretching of the stomach. If the stomach stretches excessively and becomes over-distended from a large meal, it can twist and become locked in a twisted position. This traps a large volume of blood in the stomach. The distended stomach can fill the entire abdomen, preventing blood from returning to the heart and sending the dog into shock. The stomach can become the size of a basketball and even rupture within the abdomen. Affected dogs are severely uncomfortable, have a greatly distended abdomen, and gag repeatedly as they unsuccessfully attempt to vomit.

Treatment is emergency surgery after initial treatment for shock. In surgery, we decompress and untwist the stomach, and then tack the stomach to the body wall so that it cannot twist in the future. This is a high risk situation if the dog is in shock, and may require removal of part of the stomach if a section of stomach dies due to lack of blood supply. Thanks to our highly skilled emergency clinicians, anesthesiologists, and surgeons, our survival rate for GDV emergency surgery is greater than 90 percent - much higher than the 70 percent reported success rate.

GDV can be prevented by surgically fixing the stomach to the abdominal wall - a procedure called a gastropexy - so that the stomach cannot twist. Gastropexy can be done prophylactically in young dogs, but the standard procedure involves a fairly large abdominal incision. We offer a minimally-invasive method to tack the stomach using a laparoscopic technique. Two small incisions are needed for the procedure. Animals who undergo this procedure are more comfortable immediately after surgery and recovery more quickly.

Chronic ear infections leading to narrowing of the ear canal

Infections of the external ear canal are very common in dogs. Fortunately most of these infections respond to medical therapy. Occasionally, however, the infections become chronic and insidious, inducing inflammatory changes in the ear canal that lead to narrowing of the ear canal called stenosis. Some dog breeds, such as the Cocker spaniel, are predisposed to this condition. If the ear canal becomes completely stenotic and chronically infected, medical management can no longer be expected to help.

We offer a surgical solution to the chronically infected, painful, stenotic ear canal. This procedure is called a Total Ear Canal Ablation. In this surgery, we carefully remove all of the diseased tissue, including the external ear canal itself. The skin below the ear flap is closed over the defect producing an excellent cosmetic result. Removal of the diseased tissue results in a dramatic improvement in an affected dog’s demeanor. The powerful odor associated with chronic ear canal disease is removed and topical medication is no longer needed. Removal of the ear canal does reduce the ability of the dog to hear on the operated side, however, most dogs don’t seem to notice a difference because dogs with stenotic, infected ear canals have had impaired hearing due to their narrowed ear canals. Melanie Miller and her Jack Russell terrier, Branson, were traveling the day after Thanksgiving when Miller noticed something was wrong. Usually jovial, the seven-month-old puppy seemed to fade, his eyes began twitching, and he started tremoring in the car. Miller rushed him to a nearby emergency veterinary hospital, where doctors delivered intravenous medicine just in time to get the seizures under control.

Spoiled fish turned out to be the culprit. Fish can spoil quickly, and Branson had eaten leftover fish that had apparently grown mold laden with neurotoxins. For hours the situation looked uncertain. As soon as they stopped the medicine the tremors would start again, but with care and patience the tremors finally passed.

Yet that was just the beginning of Branson’s troubles.

“I noticed a large discolored patch on his belly that hadn’t been there before,” said Miller. “I wasn’t sure what it could be--maybe a reaction to the medicine? It looked really painful and he didn’t seem happy. When we got home to New York I brought him straight to Cornell.” Dr. Marc Hirshenson, third-year resident in small animal surgery, removed the dead skin before it could become infected. Using an innovative technique to discourage infection, Hirshenson also applied a special topical treatment called Manuka honey to help heal the wound. Well known for its antimicrobial properties, honey has been used by many cultures throughout history as a way to treat wounds and ward off infection. Manuka honey is produced by bees that feed on nectar from the manuka tree in New Zealand, and licensed wound-care products around the world use it as a special ingredient.

“There has been some evidence in humans that manuka honey is especially good for healing wounds,” said Hirshenson.

Over the next four days the wound improved, developing “granulation tissue” to help itself heal, a sign of a healthy body recovering. But the burn covered such a large area that it looked unlikely that it would fully close without surgery.

“Dogs have extra skin around their flanks, and their skin is relatively elastic,” he said. “We were able to stretch this extra skin to cover the area around the abdomen where Branson’s skin had burned and stitch it together around the middle.”

With careful manipulation of the excess skin they were able to close the wound, and after some rest and recuperation Branson was on his way to a full recovery.

“Our job is to help the body heal itself,” said Hirshenson. “Branson had an amazing attitude the whole time that really shined through. He put up with us for a long time, happy to let us handle him even when he was in pain, and was always enthusiastic about walking and eating. His demeanor contributed a lot to his recovery.”

Branson returned home in early December, where Miller reports he is back to his old self.

The American College of Veterinary Surgeons
A specialty organization that certifies veterinary surgeons and provides a source of referrals to pet owners.

Please bring any pertinent medical records or or your vet can send this information quickly and easily through our referring veterinarian portal, CUHA rVet Connect.